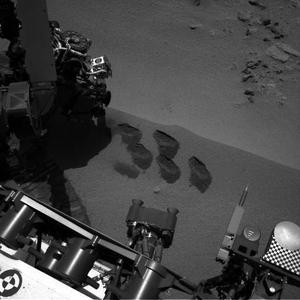 Written by Dr Michael Salla on November 30, 2012. Posted in science and technology Yesterday, NASA’s Jet Propulsion Laboratory (JPL) took the extraordinary step of dampening speculation over comments made by one of the leaders of the Mars Curiosity Mission. Just before Thanksgiving, on November 20, John Grotzinger, principal investigator of the Surface At Mars instrument on the Curiosity Rover, was quoted on NPR radio that a discovery had been made that would be “one for the history books.”  Many scientific observers took that to mean that he was about to announce that Curiosity had discovered organic compounds on Mars – the building blocks of life. In an interview with US News, JPL spokesperson Veronica McGregor says that Grotinsky had been “misinterpreted”. She said that there were definitely nothing significant about organic compounds in the results to be announced at a scientific conference next week being hosted by the American Geophysical Union in San Francisco. Rather than an earthshaking announcement, it appears that Grotzinger will be presenting much more mundane data and results about the Curiosity Mission – its working fine after a long flight from Earth! Did Grozinger simply overreach himself in commenting about the data and results from a soil analysis by the Curiosity Rover, or is he being muzzled by more senior NASA figures over what was exactly found on Mars?

Here is what McGregor said about Grotzinger interview on NPR radio that has created much media interest and internet speculation over the last week:

He was extremely excited and continues to be extremely excited that we had the first data coming back from our first sample and the machine is operating beautifully… This was the science team's equivalent of the landing moment. It was a key moment after years of work.

McGregor is saying that Grotzinger was merely excited that the Mars SAM instrument was working fine after the long trip to Mars, and that it was sending back good data. That was the history making element that Grotzinger was referring to, according to McGregor:

I think there was a misinterpretation of what he said. This is a scientist who was so excited his instrument was sending back data … John was extremely excited about having the first data back from SAM…. It’s very interesting data and the scientists are chewing on this—he does believe this mission will be one for the history books. But knowing these rumors [of organic compounds on Mars] were floating out there and knowing we didn’t yet have the results, we wanted to let people know that they’re definitely not in these initial samples…

We're getting data from SAM as we sit here and speak, and the data looks really interesting. The science team is busily chewing away on it as it comes down…. This data is gonna be one for the history books. It's looking really good.

What’s clear from Grotzinger’s own comments is that the data itself is “one for the history books,” not the Curiosity mission or the scientific process by which the data is being transmitted.

In claiming that Grotzinger’s comments were being misinterpreted and that he meant that it was the “mission”, not the “data” that was one for the history books, McGregor is being disingenuous. Did Grotzinger simply misspeak, setting off much speculation about the data results from one of the Mars Curiosity soil analysis experiments? Or is Grotzinger and his data being muzzled by NASA? One thing now appears certain. Nothing extraordinary will be announced at next week’s American Geophyiscal Union conference in San Francisco where Grotzinger will announce the results of a soil analysis by the SAM Rover instrument. Maybe there was nothing extraordinary to be announced all along; or, perhaps, NASA is muzzling something extraordinary that Curiosity has discovered on Mars.