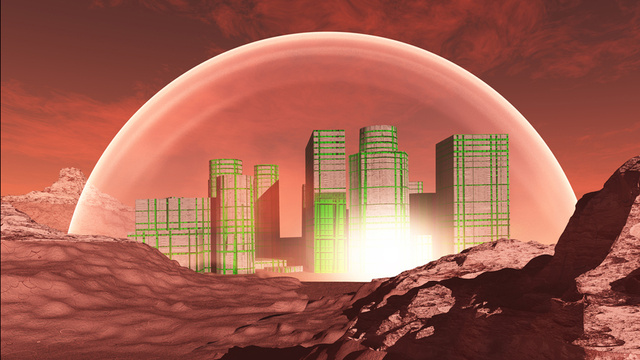 SpaceX to create Mars colony of 80,000 – antigravity technology would enable vision before end of decade

Written by Dr Michael Salla on November 27, 2012. Posted in science and technology In 1606, King James I of England granted the first Royal Charter to establish colonies in the New World. In a modern day reprise, Elon Musk, the founder of Paypal, Tesla Motors and SpaceX, plans to build a colony of up to 80,000 people on Mars. Taking a trip to Mars, if Musk has his way, would cost as little as $500,000. Musk revealed his long term plans in a November 16 presentation at the Royal Aeronautical Society. In an interview, Musk revealed that establishing a Martian colony was his ultimate objective, and “it always has been.” Given his recent space accomplishments, successfully sending an unmanned space vehicle to the International Space Station and back – Musk’s Mars vision is no idle pipedream. While it may take several decades to achieve his vision using conventional rocket propulsion technologies, this could be a new first for Musk. Or would it?

According to whistleblowers, elements of the US military possess a secret space fleet that uses antigravity technologies, and is already capable of interplanetary flight to Mars and beyond. A secret attempt to declassify antigravity technology by the Boeing Corporation during the Clinton administration failed. Apparently, the world’s leading aeronautical company was prevented from introducing the next generation of propulsion technologies for the aviation industry for national security reasons. There is also reason to believe that there was an unsuccessful attempt by the Obama administration, under his former national security advisor General Jim Jones, to have antigravity technologies declassified. One day in the not too distant future, currently classified antigravity technologies that will revolutionize the aviation and space industry will be released. Musk’s vision of a Mars colony would then come into fruition much more quickly than he can currently envision.

Elon Musk’s immediate plan is for SpaceX to send manned flights to the International Space Station in the next few years. With two successful missions to the ISS and back using his Dragon Spacecraft, there is little doubt that Musk will achieve his goal unless something unexpected happens. Musk will eventually turn his attention to Mars, and contemplate how to achieve his vision using existing propulsion technologies based on iquid fuel propellants. In his talk at the Royal Aeronautical Society, Musk said: “At Mars, you can start a self-sustaining civilization and grow it into something really big.” The main challenge is that present propulsion technologies make manned missions to Mars prohibitively expensive. NASA has dropped plans for a manned mission to Mar due to the 100 billion budget. With a yearly budget of only $19 billion, NASA would have to be part of an international consortium, and even then the overall cost might be too much. So can private space entrepreneurs such as Musk, succeed where governments cannot? Perhaps, but Musk would do so far more quickly if classified aerospace technologies based on antigravity principles were released.

Classified antigravity technologies have been kept from the public realm for over six decades while secretly developed by military-corporate entities. It was revealed in 1992, for example, that the B-2 Bomber used electrostatic charges on its leading wings and exhaust.  According to aerospace experts, this was confirmation that the B-2 used electrogravitic principles based on the Biefeld-Brown Effect.  The Biefeld-Brown Effect is based on the research of Thomas Townsend Brown who in 1928 gained a patent for his practical application of how high voltage electrostatic charges can reduce the weight of objects. The B-2 bomber employs sufficiently high voltages to significantly reduce its weight. This enables the B-2 and other classified antigravity vehicles to display flight characteristics that appear to defy conventional laws of physics.

During the early period of the Obama administration there may have been an attempt to have such technology declassified. The key Obama appointee for the attempt to introduce antigravity technology into the public sector was very likely General James Jones who was President Obama’s first national security advisor. After retiring from the Marines on February 1, 2007, General Jones served on the Board of Directors of the Boeing Corporation from June 21, 2007 to December 15, 2008. Boeing had been active at least since the early 1990’s in studies to apply antigravity technology for commercial use.

In 2002, an internal Boeing project called “Gravity Research for Advanced Space Propulsion” (GRASP) had been disclosed to the aerospace industry. A GRASP briefing document obtained by Jane’s Defense Weekly stated Boeing’s position: “If gravity modification is real, it will alter the entire aerospace business.” According to a 2008 book by Dr Paul LaViolette, Secrets of Antigravity Technology, Boeing completed a separate classified study for the U.S. military of electrogravitic propulsion recently before October 2007. Boeing was rebuffed in its efforts to have such technology declassified and released into the public sector. As a Board Director and member of Boeing’s Finance Committee at the time of the 2007 classified study, General Jones was privy to and supported Boeing’s efforts in antigravity research and development.

At the same time that Boeing was actively seeking to develop antigravity technologies for a new generation of aircraft, Jones became President of the Institute for 21st Century Energy. The Institute was created by the U.S. Chamber of Commerce with the following mission:

To secure America’s long-term energy security, America must reexamine outdated and entrenched positions, become better informed about the sources of our fuel and power, and make judgments based on facts, sound science, and good American common sense.

As Obama’s first National Security Advisor, General Jones was well placed to ensure that “new energy ideas” would be integrated into a comprehensive national security policy by the Obama administration. Unfortunately, Jones was stymied in his efforts to move forward with his new energy agenda, and was replaced in October 2010 less than two years after taking the job. As happened earlier during the Clinton administration with the Boeing Corporation, efforts to declassify antigravity technology for the civilian aviation sector had been stymied by powerful opponents.

There is little reason to doubt that space entrepreneurs such as Elon Musk could succeed in ambitious plans to achieve manned space flight to Mars, and eventually establish a human colony of up to 80,000 or more. Musk could become a modern day equivalent of William Penn and others granted Royal Charters by the English Crown that established colonies in the New World during the 17th century. The cost and time for achieving Musk’s Mars vision will take several decades using conventional rocket propulsion technologies. If antigravity technologies were declassified and released for commercial application, then Musk’s Martian colony could be brought into fruition much sooner – even before the end of this decade. A $500,000 ticket to Mars may not be that far off into the future after all!

Participate in a Poll on Antigravity Technology