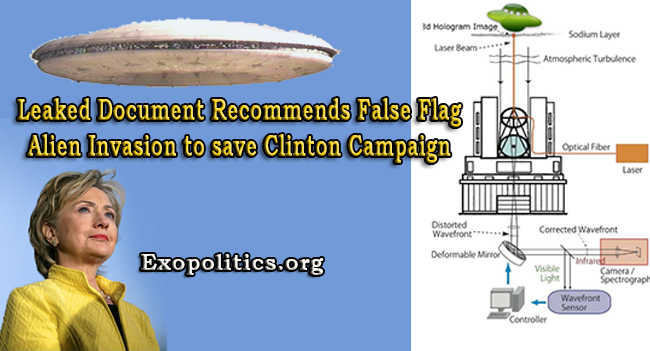 A document released by the Benenson Strategy Group on behalf of the Clinton Foundation reveals that Hillary’s Presidential Campaign is in dire straits due to mistrust over mainstream media coverage and polling. The document analyses a number of salvage scenarios and recommends one called FIRESIGN which is a false flag extraterrestrial invasion using advanced holographic technology.

The seven page document is titled “Salvage Program” was written less than a week ago, and was leaked by Anonymous on October 18, in a video, and later made available through the Before Its News website which has a questionable reputation for releasing accurate information. So is the document genuine?

The Benenson Strategy Group website describes itself as a “strategic research consultancy that marries language expertise with innovative research to frame choices so that your brand is the only answer.”

The document is headed by logos for both the Benenson Strategy Group and the Clinton Foundation.

Benenson Strategy Group has worked with the Clinton Foundation in the past to conduct internal polling, as Fox News reported in an October 16 story about Wikileaks. Joel Benenson, founder of the Group, is “currently the chief strategist for Hillary Clinton’s 2016 presidential campaign.” Here is what is further known about him:

the CEO of Benenson Strategy Group, a strategic consulting firm, and serves as a communications and polling advisor to the [Obama] White House. He has been a strategist for U.S. senators, governors and mayors, as well as Fortune 500 companies. He was a pollster for the DCCC in 2006, when the Democrats won back the majority in the House of Representatives. […] Benenson is also the Co-Founder of iModerate Research Technologies. In January 2015, Hillary Clinton hired Benenson and Robby Mook as strategists.

The Salvage Program document uses internal polling data from a survey of 2,021 adult Americans. It goes over the respective strengths and weaknesses of the Clinton and Trump Presidential Campaigns and paints a dire scenario for the Clinton campaign despite mainstream media fixation on allegations of Trump groping women.

The document begins its executive overview with the following:

At this point Donald Trump has both momentum and enthusiasm. Distrust in the mainstream media is blunting the impact of the collective polling narrative. As Election Day approaches, Hillary Clinton’s favorable ratings have crashed to historic lows (12%) in non-partisans and Donald Trump is consolidating support (97% of LV Republican-identifying respondents are either enthusiastic or very enthusiastic about voting for Trump).

One of the most damming statements in the document is the following:

On a disturbing note, some 70% of Republican-leaning voters are aware bussed-in voting, false-face operations, and dead-man’s-party registration drives. This may necessitate severe strategy changes for November.

This is supported by alternative media reports that Hillary’s campaign rallies are poorly attended, and that its plausible that large numbers need to be bussed in order to provide the illusion of popular enthusiasm.

The document goes on to analyze a number of aspects of the internal polling data, most of which is bad news for the Clinton campaign. It concludes that “Trump Voters are Virtually Unstoppable,” and that “The Public Has Lost Faith In Polling” which is viewed as a propaganda tool as the following extract shows: The Benenson document further reveals that mainstream liberal media has lost much legitimacy and that people are increasingly turning to social media for their information as the following diagram reveals: The recommended salvage option is FIRESIGN which uses holographic technology to create a religious “awe effect” as the following extract illustrates.

The recommended use of the FIRESIGN technology is to create the illusion of an extraterrestrial invasion which would allow the creation of an emergency situation that leads to a cancelation of the Presidential election. President Obama would subsequently hand power directly over to Hillary Clinton once the invasion is put to a stop. Many elements in the Salvage Program document appear to be based on an accurate analysis of prospects of the Clinton campaign succeeding as distrust in mainstream media and polling reaches unprecedented heights. The FIRESIGN technology has been well known to many UFO/exopolitics researchers who over several decades have described it as Project Blue Beam.

Nevertheless, there are a number of issues from the document that raise doubt about its authenticity according to the popular blog author, Kauilapele. These include the document using an old 2012 logo for the Berenson Strategic Group, and an incorrect street address being used for its Washington Office.These discrepancies may be indicative of a hoax, or included in order to introduce plausible deniability in case of any unintended leak.

While it is possible that the Salvage Program document is an elaborate hoax, it is also very possible that a majority of the information in it is genuine. If so, then Clinton’s Presidential campaign may ultimately rely on a false flag extraterrestrial invasion, which might be a factor in why she and her campaign chair, John Podesta, have repeatedly raised the UFO issue during the election campaign.

[Update 10/22/16. The article was updated with the Youtube video of the original Anonymous release of the document with commentary, more information about the founder of the Benenson Strategy Group and a response to an article by the author Kauilapele where he expresses several doubts about the Salvage Program document]