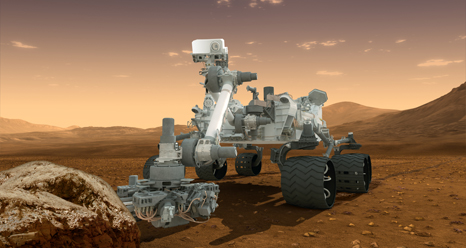 Curiosity lands on Mars – a step forward or backward in finding life?

Written by Dr Michael Salla on August 6, 2012. Posted in science and technology Early this morning US Eastern Time, the Mars Science Laboratory (aka Curiosity rover) successfully landed on Mars. “Curiosity's main assignment,” according to NASA, “is to investigate whether its study area ever has offered environmental conditions favorable for microbial life.” To achieve its two year exploratory mission, the nuclear powered Curiosity carries 15 times as much scientific equipment as on previous Mars rovers.  Curiosity will analyze samples of soil, rocks and atmosphere on the spot and transmit results back to NASA scientists. NASA claims that “Curiosity is a bold step forward in learning about our neighboring planet.” Importantly, according to Doug McCuistion, director of the Mars Exploration Program at NASA Headquarters in Washington, D.C., "This mission transitions the program's science emphasis from the planet's water history to its potential for past or present life."

If you are interested in learning about the possibility of current life on Mars, Curiosity is not designed to answer that question. Why not you may ask? According to NASA, the inconclusive results of past NASA experiments of current microbial life on Mars meant that there was no point repeating such experiments and risk new scientific controversy. NASA has a right to be concerned since controversy over the Viking Lander experiments in 1976 has not gone away. According to a scientific study published in April 2012, the Viking experiments successfully detected life after all. All this makes NASA’s current emphasis on seeking whether conditions ever existed on Mars for life look rather trivial, and a step in the wrong direction.

Here is what self-congratulatory Press releases from NASA over Curiosity’s successful landing won’t tell you. In April 2012, a team of scientists and mathematicians analyzing data from the 1976 Viking Mission concluded that life on Mars was detected in one of the four experiments conducted by the two robotic landers. Their report, “Complexity Analysis of the Viking Labeled Release Experiments,” released in the International Journal of Aeronautical and Space Sciences resurrected the controversy over results of the Viking Mission’s “Labeled Released experiment” designed by Dr Gilbert Levin. The Viking mission was the only Mars mission so far that was designed by NASA to detect life. Dr Levin was confident that the experiment had detected microbial life on Mars, but his NASA colleagues disagreed and his startling finding was forgotten in the Martian sands of time. This new scientific investigation has concluded that Levin was right all along.  Here is what the team of scientists concluded in their 2012 report:

The only extraterrestrial life detection experiments ever conducted were the three which were components of the 1976 Viking Mission to Mars. Of these, only the Labeled Release experiment obtained a clearly positive response…. We have applied complexity analysis to the Viking LR data….We conclude that the complexity pattern seen in active experiments strongly suggests biology while the different pattern in the control responses is more likely to be non-biological….These analyses support the interpretation that the Viking LR experiment did detect extant microbial life on Mars.

So why has NASA not designed any new experiments for detecting current life on Mars? That’s the 2.5 billion dollar question that should be asked with the Curiosity mission and budget. Are we really expected to believe that after more than three decades since Viking, NASA still can’t design an experiment to conclusively answer whether or not life currently exists on Mars? Rather than Curiosity being a “bold step forward in learning about our neighboring planet,” it looks like an expensive step backwards to avoid renewed scientific controversy over whether or not life exists on Mars.