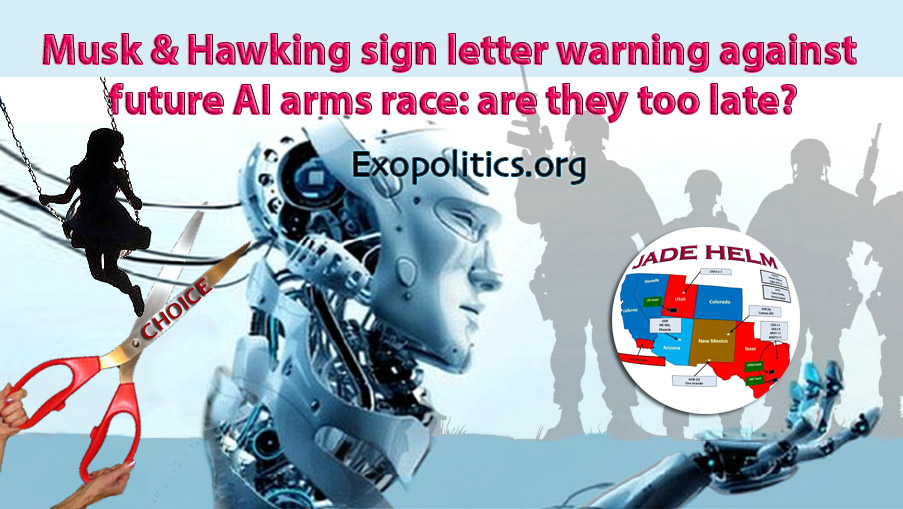 Written by Dr Michael Salla on July 28, 2015. Posted in science and technology

On Tuesday, during the 24th International Joint Conference on Artificial Intelligence (AI) in Buenos Aires, Argentina, an open letter signed by 1000 leading AI and robotics researchers along with public figures such as Elon Musk, Stephen Hawking and Apple co-founder Steve Wozniak, was released that recommended banning autonomous AI weapons. The researchers advised against such a development which could spur a future AI arms race that would be detrimental to humanity’s long term survival. Their letter appeared only nine days after the Jade Helm 15 military exercise was launched in seven US states, and is claimed to be using AI quantum computing to make battlefield decisions. Are Musk, Hawking and the other AI researchers too late?

The letter is titled: “Autonomous Weapons: an Open Letter from AI & Robotics Researchers.” It describes the military interest in the development of AI autonomous weapons:

Autonomous weapons select and engage targets without human intervention. They might include, for example, armed quadcopters that can search for and eliminate people meeting certain pre-defined criteria, but do not include cruise missiles or remotely piloted drones for which humans make all targeting decisions. Artificial Intelligence (AI) technology has reached a point where the deployment of such systems is — practically if not legally — feasible within years, not decades, and the stakes are high: autonomous weapons have been described as the third revolution in warfare, after gunpowder and nuclear arms.

The letter goes on to explain why AI weapons should be banned:

The key question for humanity today is whether to start a global AI arms race or to prevent it from starting. If any major military power pushes ahead with AI weapon development, a global arms race is virtually inevitable, and the endpoint of this technological trajectory is obvious: autonomous weapons will become the Kalashnikovs of tomorrow…. Autonomous weapons are ideal for tasks such as assassinations, destabilizing nations, subduing populations and selectively killing a particular ethnic group. We therefore believe that a military AI arms race would not be beneficial for humanity.

Indeed, chemists and biologists have broadly supported international agreements that have successfully prohibited chemical and biological weapons,… we believe that AI has great potential to benefit humanity in many ways, and that the goal of the field should be to do so. Starting a military AI arms race is a bad idea, and should be prevented by a ban on offensive autonomous weapons beyond meaningful human control.

The Jade Helm 15 military exercise began on July 15 and runs to September 15. It uses quantum computing technology to remove the human element from top-level control over battlefield decision making. According to a network/software engineer using the abbreviation, “DJ” Jade Helm is a test to see how successful AI is in anticipating civilian responses to military efforts to assert hegemony over a domestic battlefield scenario where civilians are in open revolt. If successful, Jade Helm will enable elite policy makers to eventually replace human generals and admirals with AI quantum computers programmed to master the ‘human domain’ which is defined as the “’physical, cultural and social environments’ that exist within a conflict.”

“JADE” is an AI quantum computing technology that produces holographic battlefield simulations that has the ability to use vast amounts of data being collected on the human domain to generate human terrain systems in geographic population centric locations to identify and eliminate targets, insurgents, rebels or whatever labels that can be flagged as targets on a Global Information Grid in Network Centric Warfare environments.

The JADE II battle field system is cognitive and intuitive. It can examine prior executed battle plans and devise ‘new and better’ strategies to increase the ‘kill chain’. The II generation of JADE has the capability for two way communication with drones through the OCCOM technology which is one of the next generation integrations to this system.

In short, JADE HELM is not battles directed by Generals and Military Commanders, but by a computer. It is a cognitive software based Network Centric Warfare System at the HELM.

There are a number of industry papers and patents that support J.D.’s claims that Jade Helm 15 is in fact the testing of an AI quantum computer to take over battlefield exercizes by removing top level human participation. Jade Helm 15 therefore represents the kind of weaponization of AI that the signers of the Buenos Aires open letter were warning against. The warning by Musk, Hawking and others on the future development of “offensive autonomous weapons beyond meaningful human control” may be too late. The roll out and testing of Jade Helm 15 represents the start of an AI arms race where the human element is factored out in the final decision making process for the use of advanced weapons. The AI arms race has begun, the key question now is whether it can be stopped.