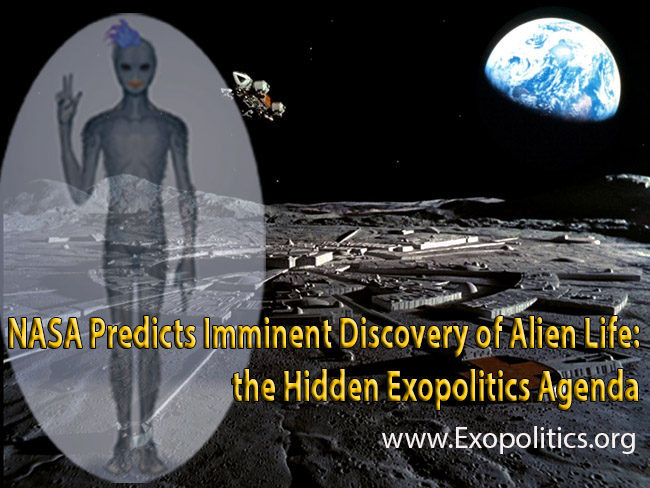 Written by Dr Michael Salla on July 30, 2015. Posted in science and technology On Tuesday, Dr. John Grunsfeld, head of NASA’s Science Mission Directorate told the House Science, Technology and Space Committee that extraterrestrial life is on the verge of being discovered. For many, Grunsfeld’s bold prediction was basically a pitch to the House Committee to increase spending levels for NASA’s space exploration missions, where recent successes by NASA in discovering water on other planets and moons in our solar system justifies more funding. Was his discovery prediction merely a pitch for more funding based on recent scientific discoveries, or is there a deeper ‘exopolitics’ agenda at play concerning the imminent disclosure of extraterrestrial life?

Are we alone? Many, many people on planet Earth want to know…. We are on the cusp of being able to answer that question.

The Huffington Post gave a summary of the recent developments concerning the discovery of water in the solar system:

There’s evidence of an interior ocean on Pluto. One of Jupiter’s moons has a global ocean beneath its crust that could contain more than twice as much water as Earth. There are at least half a dozen of these ocean worlds in our solar system alone — and where there’s water, there may be answers about the potential for life across the universe.

In addition, there was the recent discovery of a rocky exoplanet only 60% larger than earth that rotates around a sun similar to our own, in a comparable orbit of 385 days. Scientists said that the likelihood that Kepler has surface water, and therefore the right conditions for life to evolve is very good.

NASA’s recent scientific discoveries and bold predictions by Grunsfeld and other NASA officials lead to the conclusion that the public is being prepared for the imminent discovery of extraterrestrial life. Is this merely a result of genuine scientific advances in NASA’s ability to better detect the conditions for life in our and other solar system? Or is Grunsfeld’s prediction part of a deeper ‘exopolitics’ agenda driven by developments behind the scenes?

Beginning in early March 2015, there was an alleged meeting on the moon involving up to 70 private individuals along with about 120 officials representing different secret space programs and national governments who heard plans about disclosing the existence of extraterrestrial life. The meeting was addressed by an 8ft tall extraterrestrial called Raw-Teir-Eir who belongs to an alien race called the “Blue Avians” that is part of an alliance called the Sphere Being Alliance. The Sphere Being Alliance is allegedly intent on helping bring about full disclosure of extraterrestrial life.

Two of the individuals that attended that secret moon meeting have revealed themselves to varying extents. Corey Goode, who initially used the pseudonym GoodETxSG when his testimony first emerged in October 2014, publicly revealed himself in early April. The second individual, a military officer who uses the pseudonym Lt Col Gonzales, more recently allowed  summaries of two secret space program meetings he attended in June to be released. The summaries were Goode’s notes on the oral briefings Gonzales had given to Goode who did not attend the two meetings. Goode gave video testimony of the secret moon meeting held in March that both he and Gonzales attended which is available for free online at Gaia TV.

Goode’s and Gonzales’ testimonies suggest that public officials at NASA, the European Space Agency and other national space programs have been advised that plans are advancing quickly behind the scenes to disclose to the general public the truth about extraterrestrial life. In order to better prepare the world for the psychological shock of discovering that extraterrestrial life is real and that government institutions have been withholding this for decades, officials such as Grunsfeld are very active in playing up the imminent nature of a discovery of extraterrestrial life. Presentations such as Grunsfeld’s at the House Science Committee are a good opportunity to generate media interest in the implications of such a discovery while making it appear as though the only hidden agenda is a pitch for more NASA funding.

If Goode and Gonzales are correct, then there is a deeper exopolitics agenda behind Grunsfeld’s announcement. This agenda suggests that any NASA announcement about the discovery of extraterrestrial life is preparation for further disclosures about when alien life was first discovered, when it first made contact with humanity, and why this vital information was kept secret from the public for decades.

[Note: The first two episodes of Cosmic Disclosure are available for free on the Gaia TV website. The first episode is also on Youtube.  To watch the whole season of Cosmic Disclosure, you need to subscribe to Gaiam TV. If you subscribe using this link, then a portion of your monthly subscription will go towards supporting Corey Goode as he continues his disclosures. His  website is here.]