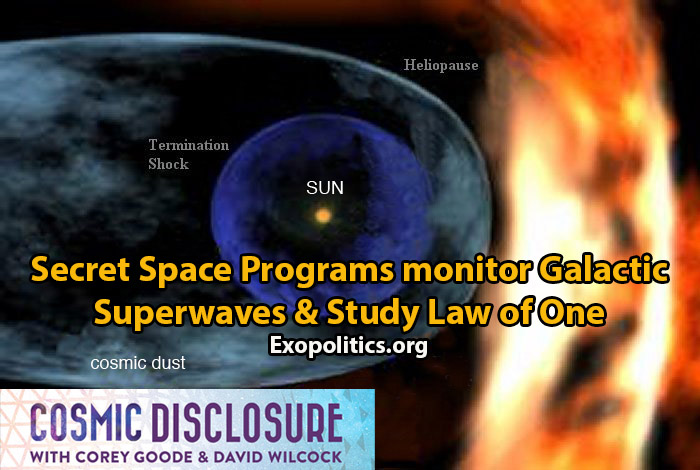 In the fifth instalment of the Cosmic Disclosure Gaia TV series, whistleblower Corey Goode reveals how secret space programs he worked with from 1987-2007 had become aware of regions of the galaxy with “superwaves” that would eventually be encountered by our solar system. It was discovered that the superwaves were made up of clouds of “vibrating energy particles” that would impact the sun, earth and humanity in ways leading to profound changes. Human consciousness itself would be directly impacted and would lead either to our rapid evolution into an advanced global society, or global self-destruction as apparently had happened in the past.

Goode says that in the late 1980’s giant spheres first began appearing in our solar system that were also interested in the superwave phenomenon. These spheres remained in an observational mode until 2011 when they became operational. The spheres ranged in size from the diameter of the moon to that of Jupiter. They were strategically placed to act as “resonance buffers” of galactic superwaves so the sun, and humanity, would not be overwhelmed as our solar system progressively entered into the affected region of the galaxy.

Goode’s revelation that galactic superwaves were secretly discovered and studied is stunning confirmation for the work of astrophysicist Dr Paul LaViolette who has predicted galactic superwaves eventually impacting our solar system. In his 2006 book Decoding the Message of the Pulsars, Dr LaViolette describes pulsars strategically placed in the galaxy that transmitted warnings about these superwaves that are generated out of the galactic core in cycles spanning from 10,000 to 16,000 years. LaViolette speculates that these pulsars were built by a very advanced Type III extraterrestrial civilization – one that understood how galactic superwaves operated, and their potential impact on solar systems and worlds.

In the rest of the Gaiam TV interview with David Wilcock, Goode described the evolution of consciousness and how the “Law of One Material” is essentially correct in affirming the underlying unity of consciousness and all life. Goode has previously revealed that the Law of One Material is required reading for a many groups in the secret space programs:

It was … a fact that certain groups in the SSP’s and Secret Earth Government Syndicates (Cabal/Illuminati) were required to read the Law of One and Seth Material while trying to discredit it to the public with the many “PsyOp Channelings” (which says a lot in itself) [FAQ48].

Goode reveals that President Eisenhower did indeed meet with extraterrestrial delegations in the mid-1950s concerned about nuclear weapons development as a number of other whistleblowers have claimed. Goode goes on to describe his own personal connection to the Blue Avian beings that have been cooperating with the Secret Space Program Alliance in creating a “full disclosure event.”

Goode’s explanation for how humanity’s co-creative consciousness is used against itself by ruling elites is well worth listening to, as well as the importance of core message delivered by the Sphere Being Alliance.

This suggests that we will very soon be experiencing the full force of these superwaves that will bring out the best or worst in all humanity depending on how well prepared we are. This new episode will help the viewer appreciate the importance of taking firm steps to prepare for superwave related events that secret space programs have themselves been silently preparing for over several decades now.

[Note: The first two episodes of Cosmic Disclosure are available for free on the Gaia TV website. The first episode is on Youtube (see below).  To watch the whole season of Cosmic Disclosure, you need to subscribe to Gaiam TV. If you subscribe using this link, then a portion of your monthly subscription will go towards supporting Corey Goode as he continues his disclosures. His  website is here.]