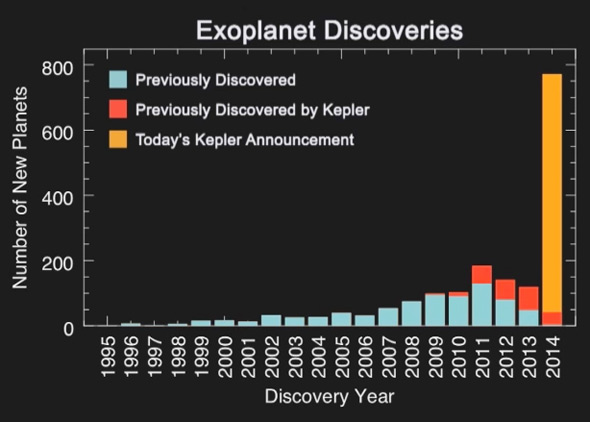 Written by Dr Michael Salla on February 27, 2014. Posted in science and technology NASA astronomers yesterday released a paper announcing the discovery of an additional 768 exoplanets using a new validation technique for data from the Kepler Space Telescope. This has nearly doubled the number of confirmed exoplanets from the previous tally of 941 to 1710. Most dramatically, the number of earth sized exoplanets increased by a factor of five, now making it clear that rocky earths are pretty common throughout the galaxy. Importantly, four of the exoplanets were confirmed to rotate in the habitable zones of their suns – zones where liquid water can exist and extraterrestrial life can flourish. The rapid increase in exoplanet discoveries has come from analysis of only two years of data supplied by the Kepler Mission. Analysis of an additional two years of available data is expected to increase the number of confirmed exoplanets even more dramatically than the latest NASA release. The new confirmation method used by NASA astronomers means that the likelihood of eventually finding exoplanets with extraterrestrial life becomes far greater than previously thought.

NASA astronomers adopted a two-step process for detecting exoplanets using data gained by the Kepler Space Telescope and 11 other currently operating space telescopes. A new generation of space telescopes along with Earth based telescopes promise to provide even more data about exoplanets and their atmospheres. The world’s largest optical telescope is scheduled to begin construction this year on the summit of the Mauna Kea volcano at the Big Island of Hawaii – an hour’s drive from where this article is being written. The new 30 meter telescope is designed to examine exoplanets and their atmospheres for tell tale signs of life. The detection of large amounts of oxygen, for example, would be confirmation for the existence of extraterrestrial life.

When an exoplanet is first detected as it either passes in front of (the transit method) or near enough to its sun to cause detectable wobble (the Doppler effect), it becomes a “candidate” until further data confirms its existence. Currently, there are more than 2500 exoplanet candidates. The length of time need to confirm exoplanets depends on the period of an exoplanet’s rotation around its parent star. As the exoplanet makes its second or subsequent passage in front of or near its sun, astronomers gain the additional data to learn whether or not a candidate exoplanet has been confirmed. So far, only two years of a four year data pool from the Kepler Space Telescope has been analyzed. As more data becomes available, additional exoplanet candidates are likely to be confirmed.

Out of the 768 exoplanets just confirmed, 106 are less than 1.25 times Earth’s diameter. Previously, the data from Kepler and other telescopes had only confirmed 20 earth sized worlds. The four newly confirmed exoplanets orbiting in the habitable zones of their suns were roughly twice the diameter of Earth. This almost doubled the total of exoplanets confirmed in habitable zones from five to nine. What the NASA astronomers didn’t consider, however, was a new way of defining what constitutes a habitable zone for extraterrestrial life.

In January this year, Scientists at the University of Aberdeen and University of St Andrews, Scotland, released a paper titled “Circumstellar habitable zones for deep terrestrial biospheres,” in the journal, Planetary and Space Science. In the paper they redefined the “Goldilocks Zone”, the optimal zone for life to exist on planets. They have found that life can flourish beneath a planet’s surface where liquid water can be found at varying depths. This is how the abstract described this new way of locating extraterrestrial life:

Using the idea of subsurface-habitability zone, many more than only four of the 768 newly confirmed exoplanets could be suitable hosts for extraterrestrial life. As astronomers continue to develop new techniques for confirming the existence of exoplanets, a new understanding for what constitutes a habitable zone is needed. Liquid water can exist either on or beneath the surface of an exoplanet, thereby making it possible for extraterrestrial life to flourish on many more exoplanets than previously thought possible.

In previous announcements of the Kepler Mission data, astronomers confidently predicted that it was only a matter of time before an exoplanet in the habitable zone of its sun would be found to host extraterrestrial life. New techniques for confirming exoplanets and new ways of defining a habitability zone make it even more inevitable that extraterrestrial life will eventually be detected on exoplanets using advanced space telescopes.