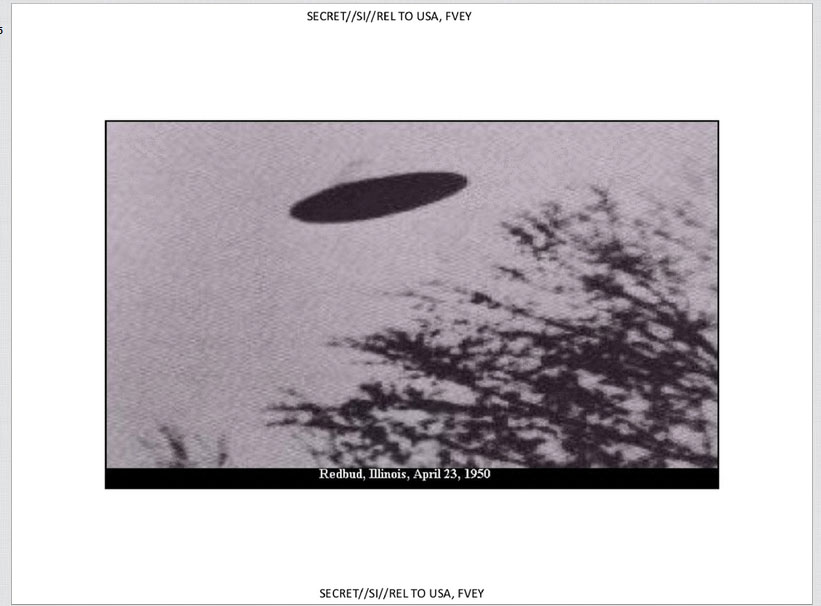 UFO photo in the Art of Deception, p. 35

Among the leaked Snowden National Security Agency (NSA) documents, the first to explicitly involve the UFO issue has just been released and is currently generating much media scrutiny. The 50 page document is a powerpoint presentation titled “The Art of Deception: Training for a New Generation of Online Covert Operations,” and was authored by the British equivalent of the NSA, the Government Communications Headquarters (GCHQ). The document was the subject to an in-depth story released this week by Glenn Greenwald, the journalist who first worked with Edward Snowden to release to the world official NSA surveillance of the general public, and foreign government officials.

The leaked document details how the NSA is working with its “Five Eyes” partners in Britain, Canada, Australia and New Zealand to train its operatives in online covert operations. Greenwald’s article exposes how the NSA and its Five Eyes intelligence partners encourage a range of psychological warfare tools to discredit any targets discussing sensitive national security information. In the “Art of Deception” document three of the 50 slides show images of UFOs – one of which dates from 1950.

The leaked document reveals a clear connection between online covert operations by the GCHQ and its intelligence partners on the UFO issue. It is smoking gun evidence that the international intelligence community is training its covert operatives to deceive the public on a range of sensitive national security issues including UFOs.

Greenwald released the GCHQ authored document in a story titled, How Covert Agents Infiltrate the Internet to Manipulate, Deceive, and Destroy Reputations.” He begins his story:

One of the many pressing stories that remains to be told from the Snowden archive is how western intelligence agencies are attempting to manipulate and control online discourse with extreme tactics of deception and reputation-destruction. It’s time to tell a chunk of that story, complete with the relevant documents.

Greenwald goes on to summarize the contents of “The Art of Deception” document, authored by a previously secret unit of the GCHQ called the “Joint Threat Research Intelligence Group” (JTRIG):

Among the core self-identified purposes of JTRIG are two tactics: (1) to inject all sorts of false material onto the internet in order to destroy the reputation of its targets; and (2) to use social sciences and other techniques to manipulate online discourse and activism to generate outcomes it considers desirable. To see how extremist these programs are, just consider the tactics they boast of using to achieve those ends: “false flag operations” (posting material to the internet and falsely attributing it to someone else), fake victim blog posts (pretending to be a victim of the individual whose reputation they want to destroy), and posting “negative information” on various forums.

… these GCHQ documents are the first to prove that a major western government is using some of the most controversial techniques to disseminate deception online and harm the reputations of targets. Under the tactics they use, the state is deliberately spreading lies on the internet about whichever individuals it targets, including the use of what GCHQ itself calls “false flag operations.”

The “The Art of Deception” document is now available online and reveals the wide array of psychological warfare tools used by the NSA and its Five Eyes partners for covert online operations.

The “Art of Deception” has three powerpoint slides that show UFO photos dating as far back as 1950. Greenwald did not discuss the three UFO photos in his story. The fact that the photos take up three of the 50 slides of the “Art of Deception” document indicates that the UFO issue is covered in some detail in the training of online covert operatives in the use of psychological warfare techniques.

This is not a surprise to any familiar with a 1953 report issued by a CIA convened panel investigating reports of flying saucers, as UFOs were widely known at the time. The Robertson Panel delivered a report, the Durant Report, that recommended debunking the flying saucer phenomenon and the possibility of extraterrestrial life, for national security reasons. The Report stated:

The “debunking” aim would result in reduction in public interest in “flying saucers” which today evokes a strong psychological reaction. This education could be accomplished by mass media such as television, motion pictures, and popular articles.… Such a program should tend to reduce the current gullibility of the public and consequently their susceptibility to clever hostile propaganda. The first of the three UFO images dates from Redbud Illinois in April 23, 1950 (see top). It was taken by a part-time photographer who took the photo while traveling through the area. It is included in a list of the best UFO photos ever taken. Despite its clarity, it was not included in the list of photos examined by the Robertson Panel that met less than three years later. The second image is screenshot of a video taken by Arturo Robles Gil in Mexico in 2005. The third image was taken near St Austell, Cornwall, England by a holidaymaker.

While there is no text accompanying each of the three images, they appear in a section titled “Strand 3: Influence and Information Operations.” This indicates that the training of intelligence operatives involves sophisticated tools of psychological warfare when it comes to shaping public perceptions on issues such as UFOs. The Art of Deception is smoking gun evidence that the UFO issue is covered in the training of covert intelligence operatives in how to discredit internet authors and articles discussing sensitive national security information.