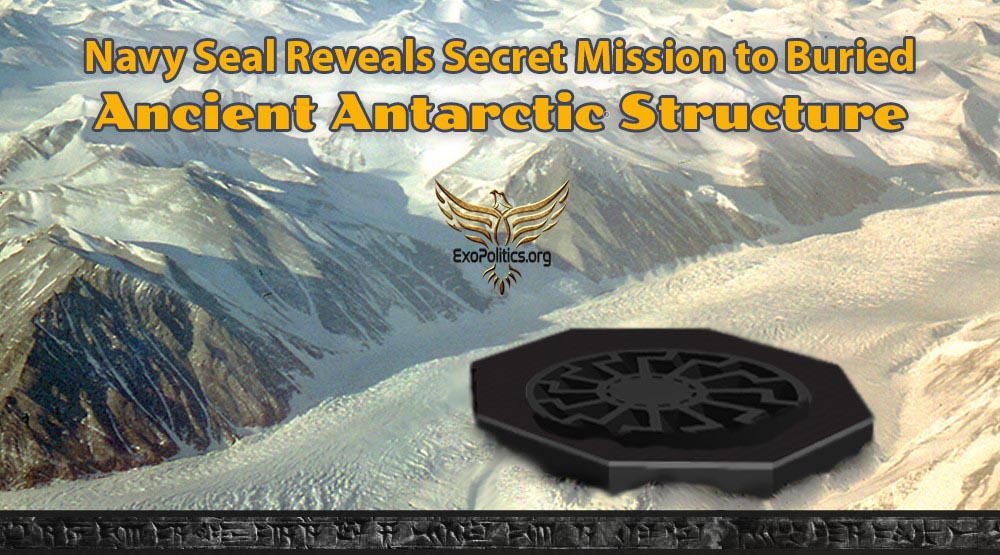 Written by Dr Michael Salla on January 29, 2019. Posted in Featured, science and technology

On January 23, Emmy award winning journalist, Linda Moulton Howe, released the video testimony of a new whistleblower discussing his highly classified mission to a large buried structure found in Antarctica. The whistleblower claims that in a classified mission conducted in 2003, he entered inside a very large octagon-shaped structure located near the Beardmore Glacier that extended down deep into the glacier’s icy interior.

The whistleblower is a retired U.S. Navy Seal who was first interviewed by Howe on July 19, 2018. He used the pseudonym Spartan 1 in Howe’s YouTube video where his face is shadowed out and his voice is altered to protect his identity. Howe says that she personally vetted Spartan 1, who provided ample documentation to substantiate his military career.

Previously, Howe has released the testimony of another military whistleblower, Brian, who was a Navy flight engineer who had flown numerous support missions with the Antarctic Development Squadron from 1983 to 1997. He witnessed a number of anomalies pointing to hidden facilities or bases located deep under the Antarctic ice sheets. He says he witnessed silver flying discs over the Transantarctic Mountains, not all that far, as Howe pointed out, from where the Navy Seal had conducted his mission. The Navy Seal says that ground penetrating radar had discovered the structure which was an eight-sided octagon, as Howe elaborated:

Another previous team of engineers and scientists had dug out the top layer of one octagon made of a pure black substance that was built on top of two more black octagonal structures that went down deep into the 2-mile-thick ice.

In the video the Navy Seal (aka Spartan 1) described the launch of his mission from an aircraft carrier voyaging near West Antarctica’s Ross Sea. He was taken by helicopter to McMurdo station, the largest U.S. base in Antarctica, and then taken by ground transport to the structure’s location.

Spartan 1 described entering a doorway approximately 50 feet under the ice. He estimated the walls of the structure as about 18 to 30 feet thick (6-10 meters) and the ceiling height at around 22-28 feet (7-9 meters). He said that the walls, ceiling and floor were made of a black basalt material that looked like shiny black marble.

The interior was heated to around 68-72 degrees Fahrenheit (20-22 Celsius), and was also lighted by a lime green source projected from the ceiling and floor. He did not see any heating or lighting equipment, which added to the mystery of the buried structure.

Only part of the structure, he stated, has been uncovered so far by the archeological teams, with the rest buried under the ice and extending far below. Ground penetrating radar had shown the structure to be an Octagon in shape, and covering an area of 62 acres (about 0.5 square kilometers).

Spartan 1 described the walls and doors as being covered by hieroglyphs that were about eight inches (20 cm) high and about two inches (5 cm) deep. The hieroglyphs were neither Egyptian nor Mayan, but appeared similar to both in terms of depicting animals and other strange symbols.

Significantly, one of the symbols was very similar to the Black Sun image used by the Nazi SS, who had a large version of it built on the floor of their headquarters at Wewelsburg Castle. The Black Sun image continues to be banned in Germany under their Nazi propaganda law. Howe said future episodes featuring Spartan 1 will return to the Black Sun symbol.

Spartan 1 explained that part of his mission was to transport scientists who would document the buried structure and the hieroglyphic symbols, by taking photos and making drawings. He said that his team had to leave one of the scientists behind who insisted that more time was needed to do a proper inventory of what was discovered.

Spartan 1 was told and believed that the structure had been built by a human looking group of extraterrestrials, who were involved in the genetic engineering of humanity.

Spartan 1’s testimony is very significant since it provides a rare eyewitness account of what is actually inside one of the buried structures whose age stretches back into antiquity. Howe’s previous Antarctica eyewitness, Brian, did not actually get to see or go inside one of the artifacts. The closest he got was when he saw a large hole going deep inside the South Pole, while flying overhead through restricted airspace.

To date, only two other whistleblowers/insiders have come forward to share their accounts of being taken inside or witnessing the ancient artifacts buried deep under Antarctica’s ice sheets. These are Corey Goode and Pete Peterson who both say they witnessed some of the buried artifacts during their respective visits there.

Goode claims to have been taken to Antarctica in early 2016 and 2017, where he saw secret bases and the remains of an ancient civilization buried deep below the ice sheets. He says he witnessed some bodies of human alien hybrids who were part of the genetic experiments conducted by a tall human looking extraterrestrial race thousands of years ago. He described three very large motherships buried under the ice that were used to start a global civilization with Antarctica as a hub.

Peterson says that he was taken to Antarctica during classified missions where he was tasked with the job of understanding the advanced technologies found near three motherships, one or more of which he witnessed during his missions. Peterson’s testimony corroborates Goode’s account of an ancient extraterrestrial base that was used as a hub for a global civilization. This raises some intriguing questions. Was the Black Sun symbol a pictorial representation of an ancient global civilization where the South Pole was the hub with spirals going out to its distant colonies? In the book, Antarctica’s Hidden History, I present evidence that German nationalists using the black sun symbol established a colony in Antarctica, where they built spacecraft for deep space colonization.

According to Howe’s analysis, the structure witnessed by Spartan 1 dates as far back as 33 million years, which is the general date conventional geologists give for when Antarctica was last ice free. In Antarctica’s Hidden History, contrary evidence is presented that Antarctica was ice free as recently as 11,700 years  ago, which is the approximate date for the destruction of Atlantis according to Plato. This raises the question, “how old are the ruins being currently discovered in Antarctica?”

Spartan 1’s independent testimony corroborates important elements of what Goode and Peterson described, and what others claim lies hidden under the frozen continent. As more of Spartan 1’s testimony is released through Howe’s video series, we may get important answers to questions about what lies hidden deep below the Antarctic ice sheets