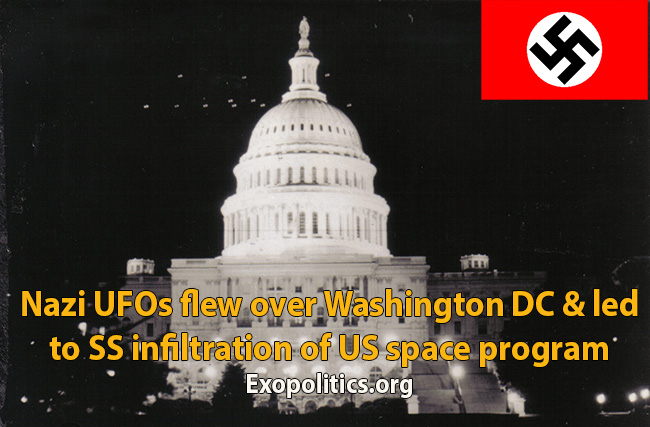 A second whistleblower has come forward to claim that Nazi flying saucers flew over Washington D.C. and other major U.S. cities in the early 1950s. These events allegedly led to secret negotiations with a surviving Nazi SS breakaway group based in Antarctica, and agreements resulting in their infiltration of a secret U.S. space program.

Clark McClelland had a 34 year career working for NASA and its aerospace contractors from 1958 to 1992, before his security clearance was not renewed due to his ongoing research into UFOs. McClelland spent much time working with Operation Paperclip Nazi scientists, and learned directly from them how the Nazi SS had survived the war, had built advanced spacecraft in Antarctica, and infiltrated the U.S. space program. McClelland’s remarkable testimony has just been released and corroborates the earlier disclosure of secret space program whistleblower Corey Goode, who made similar claims in May 2015.

The fleets of flying saucers seen over Washington DC on successive weekends in July 1952 have been among the best documented UFO cases ever. Thousands of witnesses, along with numerous photographs, radar trackings, and pilots all reported flying saucers over the nation’s capital on three successive weekends. Major Donald Keyhoe and other leading UFO researchers of the era thought the Washington flap was the best evidence yet of extraterrestrials visiting Earth.

The U.S. Air Force held a press conference on July 29, 1952 and Major General John Samford said that it was all due to a “temperature inversion”. Even President Truman became involved when he called on Project Bluebook for a report and was given the official Air Force explanation. Much of the media and general public were confused by the official Air Force explanation, but dutifully ignored the issue out of, ‘wink wink’, national security concerns. For over sixty years, the secret of who really flew over Washington DC and other major U.S. cities in 1952 has been withheld from the general public.

Now, two independent whistleblowers have recently emerged with another explanation that challenges the prevailing view of history. The Nazi SS had not been obliterated in World War II, as everyone had been told after the advance of allied armies into Berlin and the May 8, 1945 capitulation of the rump German government led by Admiral Karl Donitz. Instead, the Nazi SS had been successful in establishing remote bases of operations in Antarctica and South America to continue the secret development of flying saucer technologies, which in 1952 began overflights of major U.S. cities to intimidate the Truman administration into capitulating into Nazi SS demands.

In May 2015, Goode described how the Nazis had overflown the U.S. capitol in 1952 with their superior technologies, and pressured the Truman and Eisenhower administrations into negotiating a secret agreement:

… after the failed Operation High Jump Mission, the Operation Paperclip Scientists were asked to negotiate meetings… The NAZI’s used this to their advantage in some very public sorties over Washington D.C. and highly Secret Atomic Warfare Bases to mention a few. Eisenhower finally relented and signed a treaty with them … “NAZI Occult Societies” therefore infiltrated every single high tech corporation and position of power inside the now “Joint Break Away Civilization/Program”. They have been involved in all western space programs and projects ever since.

Goode’s controversial claims have just been corroborated by McClelland. In the August 3 instalment of his book, The Stargate Chronicles, McClelland writes:

The over flights of advance very swift crafts over Washington, DC were these German advanced aircraft that totally out flew American advanced crafts. On July 12, 1952, President Truman observed several of the UFOs and was completely amazed by their capabilities of outmaneuvering the USAF and US Navy advanced Jet fighter, the F-4D. USA jets sent up to bring one down. None could fly the speed of the German Saucers.

McClelland also corroborated Goode’s claim that the Nazi SS had infiltrated the U.S. space program through Operation Paperclip scientists, and continued to intimidate German scientists at the Kennedy Space Center (KSC) well into the 1960s: Some of the German engineers and technicians I met at KSC were all aware that a few of the German S.S. were working at Cape Canaveral and the Kennedy Space Center that arrived with Project Paper Clip with Dr. Von Braun in 1946. … These S.S. were as feared at KSC as they were in the German Army during WWII.

McClelland’s testimony is compelling support for Goode’s controversial claims of a Nazi breakaway civilization using advanced flying saucer technologies. Given the public documentation that McClelland has offered to support his whistleblower testimony, it is now far more difficult to dismiss his and Goode’s remarkable claims, which are examined more closely in the upcoming book, Insiders Reveal Secret Space Programs and Extraterrestrial Alliances. If McClelland and Goode are accurate, then world history will have to be rewritten as the truth finally emerges about who was really in control of those flying saucers over Washington DC in July 1952.