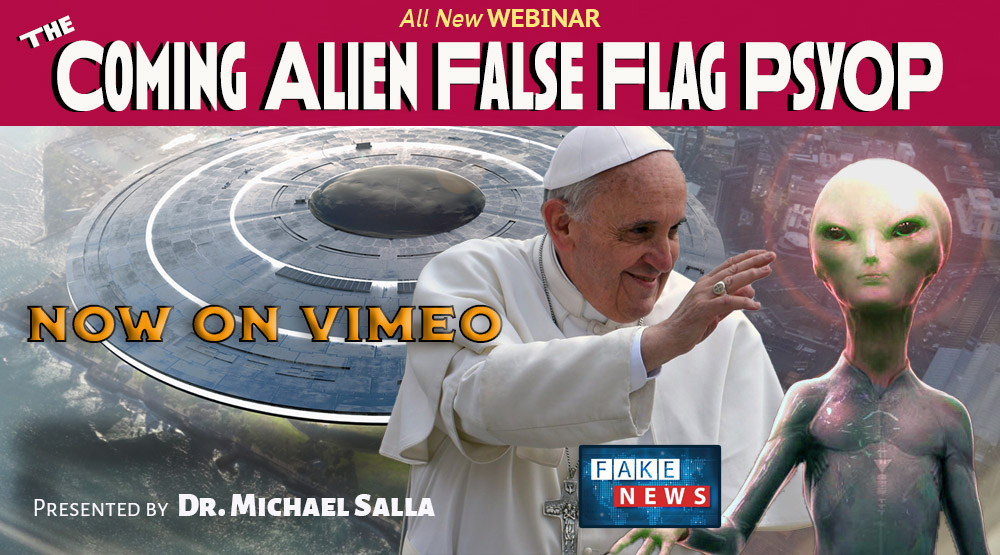 Below is a video featuring the highlights from the introduction to “The Coming Alien False Flag Psyop Webinar” held on Aug 1. The introduction covers history of alien false flag events beginning with the 1967 Report from Iron Mountain which analyzed the credibility of an attack from space involving an “extraterrestrial menace.”

Next i Dr. Werner Von Braun’s private comments to Carol Rosin in 1974 at Fairchild Industry about an alien invasion being the final card in a sequence of contrived events by the Deep State, which she publicly revealed at the 2001 Disclosure Project Press Conference. Next is the investigative reporting of Serge Monast who revealed Operation Bluebeam and its four steps in 1994.

The full Webinar is now available on Vimeo

I have just finished my powerpoint presentation for Sunday’s webinar on “The Coming False Flag Alien Psyop.” It will be a jam-packed presentation with lots of detailed information on the likelihood that the Deep State is about to play its final card in a behind-the-scenes power struggle over the control of humanity.

It’s long been known that a false flag alien invasion has been part of a sequence of events being planned by the Deep State, as Werner Von Braun privately warned about in 1974. In my presentation, I will discuss at length how the real agenda all along has been a false flag alien salvation event in which the Deep State, Vatican, Antarctic Germans, and negative extraterrestrial groups all collaborate, using their many embedded assets within the mass media and UFO community to deceive the rest of humanity.

The plan for an alien salvation event – “Project Bluebeam” –  has always remained a closely guarded secret. Thus, when Canadian Investigative Journalist Serge Monast began revealing its key aspects in 1994, thanks to insider tips, he had to be eliminated. He died in December 1996 at the age of 51 allegedly from a heart attack. Not surprisingly, his writings and public lectures included material on how heart attacks could be induced by psychotronic technologies possessed by the CIA. Only 11 months earlier in 1996, the legendary whistleblower Phil Schneider had also died in highly suspicious circumstances. It is a time proven fact that If one gets too close to the truth in the UFO field, the Deep State responds. To this end, it has many skilled assassins operating out of the S-4 facility at Area 51 that it can use, as I’ve discussed before (click here).

Many believe Project Bluebeam to be an aborted plan since the Deep State lacked the means to pull it off back in the 1980s and 1990s, and so many had learned about it thanks to Monast and others. However, I will show that all the specific factors needed to move forward with Project Blue beam exist today! I will show five major categories of support that makes this false flag event feasible for the very first time.

If a false flag alien event is attempted in the months ahead, will it succeed? I will address this critical question in the webinar. Prospects of success or failure, however, are unlikely to stop the Deep State from moving forward with the plan. That’s because the goal may not be so much success, but to sow chaos and confusion to sabotage the Earth Alliance and the Galactic Federation of Worlds which are winning the power struggle with the Deep State and its Antarctic German, Draconian Empire and Orion Alliance allies. I’ve recently written a series of articles describing these developments which you can read about here and here.

Let me point out that current events hold many historical parallels with the final months of World War II. Back then, even when the outcome of the war was clear, the Nazis nevertheless fought on. Why? Strategic positioning. They were readying themselves for the covert struggle that lay ahead in the post-war restructuring that would be dominated by the victorious United Nations. The Nazis played all their cards in delaying the inevitable. The Deep State is similarly facing impending defeat, but nevertheless, has some last powerful cards to play—the alien false flag event being its final card—if Von Braun and journalist Serge Monast nailed it.

To learn more, join me this Sunday for what I promise will be an exciting webinar. I’m very much looking forward to presenting all my data and hearing from you in the following Q and A.