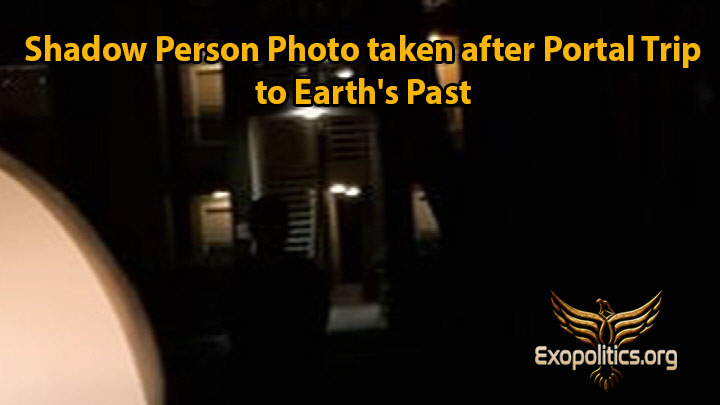 Shadow Person Photo taken after Portal Trip to Earth’s Past

[11/24/2017 – update below] On November 18, JP, a source who has been supplying me with photos of classified antigravity craft in the vicinity of MacDill Air Force Base, Florida, contacted me with an incredible story about being led to and stepping through an invisible portal into the Earth’s past. Then he really caught my attention by producing one piece of noteworthy evidence to support his exceptional encounter.

After exiting the portal, JP says that he took a photo of a strange shadow like person who immediately began following him, which is reproduced below. It clearly shows an entity of some kind. While the photo of the shadow person does not prove JP’s portal travel experience, it is powerful corroborating evidence.

Here’s the full story of JP wrote happened to him when he was walking his dog in the Tampa area of Florida on Saturday.

A person dressed in white came up to me while I was walking my dog. He told me to follow him Into a tree. I can’t believe [it], they use trees as portals. The bark of the tree turned into a watery substance. Once I went through my camera did not work.

JP included a couple of attempted photos of the portal, but they were completely washed out, and revealed nothing, as the following photo shows. When inside the portal, his camera/phone simply didn’t work at all. JP’s hand in front of the alleged tree portal.

He took me to a place with beautiful vegetation. Beautiful place a lot of kids playing, talking a different language. A lot of huge trees, massive, massive trees. Eiffel tower size. I literally felt like an ant. The guy told me this was on Earth couple millions of years ago

He showed me a central tower that changes colors. Beautiful pink and yellow flying birds. My dog also went with me, [he] was totally confused.

But like he understood everything we were saying. Everything communicates as one.

JP gave more details about the telepathic communication network and the technology in use by the beings:

Kids playing on a white sand substance. There was a vehicle that I saw it looked like a car but did not have wheels. A couple flying ships, traditional UFO. I can hear everybody talking like my mind was connected to everybody’s mind.  Hard to concentrate when a lot of voices in your head.  I guess there is a technique to concentrate on one person.

JP went on to next refer to the man in white who had led him through the tree portal. This person shared some information with JP once inside:

He told me that I’ve been there, many times. That I used to  work there. I ask him doing what?

But me personally I don’t remember. I probably got wiped.

What JP was told here was that he had been coopted into a covert military program, but he had no memory of having visited that particular location before. When I asked JP about the military component behind visits to these kinds of temporal/dimensional locations through different portals, he answered:

They hire different agencies to help them.  There is thousands of these places around Earth, that the military helps construct an exchange of passage only, and culture knowledge and history.  Never technology…  Of course, while working there they see the technology and use their technology.

This is consistent with the information that JP has been sharing with me since 2008 when he first discussed his contact experiences in Brazil with a human looking extraterrestrial race. He was subsequently asked to participate in a number of covert technology development programs near MacDill Air Force base that used the information given to him by the extraterrestrials.

When JP declined further participation in the technology development projects, it appears he was then used as an asset in a covert military exchange program with extraterrestrial groups, and different temporal/dimensional beings.

Many of the experiences he subsequently had involved him being coopted into some kind of military exchange program with extraterrestrial races, and with beings in different temporal/dimensional locations.  He said:

That explains why a lot of people are [memory] wiped. Because the military is sending these people to work for these underground civilization for construction for exchange of the history and knowledge of their culture, and also protection by these military personnel.

As to who these beings inside the portals might need protection from, this is where JP’s return gives some insight:

Once I came back a shadow figure was following me.

When I asked JP how he was able to take a photo, he answered that he did it by quickly taking a selfie with his camera/phone:

I sense somebody following me but every time I look back I did not see nothing. So when I felt that sensation, I took my phone, my phone had flash all ready … I did it really fast, and he was there. When I turned around he disappeared.

JP also commented about the shadow person’s features in the photo:

It’s weird because the Flash did not get him, only got his eyes. So he was like … a shadow.

The photo shows a building behind JP and the shadow person between him and the building. Even though JP’s camera’s flash went off, the shadow person did not reflect any light, except from the eyes. The following video shows a zoom of the photo taken by JP.

Below is the original photo taken by JP with his face blurred and a close up of the shadow person. The role of shadow people has been investigated by researchers such as Heidi Hollis who wrote a book about them, titled The Secret War: A True Story About A Real Alien War and Shadow People, where she describes them as having a dark agenda aligned with a negative extraterrestrial group.

Similarly, a recent secret space program witness, Michael Gerloff, spoke about shadow people who tried to frighten him during his youth.

The photo of the shadow person is powerful corroboration for the incredible portal experience JP claims to have had. It complements a series of other photos he has taken showing triangle, rectangle and cigar shaped antigravity craft flying in the vicinity of MacDill Air Force base. JP claims to have been taken into these craft to special locations where he has been monitored in his interactions with technology, people and the environment.

The shadow person photo joins a growing body of evidence supporting JP’s claims that he continues to be used as an asset in a number of covert programs, including a possible cultural exchange program via portal technology with a human society that reportedly lived two million years ago.

[Update 11/24/17 – Mystery of Shadow Person Solved – JP sent me an enhanced version of the photo taken of the shadow person. It was created using the enhance feature in Photoshop Express by one of JP’s friends. I tried enhancing the original photo myself and got a similar result. It shows someone in a military uniform with a sidearm.

JP says that when he turned to face the person, he was not there suggesting some kind of cloaking technology was used. He said he did not take any further photos since he was scared and took off.

JP further added that the uniform is similar to those worn by military personnel he encountered when he was taken up into the rectangle craft operated by US Air Force Special Operations.

This suggests that the person monitoring JP after he emerged from the alleged tree portal was not a shadow person, but a military serviceman using cloaking technology. This reminds me of Arthur C. Clark’s dictum: “Any sufficiently advanced technology is indistinguishable from magic.”

The identification of a military serviceman nevertheless corroborates JP’s claims of being under close surveillance generally, and while having his portal encounter in particular.

Many Thanks to JP and his friend for resolving the mystery behind the Shadow Person.]