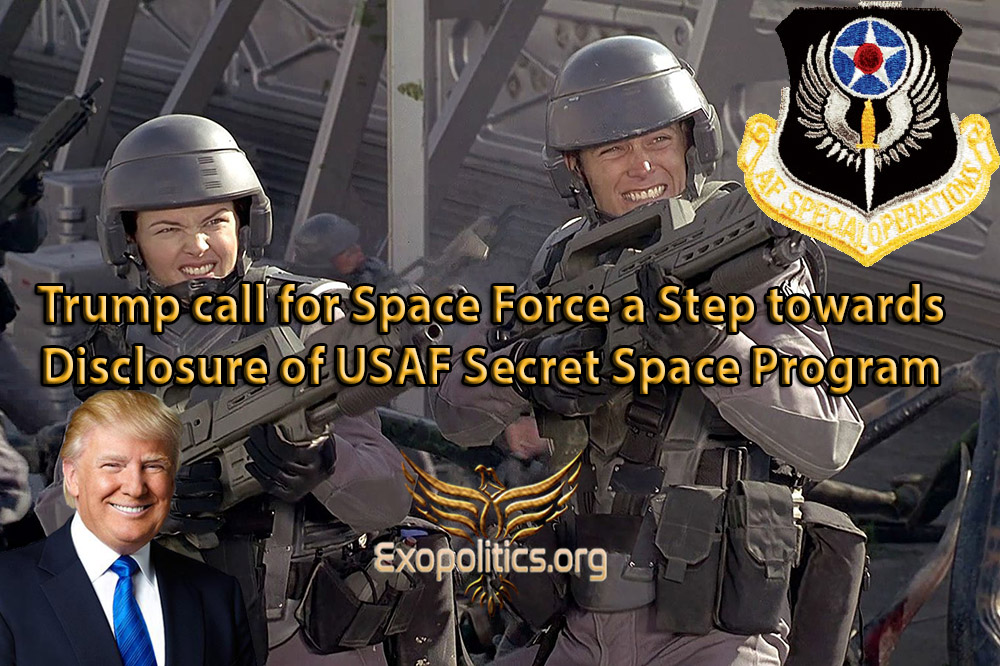 On March 13, President Donald Trump gave a speech where he said the creation of a U.S. space force was a good idea. This gave new life to a recently defeated Congressional bill to create a space force out of the United States Air Force (USAF) despite strong Pentagon opposition. Why has the Pentagon and the USAF been so firmly opposed to the creation of a separate space force?

The conventional explanation is that it would add an unnecessary and expensive layer of bureaucracy at a time when the Pentagon and USAF budgets are stretched thin to meet global military needs. The real reason, however, is one that takes us a big step closer to disclosure of a USAF run secret space program.

Here is what Trump had to say about the creation of a space force in a speech at the U.S. Marines Corps Air Station Miramar, in San Diego:

Trump did not appear aware of an attempt by a subcommittee of the House Armed Services Committee to create such a force in the 2018 National Defense Authorization Act. The proposal passed in the House of Representative on July 14, 2017, but failed to get the necessary votes in the Senate due to fierce opposition by the Air Force and the Pentagon. Even the White House was opposed saying: “the creation of a separate Space Corps, however, is premature at this time.”

According to House members proposing the creation of the space force, the USAF has been negligent in its responsibilities for “short-changing space programs.”

What the House members did not realize is that the USAF already has established a highly capable space force that has been operating secretly for at least two decades.

One might assume that such a space force would be located within the Air Force’s Space Command, which is  among the USAF’s ten major commands. USAF Space Command has as its primary mission the “development and operation of military space and cyberspace technologies”.

However, while Space Command provides the advanced technologies for space operations, it is from another of the Air Force’s ten major commands that personnel for a secret space force is trained and deployed.

According to eyewitness testimonies it is Air Force Special Operations Command (AFSOC) that provides personnel for a USAF run secret space program. Before examining these testimonies, it’s worth pointing out that AFSOC has been active since May 22, 1990. It is headed by a three star USAF General (currently Lt. Gen. Marshall B. Webb) and its headquarters is Hurlburt Field, Florida. Currently almost 16,000 airmen are deployed with AFSOC, their nickname is “Air Commandos” and their motto is “Any place. Any time. Anywhere”.

In short, Air Force Special Operations provides the trained combat personnel for special operations using advanced aerospace technologies and infrastructure developed by the USAF generally, and Space Command in particular. This is analogous to how the US Navy provides the ships and technologies, which deploy Marines as a specialized combat force anywhere around the world. USSOCOM is headed by a Four Star General or Admiral, and integrates special operations forces from all four U.S. military services: US Army, US Navy, USMC and USAF.

It is the only one of the Pentagon’s unified combatant commands that was legislated into existence by the U.S. Congress. The National Defense Authorization Act of 1987 led to the Pentagon establishing USSOCOM on April 16, 1987.

What all this means is that while USAF Space Command provides the necessary aerospace technology and information for AF Special Operations personnel to pilot space fighters, other military services provide their own special operations forces that augment and serve alongside the Air Force’s space commandos.

In the months of September and October 2017, an anonymous whistleblower JP I have known since 2008, took photos of both triangle and rectangle shaped antigravity craft flying in the vicinity of MacDill Air Force base. JP says that on several occasions he was prompted by covert personnel to look up into the sky to take the photos, but warned against taking video of the craft he witnessed. Later he was able to confirm that the patch belonged to Air Force Special Operations Command. In a skype communication on March 14, he said that the patch was located in a similar place as on the airman in this photo. Corey Goode, who says he served for 20 years in a navy run secret space program called Solar Warden, also asserts that he was abducted by airmen belonging to a USAF run secret space program. He says that in early 2016 he was taken on board a triangle shaped antigravity craft by two airmen, where they and their superior interrogated Goode about his knowledge of their highly classified program.

Goode has provided artistic sketches of the triangle shaped spacecraft that was used to abduct him on several occasions. On March 14, in response to a skype question, he says that he witnessed a variation of the Special Operations Command patch during his interactions with AF personnel in space. Based on the testimony and photos provided by JP, and Goode’s testimony and artistic depictions, it can be concluded that the USAF does operate a secret space program, and it uses personnel from Air Force Special Operations Command to operate space craft developed, supplied and monitored by Air Force Space Command.

All this takes us back to Trump’s speech that the creation of a space force is a good idea. There are three possible explanations which need to be considered for why he did so.

First, Trump has been officially briefed that such a force already exists, and his proposal is part of an official disclosure process for revealing the existence of the USAF run secret space program. A powerful motivation for doing so may be to gain public support and additional funding for the program.

Second, Trump has not been officially briefed about the existence of such a space force but has acquired knowledge of it through unofficial channels. Goode claims that he has been told through his own sources that Trump has indeed been informally told about multiple secret space programs.

Trump’s speech was therefore intended to pressure Air Force officials to officially brief him about the existence of its space force, in order to prevent the creation of a duplicate space program authorized by Congress, which would take funding away from existing USAF programs. This explanation effectively lays the foundation for the Air Force secret space program being publicly revealed via Trump after he is officially briefed about its existence.

Third, Trump has neither official nor unofficial knowledge of a secret space force and simply believes that the creation of such a force is a good idea worth pursuing. This explanation appears least likely of the three given what he said in his inaugural speech on January 20, 2017, which indicated he had already received some information about secret space programs: Consequently, there is grounds for optimism that President Trump’s speech will result in him eventually disclosing the existence of an Air Force run space force in order to gain public support for its expansion and additional funding.