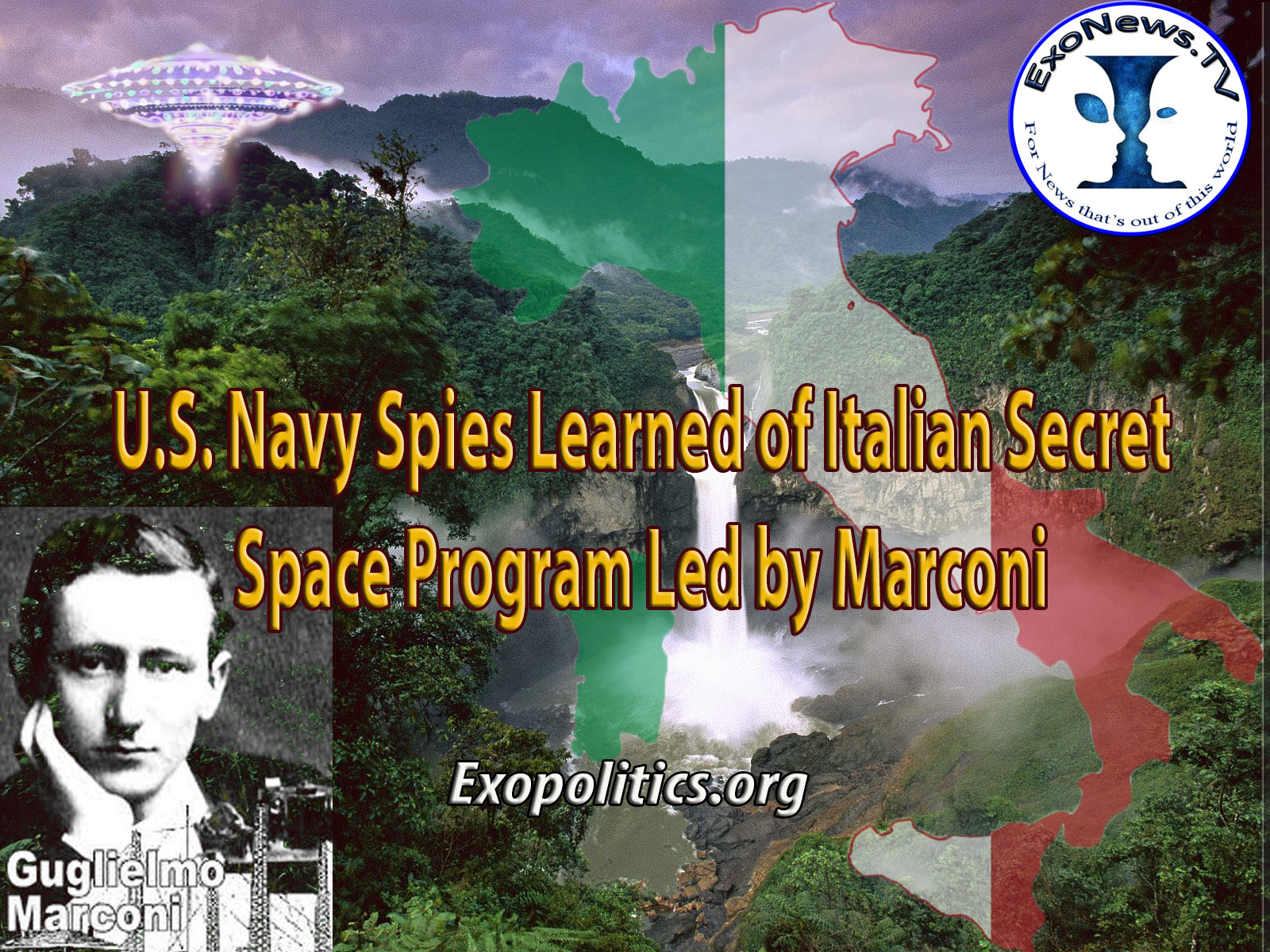 A former U.S. Naval Intelligence operative, William Tompkins, shared his knowledge about the existence of an Italian secret space program in today’s episode of ExoNews TV. He claims that U.S. Navy spies embedded in Nazi Germany’s top aerospace industries had learned about this Italian program, and briefed a covert Naval Intelligence group, including Tompkins, who was stationed at Naval Air Station, San Diego from 1942 to 1946.

According to documents released in the late 1990’s, Benito Mussolini came into the possession of a UFO on June 13, 1933, which had an unknown flying saucer design and origin. After extensive analysis, Italian researchers concluded the documents were authentic and confirmed the first UFO crash retrieval in recorded history – 14 years prior to the famed July 1947 Roswell Crash.

One of the key Italian researchers involved in studying the Fascist documents is Alfredo Lissini. Here is his description of the 1933 crash:

June 13, 1933. A circular craft resembling a pair of saucers joined at their outer rims crashes near the town of Maderno, in Lombardy, northern Italy. The object, made of thin, silvery-grey metal, is about fifty feet in diameter and less than seven feet thick…. No occupants in the object were found. Lissioni went on to describe the top secret organization created to study the retrieved UFO as stated by the documents:

Il Duce created.  RS/33 Cabinet (“Research-Espionage/1933”), it is headquartered at Rome’s prestigious La Spezia University, the first MJ 12 set up to study the crashed UFO situation in Italy it was headed by Marconi.

In today’s ExoNews TV interview, Tompkins [WT] discussed the Italian secret space program in response to a series of questions where I [MS] asked him about Italy’s involvement in Nazi Germany’s own program in developing antigravity technologies:

[MS] Were Mussolini’s engineers and scientists helping the Nazis develop these technologies?

[WT] Well there was actually a completely separate program from Hitler… There was one group who were tied with [Maria Orsic]..   It [the Italian space program] was like a third … The SS was doing it, she [Orsic] started it and she’s still doing it, and then in Italy there was a massive one going. It was major …

Regarding who headed the Italian space program, Tompkins confirmed that it was indeed Marconi, as stated in the Fascist flying saucer documents:

[WT]  As the individual, yes. There was a lot more Italian stuff in companies that were different people involved, like subcontractor type stuff. They had breakthroughs in different areas. Brilliant people, but that was separate from Mussolini, completely. Two different worlds… Guglielmo Marconi along with Nikola Tesla invented wireless radio transmitters. Both believed they had established radio communications with extraterrestrials.

This was similar to the situation in Germany where the Nazi SS and German Secret Societies had built parallel space programs. The German secret societies had largely relocated their program to Antarctica, and kept it separate to the space program being developed by the Nazi SS, primarily for the war effort.

In the book, Insiders Reveal Secret Space Programs, the cooperation between the Nazi SS and Mussolini’s Fascist government in developing flying saucers for the World War II effort was examined. However, what Tompkins revealed is that both the Germans and Italians had separate advanced aerospace programs run by secret societies in parallel to these official efforts.

Tompkins claims here correspond closely with those of Corey Goode, who says he came across this information in smart glass pads during his covert service with a secret space program from 1987 to 2007. Goode said that the German Secret Societies denied the Nazi SS the most advanced technologies, which could have been used to win the war. It’s therefore likely that Marconi’s “massive” secret space program, according to Tompkins, similarly denied advanced technologies to the Italian Fascist government.

There have long been rumors of a civilian effort to build flying saucers in South America led by Marconi, whose death in 1937 was allegedly faked. According to independent archeology researcher, David Hatcher Childress, Marconi’s death was a cover for him moving to Venezuela to start a futuristic project away from the looming European war:

Ninety-eight scientists were said to have gone to South America where they built a city in an extinct volcanic crater in the southern jungles of Venezuela. In their secret city, financed by the great wealth they had created during their lives, they continued Marconi’s work on solar energy, cosmic energy, and anti-gravity. Working secretly and apart from the world’s nations, they built free-energy motors and ultimately discoid aircraft with a form of gyroscopic anti-gravity.

Without confirming such rumors, Tompkins did give them plausibility in his response to another of question:

[MS] Marconi’s Italian studies, was that in any way associated with South America? There were rumors that Marconi went to South America to continue work on the Italian flying saucer program.

[WT]  – I heard that, but I don’t know it for sure. But I heard that, yes. There were a lot of underground facilities in South America too.

In addition to his startling revelations about a secret Italian Space Program in his interview released today on ExoNews TV, Tompkins provided further details about the secret Antarctica bases set up by Nazi Germany. The bases used slave labor recruited from a number of Nordic countries to solve their labor shortage as he explained.

[MS] Do you know how the Nazis solved their work force, labor force problem in Antarctica? In the book you mention that they took seven million people over there. Were these, kind of like, slave labor?

[Salla] Do you know if they were predominantly from one [ethnic group], there were a lot of missing people in Europe, were they Jews, highly educated …

[WT]  They wouldn’t take any Jews I guarantee you, but yes they were bringing people from all over. Many of the Nordic countries, Denmark, Sweden, Norway, that group. That was [genetically] real close to the Germans.

Tompkins recollections of what he heard at the debriefings of U.S. Navy spies during his covert service out of Naval Air Station, San Diego, from 1942 to 1946, are startling. His testimony is supported by documents he has released that confirm that he was stationed at the Naval Air Station during World War II, along with mission orders to disseminate advanced aviation technologies to select U.S. think tanks, corporations and universities.

The conclusion that emerges from Tompkins latest revelations is very significant. Not only did the two major Axis powers develop highly advanced flying saucer craft based on revolutionary antigravity technologies, according to Navy spies, but the civilian-led components of these programs were able to relocate their most advanced programs to remote locations, and thereby escape the fate of the doomed Nazi and Fascist governments in Europe during WWII.