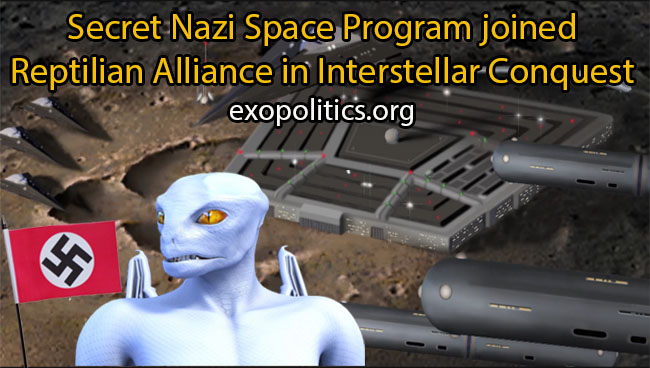 The most highly classified space program currently in existence emerged out of a secret alliance between Nazi Germany and Reptilian extraterrestrials, according to whistleblower Corey Goode. In his most recent interview on Cosmic Disclosure, Goode explained the origins of the “Dark Fleet” as the secret space program established by German Secret Societies and the Nazi SS in Antarctica during the Second World War era.

During his interview, Goode described how the Dark Fleet is currently comprised entirely of humans drawn from all over the world who have a totalitarian ideology initially inspired by Nazi ideals:

They looked very stern, very arrogant, like they felt very elite. They wore black stormtrooper kind of clothes, just very stern like. Very totalitarian acting. And a lot of the people that ended up going into this program came from a lot of the German secret society Nazi kind of programs.

And all we’ve really known about them is that they fight . . . They’re an offensive force. They are for going and doing offensive type of work alongside the Draco. They go outside the solar system on, I guess, conquests or defending Draco territory, helping the Draco on military expeditions.

Goode also discussed a secret base established on the Moon by the Dark Fleet, which has a trapezoid shape, and was previously described by Carolyn Hamlet in an interview where she described physically entering this base. Hamlet recalls being inside a spacecraft approaching the moon base which she witnessed. She says that she next recalled being inside the moon base and witnessed a council type meeting with up to 30 global leaders from around the world led by a prominent female. Another whistleblower, former USAF radar tracking operator, Niara Isley, says that in 1980 she was taken between eight and ten times to a secret moon base, which used human workers and was guarded by Reptilian beings:

In interviews, people always want to know what my moon experiences were like and I can certainly understand such avid curiosity. I can only state that it was terrible on multiple levels. I was terrified for my life the whole time. I was very poorly fed and worked hard during the day cycle, operating some kind of electronic equipment for excavation at times, and doing hard physical manual labor at others, such as lifting and stacking boxes. Worst of all, I was used for sex during what passed for night there, from man to man. I was allowed very little sleep, and I’ve since learned that this is another facet of mind control abuse. I shut down during all of this to the point that I didn’t even feel alive anymore. (Facing the Shadow, Embracing the Light, p.271)

This was very likely the Dark Fleet base that Goode and Hamlet later described.

A number of the advanced space vehicles possessed by the Dark Fleet were detailed by Goode including some that appear very similar to the imperial star cruisers in the Star Wars series. Other ships were cited as diamond shaped or pumpkin seed shaped. All these craft possess powerful offensive weapons systems, which had been developed by another secret space program called the Interplanetary Corporate Conglomerate, with some enhanced further by the Draconian Reptilians, as Goode explains:

This [Draco] group is working alongside a human group that has all of this technology that has been enhanced by . . . the ICC has helped them build out a lot of this – these vessels and weaponry. And then the Draco group has helped them enhance it even more so for offensive duties outside of the solar system. And they spend almost all of their time completely outside the solar system.

Goode says up until recently, the Dark Fleet possessed a decisive technological advantage over all the other space programs, especially the Solar Warden program, which had been established by the U.S. Navy in the 1980’s.

Over much of the time of his secret space program service, Goode said all five secret space programs, described at length in Insiders Reveal Secret Space Programs, cooperated extensively. This is no longer the case with the Solar Warden program, along with defectors from the Dark Fleet, Interplanetary Corporate Conglomerate and other smaller groups, which now coordinate with each other as the Secret Space Program Alliance.

In previous episodes, Goode has described secret negotiations aimed at bringing about a cessation of military hostilities between the secret space programs, and introducing “full disclosure” to the world.

In the April 12 Cosmic Disclosure interview, Goode discussed his meeting with a White Royal Draco, the Draconian Reptilian leader, which took place in April 2015. This meeting with the 14 foot tall alien was very intimidating, according to Goode, as illustrated in the following image. The White Royal Draco possessed highly developed psychic abilities, which Goode found to be very invasive during their telepathic communications:

When it was interfacing with me, its eyes were morphing the whole time. It was a very psychically powerful being. And it penetrated the frontal lobe. It was almost like there were microwaves or something shooting into the front of your frontal lobe. It was very invasive. And both Gonzales [pseudonym used by Goode’s liaison with the Secret Space Program Alliance] and I, for several days, at least three days, we had headaches. We were nauseated.

Goode’s information has been corroborated recently by the remarkable testimony of William Tompkins, a serviceman who was assigned to a covert U.S. Navy program that involved spies embedded in Nazi Germany reporting back the developments within the Nazi’s top secret aerospace projects. Tompkins has supplied critical documents in his book, Selected by Extraterrestrials, that support his claims.

In recent interviews on ExoNews TV, Tompkins confirmed that an agreement had indeed been reached between Adolph Hitler and Reptilian extraterrestrials. Tompkins was present when the Navy spies described learning about Reptilian consultants that helped German scientists develop sophisticated weapons and antigravity propulsion systems. Hitler, therefore, very likely participated in a similar meeting with a Royal White Draco as Goode experienced in 2015.

In fact, there is evidence that such a meeting did take place. Hermann Rauschning, the Governor of Danzig, revealed that Hitler had met a mysterious leader who was the “superman” destined to rule the world. Hitler allegedly said:

What will the social order of the future be like? Comrade I will tell you. There will be a class of overlords, after them the rank and file of the party members in hierarchical order, and then the great mass of anonymous followers, servants and workers in perpetuity, and beneath them again all the conquered foreign races, the modern slaves. And over and above all these, will reign a new and exalted nobility of whom I cannot speak … but of all these plans the militant members will know nothing. The new man is living amongst us now! He is here. Isn’t that enough for you? I will tell you a secret. I have seen the new man. He is intrepid and cruel. I was afraid of him.

Hitler’s meeting with the “superman” or ‘secret world leader’, if true, echoes Goode and Gonzales’ encounter with the Royal White Draco whose psychic abilities were very invasive and capable of inducing terror.

Significantly, Hitler’s description outlines the hierarchical nature of the New World Order he was seeking to create with Germany’s secret space programs, which were ultimately under the leadership of this mysterious “superman” who was almost certainly the same Royal White Draco described by Goode. The Reptilians’ leader, the Royal White Draco, was therefore at the apex of power, ultimately controlling the Dark Fleet being built by the Nazis, and the fleet’s current interstellar imperial operations.

Tompkins also reported that the Nazis had established secret bases in Antarctica as a result of their alliance with Reptilian extraterrestrials, confirming Goode again. Out of these Antarctic bases, the Nazi secret space program was launched, and later established a presence elsewhere in our solar system, and beyond.

Importantly, Tompkins states that the Nazi bases were built under the protection of, and adjacent to larger caverns of, Reptilians, which all but confirm that a White Royal Draco was in ultimate control of the Nazis secret space program. Tompkins’ information is, therefore, consistent with the emergence of the Dark Fleet, as described by Goode.

In conclusion, Goode’s revelations about the Dark Fleet in his April 12 Cosmic Disclosure interview are extremely significant. They reveal that elements of humanity have joined in galactic wide wars of conquest, unbeknownst to the rest of the planet’s population. For decades, Earth has provided personnel, technology and resources for unjust wars in space because proponents of a Nazi inspired ideology, in league with an imperial extraterrestrial race, continue to cast a dark shadow over global leaders. This iniquitous situation needs to come to a quick end; Goode and Tompkin’s disclosures are an important first step in achieving this vital goal.