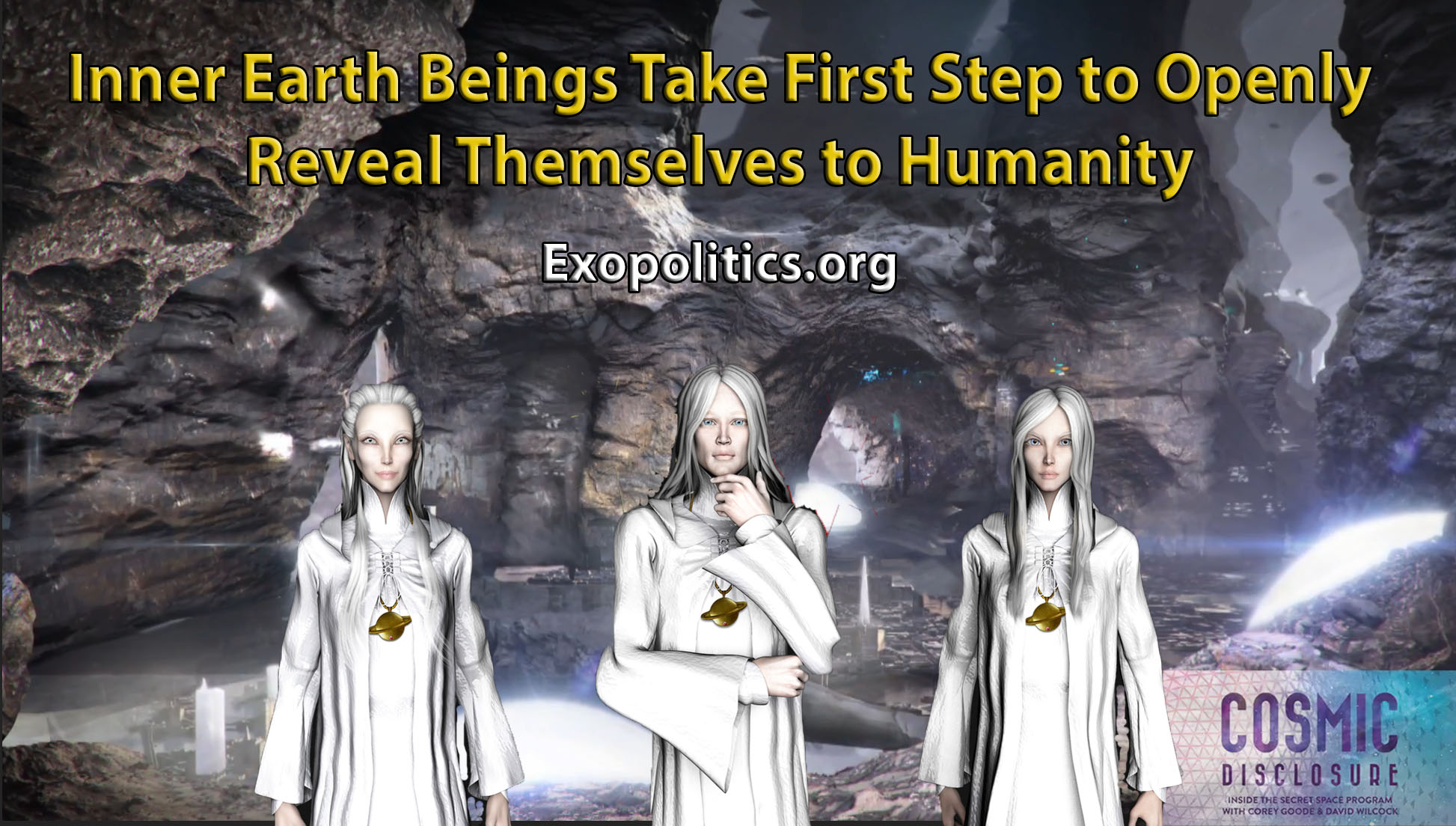 Several ancient civilizations hidden in the subterranean regions of Earth have taken the first steps towards revealing themselves to surface humanity, according to secret space program whistleblower, Corey Goode. In the April 26 episode of Cosmic Disclosure, Goode provided more detailed information about an encounter with Inner Earth civilizations, which he initially described in a January 14 update on his website.

Goode began by citing his early January 2016 visit to a futuristic underground city belonging to an Inner Earth civilization, and for the first time he identified them as the “Anshar,” who have existed a staggering 18 million years. Goode said he could feel the excitement among the city’s inhabitants over the news that their leaders had decided to change an established policy of strict separation, and make preparations to openly reveal themselves to surface humanity. The changed policy, Goode stated, emerged out of a December 2015 meeting held at a secret base in the Kuiper Asteroid Belt, where representatives of an alliance of seven Inner Earth civilizations met with a representative of the Sphere Being Alliance.

On previous occasions, Goode has described the Sphere Being Alliance as sixth to ninth density beings – Type III civilizations according to the Kardashev scale – which have transformed relations between different secret space programs and extraterrestrial civilizations operating in our and adjacent solar systems.

In addition to creating a “frequency fence” or quarantine around the Solar System, the Sphere Being Alliance has helped a more ethically principled “Secret Space Program Alliance” achieve technological parity with less ethical space programs and extraterrestrial groups.

All the Inner Earth civilizations revere the Sphere Being Alliance as a very ancient race, described as “the Builders,” who were responsible for creating the first civilizations on Earth and elsewhere in our Solar System. Goode has also previously described Ancient Builder technologies as being dispersed all over the Earth and the solar system. These mysterious technologies are highly sought after by different extraterrestrial groups.

Therefore, Goode was present at the Kuiper Belt meeting to witness the Sphere Being Alliance representative, a 10 foot tall triangle headed being, telepathically chastise the Inner Earth civilizations who in the former’s opinion had “not been proper stewards” of the planet. Goode provided a graphic of the encounter which shows the meeting as it occurred at the secret Kuiper Belt base. The Inner Earth beings were confused and anxious over what they had been told, according to Goode. He speculated that the Inner Earth representatives had been informed that their long time policy of deceiving surface humanity about their existence, and maintaining a strict policy of separation had not been appropriate to their role as planetary custodians.

Apparently, this led to great concern over the merits of revealing themselves to surface humanity, who are considered dangerous and unpredictable. This consequently led to a split among the seven civilizations, who had briefly formed an Inner Earth Alliance as Goode described in his September 23, 2015 report.

Three of the civilizations subsequently decided to break away from the Alliance and maintain their separation policy. They would do so by stepping up their counter-intelligence (deception) operations with surface humans in order to remain hidden.

The other four civilizations in turn decided to follow the advice of the Sphere Being Alliance and take active steps to start revealing themselves to humanity.

One of the first resulting steps taken was to stop falsely telling human ‘channelers’, who they had established telepathic communications with, that they were extraterrestrials. The new policy meant revealing that they were actually humans from the Earth’s interior.

Coincidentally, on January 17, 2016, three days after Goode’s initial report on his Inner Earth visit, a popular channeler of the “Galactic Federation” and “Ashtar Command”, Greg Giles, released an update on having been deceived about channeling extraterrestrials as he first believed. Instead, he says he had discovered that he was being fooled by a military group using “Voice of God” technology.

The so-called ‘channeled messages’ I received claiming to be from my soul family from the stars were in fact simple radio waves sent by U.S. government agents, allegedly from the military industrial complex, working in concert with volunteers, many of which are secret society members who help propagate enormous numbers of hoaxed news stories of UFOs and related space news, building a backdrop for a PSYOPS program that lures science and spirituality-minded individuals such as myself into their web. [see update below]

While Giles’ discovery that his telepathic contacts were not who they claimed to be preceded the January Kuiper Belt meeting, it nevertheless illustrates the ramifications of the kind of deception previously conducted by the seven Inner Earth Civilizations. Presumably, this would change in the future, at least for some of these civilizations, in how they respectively conduct themselves with surface humanity.

It’s worth pointing out that there have been a number of individuals who have claimed to have physically met with or been in telepathic communications with Inner Earth civilizations. These include well known South American contactees such as Ricardo Gonzales and Luis Fernando Mostajo, who I have personally met and communicated with for nearly a decade now.

I have attended some of their seminars and have concluded that they are both very credible, and indeed in contact with representatives of both extraterrestrial and Inner Earth beings as they claim.

In addition, there are channelers such as Dianne Robbins who claims to have met with and telepathically communicated with Inner Earth beings such as Adama from Telos.

Goode believes that direct contact between surface humanity and Inner Earth beings is likely to occur before extraterrestrial races start to openly make contact. This appears to be a very logical way to proceed.

In my book, Insiders Reveal Secret Space Programs and Extraterrestrials, I have provided extensive documentation, supporting whistleblower testimonies, and circumstantial evidence that leads to the conclusion that Goode is being truthful in his ground breaking disclosures. Click above image for articles and interviews featuring William Tompkins

More recently, Goode’s revelations have been confirmed by a former Navy Intelligence operative during World War II, and four decade veteran of the aerospace industry, William Tompkins. Consequently, I have no reason to doubt the accuracy of Goode’s latest revelations about meetings with representatives of Inner Earth civilizations, and the new policies that have been implemented in accord with recent developments.

It is entirely understandable that there is considerable trepidation by some of the Inner Earth groups over the dangerous and warlike policies of national elites running affairs on the surface of our planet. Thankfully, as the internet facilitates the rest of humanity awakening to the truth about secret space programs and extraterrestrial life, we will be better able to make national and global elites accountable for their policies.

Most importantly, it is unlikely that aggressive policies at a national or global level will be permitted once the rest of humanity learns the truth about the extent of deception that has been perpetrated upon it. We can, therefore, have great confidence that as Inner Earth civilizations reveal themselves, they will be warmly greeted by the vast majority of humanity and not subjected to war-like policies by unrestrained national elites.

[Update 4/27/16 – Greg Giles 1/17/2016 statement cited above, was preceded by earlier messages dating back to 2012 where he first publicly acknowledged that his channeling had been compromised. Consequently, his January message was an update and not new information for those that had earlier followed his channeling. The above article has been revised accordingly]