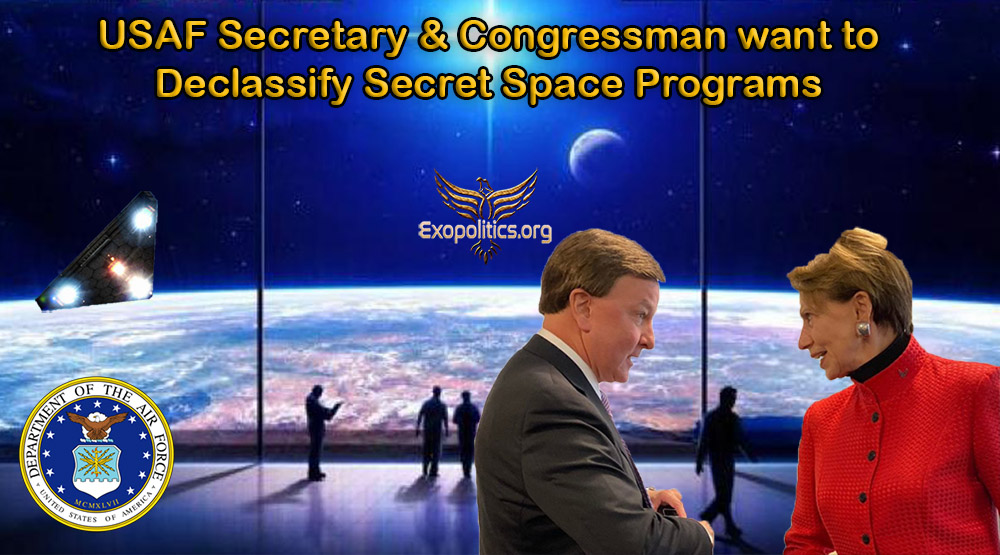 On December 7, attendees at the Reagan National Defense Forum held at the Reagan Presidential Library were told by the Secretary of the Air Force, Barbara Barrett, and US Congressman Mike Rogers, that they are in favor of declassifying information about the Air Force’s secret space program in order to get the public to support a US Space Force. Their comments confirm that the US Air Force is on the verge of disclosing the truth behind rumors of a secret space program and that the Space Force is a vital part of a series of stunning disclosures that lie ahead.

Barrett and Rogers’ comments were published by Defense News in an article by reporter Nathan Strout with the eye-catching title, “Barrett, Rogers consider declassifying secretive space programs”. Barrett and Rogers were speaking at a panel on “Next Steps in Space: Launching America’s Sixth Military Branch”. In the panel Barrett said:

Rogers, a co-sponsor of the original House of Representatives Bill to create a Space Force/Corps, agreed and said that information about space programs was “overwhelmingly classified”.

Rogers elaborated further on the need to declassify the Air Force’s secret infrastructure in space in order to win public support for Space Force:

As members of the Armed Services Committee and the defense appropriators, we get it. But we have to have our other colleagues in the Congress to be supportive of us making the changes we need and the resources we need into this… It’s not going to happen until they understand the threat and the dependence we have. And I don’t think that can happen until we see significant declassification of what we’re doing in space and what China and Russia are doing, and how space is in their day-to-day lives.

Rogers’ comment that the US, China and Russia have secret space programs, and that the public needs to know more about these in order to support the creation of Space Force is stunning acknowledgment of the existence of rival military programs with space technologies far more advanced than the rocket-propelled technologies used by NASA and other national space programs.

This echoes comments by a recently retired USAF Lieutenant General Steven Kwast in a lecture where he described China developing a space navy:

They are building a navy in space with the equivalent of battleships and destroyers that will be able to maneuver and kill and communicate with dominance.

The two declined to say how much of the black space portfolio could move into the public, nor when changes would start happening. But Barrett pledged that it would be a focus for her office moving forward, a sign that progress could come during 2020.

Two days later, it was announced that the Congressional Conference Committee set up to resolve competing Space Force proposals from the House and Senate had reached an agreement.

On Wednesday, December 11, the House of Representatives passed the bipartisan agreement reached for the NDAA/Space Force Act and the Senate is scheduled to vote on it next week. President Donald Trump has already tweeted that he will immediately sign it into law making the creation of Space Force official.

The comments made by Barrett and Rogers about the need to declassify more of the space activities secretly conducted by the USAF followed only one day after the December 6 news of an agreement being reached in Congress for the passage of the Space Force Act. This is not coincidental.

In fact, this sequence of events is stunning confirmation that Space Force is being used as a means for declassifying key elements of a USAF secret space program that possesses advanced propulsion and energy systems that will revolutionize the aerospace industry.

The linkage between the creation of the Space Force and the declassification of advanced space technologies process is precisely what I predicted in the US Air Force Secret Space Program. Put simply, the rollout of Space Force provides the means for disclosing futuristic technologies used by the Air Force in a way the boosts public confidence, setting the stage for even more remarkable disclosures.

The creation of Space Force marks the beginning of an official disclosure process that will confirm the source of many UFO sightings were, in fact, advanced space technologies developed by the USAF, or the aerospace forces of major nations such as Russia and China.

Recently, the US Navy authorized the release of five patents of revolutionary electromagnetic propulsion and energy systems that one of its scientists acknowledged are being actively developed by China. China has a secret space program that is greatly worrying US national security analysts such as Lt. General Kwast, and this is a key factor behind Space Force’s launch.

After Space Force deploys in 2020, the stage will be set for further disclosures about revolutionary aerospace technologies. It can be expected that explanations for the origins of such technologies will be initially said to be talented scientists such as the US Navy’s Dr. Salvator Pais, the inventor of the five Navy patents, and similar breakthroughs by scientists in other national space programs. It will nevertheless be much harder to hide the truth of their real origins.

Many of the technologies used in secret space programs developed by the US, China and Russia have been reverse engineered from artifacts retrieved from the ruins of ancient civilizations and from crashed extraterrestrial vehicles, as a number of insiders have recently claimed. Among these is a former Director of the Defense Intelligence Agency, Vice Admiral Tom Wilson, who learned that a major defense contractor was actively reverse engineering such technology back in 1997.

Eventually, the disclosure of technologically advanced extraterrestrial life will be announced, but only after the creation and deployment of Space Force has reached the point that public confidence is such that the societal collapse predicted in the 1961 Brookings Report would not occur.

The Brookings Report, titled “Proposed Studies on the Implications of Peaceful Space Activities for Human Affairs,” described an alarming scenario of what might happen to society if humanity was not sufficiently prepared for the discovery of technologically advanced extraterrestrial civilizations:

Evidences of its [extraterrestrial] existence might also be found in artifacts left on the moon or other planets. The consequences for attitudes and values are unpredictable, but would vary profoundly in different cultures and between groups within complex societies; a crucial factor would be the nature of the communication between us and the other beings…. Anthropological files contain many examples of societies, sure of their place in the universe, which have disintegrated when they had to associate with previously unfamiliar societies espousing different ideas and different life ways; others that survived such an experience usually did so by paying the price of changes in values and attitudes and behavior.

The major takeaways from the Air Force Secretary promising future disclosures of a classified military space program and the launch of Space Force is that an official disclosure process is now firmly underway. 2020 promises to be an exciting year for all wanting to learn about secret space programs created by the US, China and Russia, and eventually learn the true origins of these technologies.