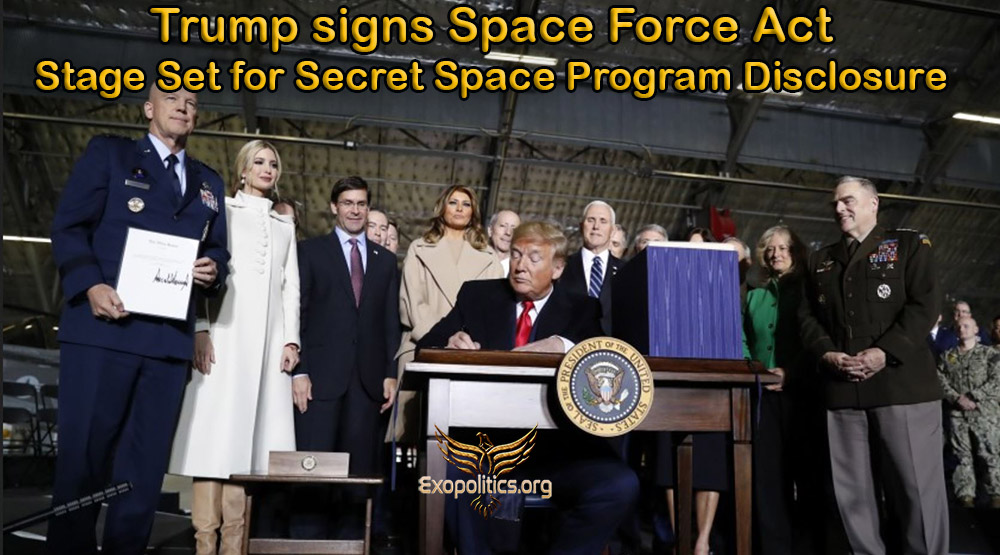 President Donald Trump signed the Space Force Act into law yesterday night. It was included in the omnibus 2020 National Defense Authorization Act (NDAA) funding Pentagon operations for another year, and officially creates a sixth branch of the military – US Space Force (USSF). Trump’s signing sets the stage for some amazing disclosures of what the USAF has secretly deployed in space for decades.

On the surface, there appears to be little to be excited about with the creation of Space Force, which will continue to operate with largely the same personal and commander of the current Air Force Space Command – General John “Jay” Raymond.

Space Force will operate under the authority of the Department of the Air Force as an independent military branch, a temporary compromise, according to President Trump who would like to see the creation of a Department of Space Force eventually.

Critically, General Raymond is also in charge of US Space Command, the Pentagon’s newly created combatant command, which integrates the aerospace resources of the USAF, Army, Navy and USMC in combat operations around the world and outer space.

For the first year of Space Force’s existence, General Raymond will be dual-hatted as Chief of Space Operations and Commander of Space Command. This will allow Space Force to closely coordinate with other branches of the US military that have assets in space.

The big change that lies ahead is what the USAF plans to do with the highly classified space program it has secretly developed and deployed with futuristic aerospace technologies dating back to the 1970s. Lieutenant General Steven Kwast (USAF ret.) recently mentioned some of the cutting edge technologies developed in classified Air Force laboratories in a November 2019 lecture:

The technology is on the engineering benches today. But most Americans and most members of Congress have not had time to really look deeply at what is going on here. But I’ve had the benefit of 33 years of studying and becoming friends with these scientists. This technology can be built today with technology that is not developmental to deliver any human being from any place on planet Earth to any other place in less than an hour.

Less than a week before Trump signed the Space Force Act, the Secretary of the Air Force, Barbara Barrett, and Mike Rogers, one of the Congressman who co-sponsored the original bill for Space Force, both called for the USAF to declassify the advanced space technologies it has developed. Barrett said:

All the assets and personnel that clandestinely operate within the USAF secret space program will be transferred over to Space Force and the authority of General Raymond.

This will be welcomed by the commanders and personnel in the secret space program whose space activities have been classified so highly that it has negatively impacted career advancements and benefits when compared to their peers in more conventional Air Force programs.

The creation of Space Force sets the stage for the official disclosure of major components of the Air Force’s secret space program which I have discussed in detail in the US Air Force Secret Space Program. Disclosure is likely to begin with antigravity vehicles such as the legendary TR-3B, a flying triangle that was first sighted in the late 1980s, and newer rectangle-shaped flying platforms, which were photographed near McDill Air Force base in 2018. There are also disk-shaped flying saucer craft and stealth space stations that were jointly developed with the National Reconnaissance Office. More incredible are the “stargates” or traversable wormholes that have been secretly developed and used for decades according to multiple insiders.

The disclosure of these and other advanced technologies will be mind-boggling and revolutionize the aerospace industry. More importantly, for the Trump administration, they will help re-industrialize America and establish Space Force as the leading military power in space for decades to come.