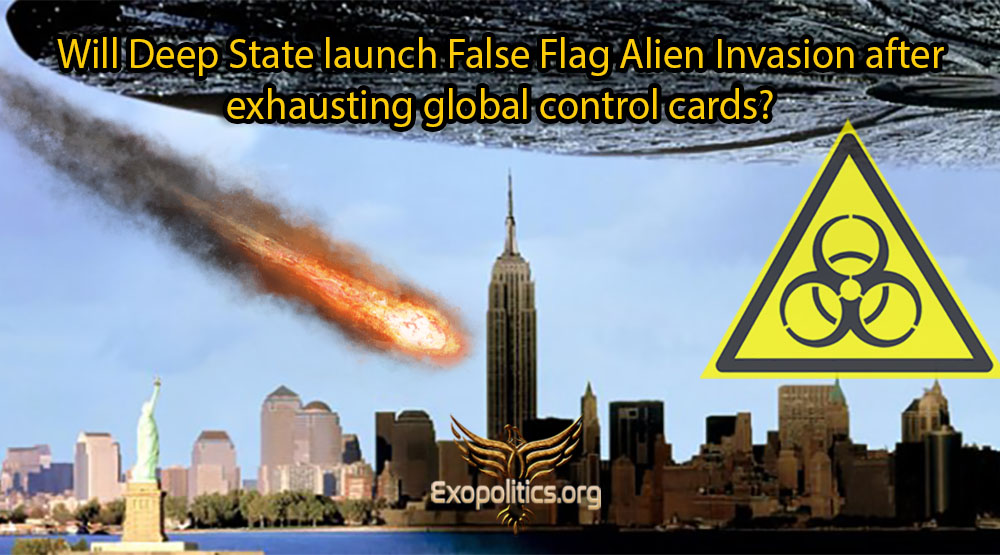 Shortly before his death in 1977, Werner Von Braun, a pioneer in both German and US  rocket programs, warned that a group of global controllers, aka Deep State, would systematically move through a series of false flag events or “cards”, that would be played in a sequence designed to ultimately militarize space and usher in a New World Order.

Von Braun gave his famous warning to Carol Rosin, who, from 1974 to 1977, was a corporate manager at Fairchild Industries, Inc., a major aerospace contractor that Von Braun had joined two years earlier. Rosin says that Von Braun asked her to be his spokesperson after being diagnosed with terminal cancer and revealed an elaborate plan by the US military industrial complex to weaponize space.

In a recorded video interview from December 2000 for the Disclosure Project, Rosin described the following sequence of false flag events Von Braun explained to her:

Then terrorists would be identified, and that was soon to follow. We heard a lot about terrorism.

Then we were going to identify Third World-country ‘crazies.’ We now call them ‘nations of concern.’ But he said that would be the third enemy against whom we would build space-based missiles.

The next enemy was asteroids. Now, at this point, he kind of chuckled the first time he said it. Asteroids — against asteroids we are going to build space-based weapons.

And the funniest one of all was what he called aliens, extraterrestrials. That would be the final scare. And over and over and over during the four years that I knew him and was giving speeches for him, he would bring up the last card. Carol, the last card is the alien card. We are going to have to build space-based weapons against aliens and all of it is a lie.

As to identifying the group orchestrating this series of contrived global events, Rosin was reluctant to give names but said:

The room was filled with people in the revolving door game. There were people that I had seen once in a military uniform and other times in a gray suit and an industry outfit. These people play a revolving door game. They work as consultants, industry people and/or military and intelligence people. They work in the industries and they revolved themselves through these doors and right into government positions.

Rosin’s description of what was taking place in the boardroom of Fairchild Industry is very revealing about the company’s key role within the military industrial complex, and how the Deep State operates by manipulating global events and mainstream media narratives.

Russia, terrorism and rogue nations have collectively dominated decades of news cycles. More recently, we are witnessing an increasing number of stories of killer asteroids just missing the Earth in the mainstream media. The most recent examples are three massive killer asteroids heading towards the Earth and predicted to fly close by on June 6,8, and 20, any of which could cause cataclysmic damage.

Additional “cards” can be found in the Deep State playing deck described by Von Braun back in the 1970s. This includes a global pandemic, which was discussed in the City of London by a high-level group of bureaucrats in 2005 as part of a covert Deep State plan to usher in a New World Order.

Von Braun’s warning alerts us to the threat of an alien invasion being used as the final card in a long sequence of contrived events that would justify the weaponization of space, and the establishment of a New World Order desired by the Deep State.

Now there is a steady stream of news articles pointing to the possibility of an alien invasion in a post-COVID world. The potential for such an event occurring in the run-up to the 2020 election is a distinct possibility given the Deep State’s determination to remove the Trump administration by any means possible.

A paper leaked on October 18, 2016, allegedly by a major Democratic consulting firm, the Benenson Strategy Group, discussed the possibility of a staged alien invasion keeping Trump supporters home and helping the Clinton campaign win the 2016 election.

The paper reviewed some of the advanced holographic technologies that could be used in staging such a false flag event. While the paper’s authenticity remains disputed, it nevertheless showed how the alien invasion card could be used for electoral purposes. Rather than heroically attempting to prevent the militarization of space, was Von Braun a double agent for an Antarctica-based breakaway German Colony wanting to prevent the US military from ever threatening their secret space program?

[Note: Audio version of the above article is available here]