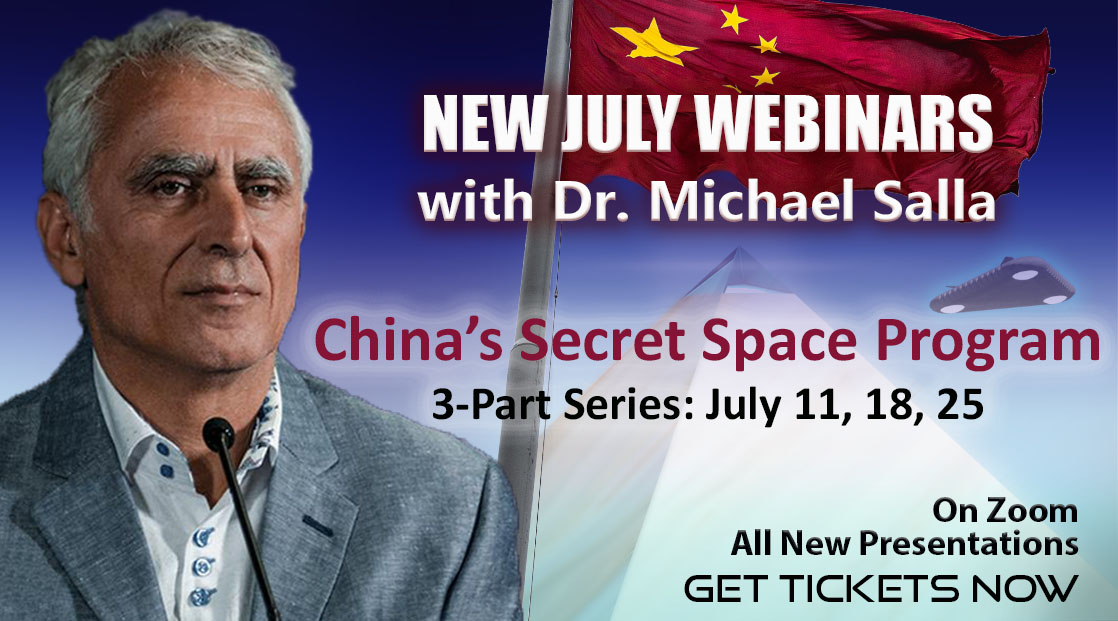 Written by admin on June 4, 2020. Posted in Featured, Space Programs

– All on Zoom with Brand New Presentations!
– Enroll in one or all of the July presentations.

China is an increasingly explosive topic in the news today. Wrong doings and misdeed by the Chinese Communist Party (CCP) are coming to shocking light and evidence of China’s calculated challenge to the American way of life is escalating. However, most people are not yet aware of the true magnitude of the threat China poses through its hidden technological advances and secret space program aimed at dominating space. People need these facts and answers now.

In this exciting 3-Part Webinar series, you will learn never before seen information about China’s development of a secret space program, its connection to pyramids, extraterrestrials and ancient technological artifacts, along with the CCP’s long term strategic goals for global dominance, the help it’s receiving from the Deep State and the necessary steps individuals can take to help ensure the preservation of liberty and freedom.

The surveillance, control and censorship model of China can be avoided, but it will take citizens offering their educated and informed collective voices to decision makers. Facilitating humanity’s expansion into outer space is fundamentally important for establishing global peace, and you will learn how you too can take positive action.

While living in the United States, a brilliant Chinese scientist, Dr. Tsien Hsue-shen, is chosen to work on the US (Army) Air Force’s most classified technologies for over a decade during the 1940s – 1950s. Suddenly, he is outlandishly targeted by the FBI, traded in a prisoner exchange by President Eisenhower and returns to China in a sequence of events orchestrated by the Majestic 12 Group/Deep State. These contrived events ultimately led to China’s development of a military-run secret space program using exotic electromagnetic propulsion systems now challenging US military dominance on Earth and in outer space.

China has a rich ancient history with many legends of advanced flying technologies, mysterious underground civilizations and extraterrestrial contact. What is the truth behind these legends and are China’s mysterious pyramids older than contemporary archeologists claim? Do China’s pyramids possess hidden repositories of long forgotten technologies that are secretly being studied and reverse engineered by leading Chinese scientists with the help of extraterrestrial visitors? Why did Chinese military forces, with Soviet assistance, invade a large UFO base built by Agartha and did they take away flying saucer technologies? All these questions will be answered with persuasive evidence and facts about China’s carefully guarded connections to ancient peoples, artifacts and the stars.

China is in the midst of a stealth war against the USA where it is using an asymmetric military strategy called “Assassin’s Mace” to dominate the strategic high ground of space, and replace the US as the world’s hegemon before 2049 – the 100th year anniversary of the Communist Revolution. By 2030, China’s economy will outgrow the US, and China plans to use its vast economic resources to project its presence deep into space in ways that may lead to escalating military confrontations with the newly created US Space Force.

“Get Your Answers” Q&A Debrief

In this special Debrief session, attendees will be able to ask Dr. Salla questions on ANY topic. To make this event more personal, enrollments are limited to only 30 people.

This is an interactive format in which participant questions will steer all the topics covered by Dr. Salla, whose expertise in secret space programs, international politics, Q, insiders, extraterrestrial contact and more spans a career of over 30 years and 13 books, including the bestselling Secret Space Programs Series.

The field is wide open to you, so prepare your questions and get ready for a personalized Debrief where you can “Get Your Answers” with Dr. Salla in this engaging limited attendance Zoom session.

2 hours
Limited to 30 attendees – We recommend you book early!
Webinar recording available to attendees for 30 days after live event.