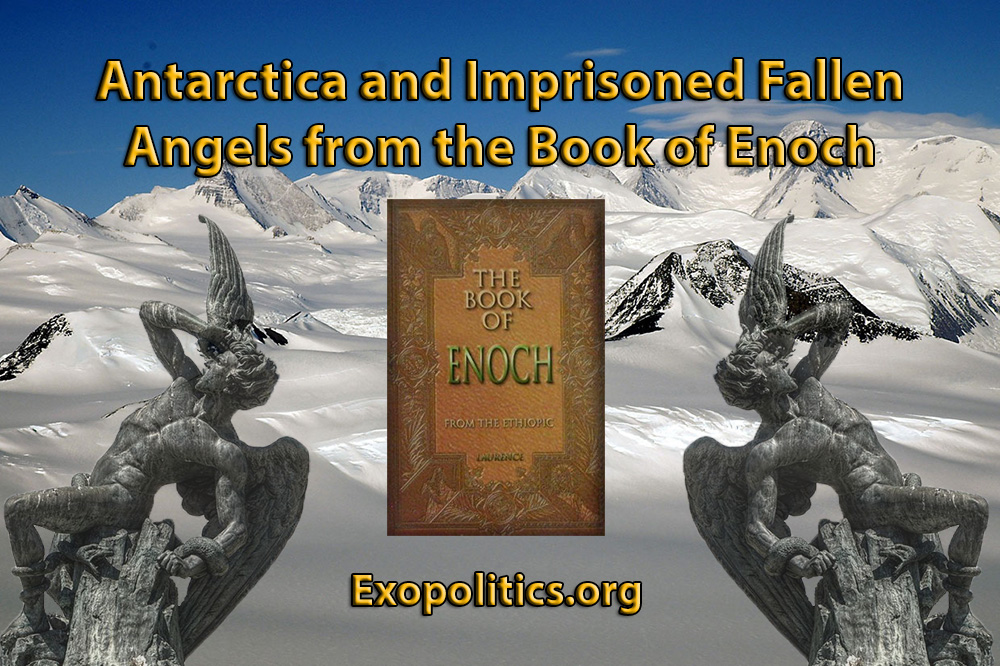 Antarctica and Imprisoned Fallen Angels from the Book of Enoch

On March 14, Israeli News Live published a provocative story titled “The Fallen Angels Imprisoned in Antarctica and are still Alive.” The commentator, Steven Ben-Nun, analyzed the apocryphal Book of Enoch, which describes the experiences of Enoch, a pre-deluvian biblical figure, who was taken into the heavens to witness and play a key role in a major celestial conflict.

Enoch became the principal intermediary between two sides of the conflict between the “Fallen Angels”, and the “Righteous Angels” serving an all knowing deity referred to as “the Lord”. There were multiple issues in the conflict such as Fallen Angels interbreeding and/or performing genetic experiments with humanity, and passing on forbidden knowledge and technologies to the still developing human civilization.

The Book of Enoch begins with the arrival of 200 Fallen Angels in the area of Mount Hermon, which borders modern-day Lebanon and Syria. The Fallen Angels began interbreeding and/or genetically modifying the local inhabitants.

6.1 And it came to pass, when the sons of men had increased, that in those days there were born to them fair and beautiful daughters.

6.2 And the Angels, the sons of Heaven, saw them and desired them. And they said to one another: “Come, let us choose for ourselves wives, from the children of men, and let us beget, for ourselves, children.” …

6.6 And they were, in all, two hundred and they came down on Ardis, which is the summit of Mount Hermon. And they called the mountain Hermon because on it they swore and bound one another with curses. [Source]

While the Fallen Angels had established an outpost on Mt Hermon, it was Antarctica that they would be removed to ultimately after losing the heavenly battle with the righteous angels, according to Ben-Nun’s analysis of the Book of Enoch.

Ben-Nun cites passages from the Book of Enoch which are very suggestive of Antarctica as indeed the location where Enoch was taken to witness celestial events:

18.5 And I saw the winds on the Earth which support the clouds and I saw the paths of the Angels. I saw at the end of the Earth; the firmament of Heaven above.

18.8 And the middle one reached to Heaven, like the throne of the Lord, of stibium, and the top of the throne was of sapphire.

What’s interesting in the above passage is that Enoch refers to a location that “was burning day and night”. Ben-Nun believes that this fits the description of Antarctica during the Southern Hemisphere summer season when there is 24 hour sunlight.

Regarding the seven mountains, this appears to refer to Mt Vinson in the Sentinel Range of Antarctica, according to Ben-Nun. He also refers to six nearby mountains in the range that might qualify as the mountains described in the Book of Enoch.

Mt Vinson is the highest mountain in Antarctica, and is located towards the middle of the Sentinel Range. It would have stood out just as spectacularly with its snowcapped peaks in ancient times, as it does today.

Regarding the southern and eastern alignment of the six adjacent mountains to Mt Vinson described in the Book of Enoch, Ben-Nun speculates that this was their alignment prior to the catastrophic flood event, which coincided with a shifting of the Earth’s axis of rotation. This corresponds to the research conducted by Sir Charles Hapgood who asserts that pole shifts have been a regular occurrence in Earth’s history. In his 1958 book, Earth’s Shifting Crust, Hapgood proposes that a pole shift had happened at the end of the last ice age, about 11,000 BC.

Ben-Nun’s conjecture is interesting, but as one can see from the map showing the Sentinel Range where Mt Vinson is situated, there are far more than seven mountains in the range. Ben-Nun’s conjecture is not conclusive as he himself points out. Nevertheless, he gives us a possible location of the imprisoned Fallen Angels, Mt Vinson and/or six other mountains in the Sentinel Range.

Ben-Nun goes on to discuss the Book of Enoch and its reference to imprisoned Fallen Angels that were removed from Mt Hermon to Antarctica (Mt Vinson/Sentinel Range):

Ben-Nun’s reference to the Fallen Angels still being alive in their Antarctica prison raises an intriguing possibility. The Book of Enoch describes a future “Year of Mystery” when they are liberated. Is this an event we will shortly witness?

For an answer, we can begin by analyzing some intriguing parallels between Ben-Nun’s analysis of the Book of Enoch, and the recent disclosures of secret space program whistleblower Corey Goode concerning Antarctica.

Like the pre-deluvian biblical figure Enoch, Goode says he has also been taken to witness celestial events by a recently arrived group of highly evolved extraterrestrials called the “Sphere Being Alliance”. Like Enoch, Goode has also been asked to act as an intermediary for both sides in a “heavenly” or solar system-wide conflict.

Goode said this began in March 2015 when he accepted the role as the delegate for the Sphere Being Alliance in on-going negotiations between different factions and groups from both Earth and off-world civilizations.

Goode said that he has been taken to Antarctica twice to witness events. The most recent in January 2017 involved him viewing the remains of a Pre-Adamite civilization that had flourished until a major global catastrophe corresponding with the great flood that destroyed coastal cities and low-lying land all over the world around 12-13 thousand years ago.

Goode said that the Pre-Adamites survived by entering stasis chambers in the largest of three miles long motherships that crash landed on Earth around 60,000 years ago, after the pre-Adamites were expelled from the Moon due to a conflict with the dominant extraterrestrial factions there.

The Pre-Adamites set up their major base of operations in Antarctica, and established outposts in Asia, Europe and the Americas, according to Goode. Conflict soon emerged between the Pre-Adamites and other human-looking extraterrestrial groups, who had been conducting 22 genetic experiments with surface humanity for nearly 500,000 years.

This is where Goode’s historical account resonates with Ben-Nun’s analysis of the Book of Enoch. Goode’s Pre-Adamites appear to be the same “Fallen Angels” described in Book of Enoch in terms of their interbreeding and/or genetic experiments with the local human population.

In the case of the Mt Hermon landing of the 200 Fallen Angels, this is consistent with Goode’s claim that the Pre-Adamites established colonies all over the Earth where they genetically altered the local humans and installed hybrids into leadership positions.

Regarding the Righteous Angels described in the Book of Enoch, these appeared to be the extraterrestrial groups that had been conducting 22 long term genetic experiments which were being interfered with by the Pre-Adamites.

The Sphere Being Alliance, insofar as they have leveled the playing field for constructive negotiations between different space programs and extraterrestrial factions, the modern-day Fallen and Righteous Angels, appear to be playing a similar role to the all knowing Lord mentioned in the Book of Enoch.

Ben-Nun’s analysis that the Fallen Angels were imprisoned in Antarctica, and are still alive, corresponds with Goode’s claim that the Pre-Adamites are in statis-chambers on one of their massive Motherships buried deep below the Antarctic Ice Shelf.

Finally, Goode has revealed that excavations in Antarctica are underway, and that the stasis chambers containing the pre-Adamites have been found. The hybrid descendants of the Pre-Adamites, which are among the elite bloodline families that secretly have ruled humanity, are eager to gain access to the stasis chambers and to reawaken their ancient ancestors.

The goal of doing so appears to be to have the Pre-Adamites re-assume once again their former dominance in planetary affairs, thereby allowing their hybrid off-spring to step out of the shadows and directly rule over humanity. This suggests that the “Year of Mystery” mentioned in the Book of Enoch, when the “Fallen Angels” are liberated, may be very close. All this leads to an intriguing question. Is Goode himself a modern-day Enoch being given key roles in witnessing and mediating between different human and extraterrestrial factions as the delegate of the Sphere Being Alliance, which appears to be functionally identical to the all-knowing deity described in the Book of Enoch? If so, this would suggest that Enoch himself was an extraterrestrial contactee of the Sphere Being Alliance or a similar group, 13,000 years ago.

If the Pre-Adamites/Fallen Angels are awakened/liberated, then there will certainly be a need to deal with them and their hybrid off-spring about what roles they are to play as humanity awakens to the truth of its history, and manipulation by multiple extraterrestrial groups and elite bloodline families.