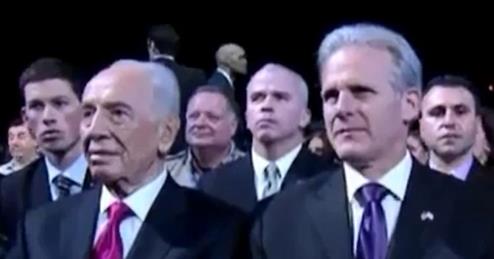 A video recording from President Obama’s address at the 2012 AIPAC conference at the Washington Convention Center shows a mysterious looking figure among the Secret Service agents protecting him. From one camera angle, the figure looks uncannily like a tall Gray alien; with no noticeable ear, mouth or facial hair. From most other camera angles, the figure appears as a bald Secret Service agent who looks human enough. Not so according to a popular Youtube video that has over 330,000 hits since its March 13, 2013 release. The bald Secret Service agent is a shape shifting humanoid alien, and the video provides detailed analysis supporting its remarkable claim. So was it all just a trick a light, or did the camera capture something we weren’t supposed to see? In the 1988 science fiction movie classic, They Live, extraterrestrials live among humanity using advanced technology to hide their physical differences. Is it possible that the Secret Service employs aliens to protect President Obama, and uses some kind of advanced technology to hide them from the public eye?

The idea of the U.S. Secret Service employing aliens appears far-fetched, but it was only back on December 7, 2012 that Prime Minister Medvedev said in candid off-air comments that Russian Presidents are briefed on aliens living among us. He went on to add that a highly classified national security agency monitors aliens residing on Earth. Major media thought it was a case of Medvedev’s dry humor, and that he gave the joke away when he referred to the Hollywood Blockbuster, Men in Black. Yet Medvedev appeared to be referring to a Russian documentary instead, one produced by the same network that the female reporter who asked him the alien question worked for. In fact, the reporter asked the question because the network was working on another extraterrestrial related documentary. A disturbing possibility is that the meteor strike on Russia on February 15, 2013 was related to Medevedev’s candid off-air comments about aliens among us. A Russian Parliamentarian claimed that the meteor strike was a warning to the Russian government. Was it a warning that Russian needs to maintain secrecy about alien visitors? If Medvedev wasn’t joking, it is possible that aliens secretly living on Earth aren’t just monitored, but also employed in sensitive security positions like the U.S. Secret Service.

It’s a fact that advanced technologies such as invisibility have been developed for use in classified military projects for some time now. Proof-of-concept demonstrations in the open source literature are available for funding and development purposes by military contractors. Classified versions would predictably be far more advanced, and very likely have been operational for some time now. It’s reasonable to conclude that invisibility or related technologies are used by the Secret Service to make agents disappear, and/or alter their physical appearance. Consequently, Secret Service agents very likely use invisibility technology when protecting the President and other VIPs. Such technologies may also be used by any extraterrestrial aliens recruited into the Secret Service. Is President Obama being guarded by aliens, or was it all just a trick of light? You decide!