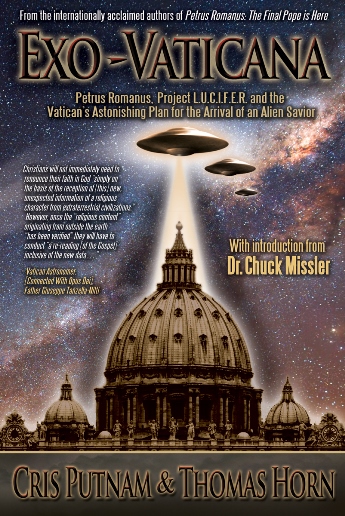 Pope Francis to announce extraterrestrial savior according to new book

Written by Dr Michael Salla on April 1, 2013. Posted in Exotheology Yesterday Pope Francis I celebrated his first Easter Mass as the leader of the world’s 1.2 billion Roman Catholics. In his first “Urbi et Orbi” speech – Latin for “to the city [of Rome] and the world” – he called for peace in the Middle East; an end to human trafficking and greed; preventing the exploitation of natural resources; and protecting animals by becoming “responsible guardians of creation.” The Pope normally gives two Urbi et Orbi speeches each year where he deals with major challenges faced by the world and Christendom.

In a future speech it has been predicted that he will discuss a unique challenge that the world faces according to the authors of a new book. In Exovaticana, Chris Putnam and Tom Horn predict that the new Pope, Francis I, will soon announce the existence of extraterrestrial life, among whom an alien savior will emerge to reinvigorate Christian teachings!

Putnam and Horn, successfully predicted in their last book, the best-selling Petrus Romanus: The Final Pope is Here, that Pope Benedict would resign rather than die in office. They based their prediction on St Malachy’s, Prophecy of the Popes. According to Putnam and Horn, Francis is the final Pope, “Petrus Romanus”, who will oversee the dissolution of the Catholic Church as predicted in St Malachy’s prophecy, by announcing an extraterrestrial savior.

Putnam and Horn claim to have documented the research and evidence supporting their startling prediction in their new book, Exovaticano – advance orders of which have already rocketed it into Amazon’s best seller lists for its April 15 release. On their website and in Exovaticano, they claim that the Catholic Church hierarchy plans to announce an extraterrestrial savior who will usher in a new world spiritual belief system that supplants traditional Christianity and organized religion. Putnam’s and Horn’s research is based on interviews with Catholic scholars and scientists who were willing to discuss the Prophecy of the Popes and the possibility of extraterrestrial life.

Among the Catholic researchers interviewed is Dr Guy Consolmagno, a Jesuit and Vatican astronomer who generated much press interest in 2010 for his views on alien life. He said: “Any entity – no matter how many tentacles it has – has a soul.” When asked if he would baptize an alien, Consolmagno replied: “Only if they asked.” Putnam and Horn cite a difficult to find document written by Consolmagno who makes a remarkable claim about the relationship between Jesus and extraterrestrial life:

Perhaps it’s not so far-fetched to see the Second Person of the Trinity, the Word, Who was present “In the beginning” (John 1: l), coming to lay down His life and take it up again (John 10: 18) not only as the Son of Man but also as a Child of other races?

At first reading, it appears as though Consolmagno is suggesting that Jesus may have been the “Star-Child of an alien race” as Putnam and Horn suggest. On re-reading Consolmagno’s quote, it appears that he is instead claiming that the second aspect of the Holy Trinity that was personified in the life, death and resurrection of Jesus Christ, may be recognized as relevant to other worlds and races. This would make it possible for Consolmagno to baptize aliens, even on their own worlds.

If Jesus divinity is recognized by extraterrestrial races, and expressed in a unique way by them, then it is easy to understand why Consolmagno believes that contemporary society will “look to the Aliens to be the Saviors of humankind.” Consolmagno, as Putnam and Horn make clear, is no rogue priest making wild theological pronouncements about alien life. Consolmagno’s boss and Chief Vatican Astronomer, Dr Gabriel Funes, stunned the world in May 2008 when he revealed that it is acceptable for Catholics to openly contemplate extraterrestrial life. In an interview he said:

Just as there is a multiplicity of creatures on earth, there can be other beings, even intelligent, created by God. This is not in contrast with our faith because we can’t put limits on God’s creative freedom… “Why can’t we speak of a ‘brother extraterrestrial’? It would still be part of creation…

Both Funes and Consolmagno are scientific advisors to the Pope and advise him on all matters concerning astronomy – which includes the likelihood of a future discovery of extraterrestrial life. It’s inconceivable that both Funes and Consolmagno would have been able to make public their beliefs about extraterrestrial life without the approval of the previous Pope, Benedict XVI. It is highly likely that the Vatican astronomers will continue to be given permission to make statements about extraterrestrial life and its theological implications. So is it pure science driving these statements from Vatican astronomers or something else?

Funes and Consolmagno are best known among the scientific community for organizing an astrobiology conference on the grounds of the Vatican in November, 2009. The conference contemplated the consequences of the latest scientific advances which was made possible the discovery of exoplanets. A process that according to many astronomers makes the discovery of extraterrestrial life a question of “when” rather than “if”. For example, Dr Chris Impey from the University of Arizona’s Astronomy Department said at the 2009 conference:

As scientists gather to discuss progress in astrobiology, we still only know of one planet with life: our own. But there is a palpable expectation that the universe harbors life and there is hope that the first discovery is only a few years away.

Putnam and Horn claim that the Vatican’s astronomical telescope (Vatican Advanced Technology Telescope) located at the Mt Graham Observatory, Arizona, is tracking something that has yet to be announced to the world. They quote from Father Malachi Martin, another Jesuit, who cryptically revealed something that was being tracked by Vatican astronomers that had great significance. In a 1997 interview on the popular radio program Coast to Coast AM,

Martin said:Because the mentality…amongst those who [are] at the…highest levels of Vatican administration and geopolitics, know…what’s going on in space, and what’s approaching us, could be of great import in the next five years, ten years.

On the question of what precisely is being tracked, Putnam and Horn claim that “people familiar with Malachi believe he may have been referring to a near-future arrival of alien intelligence.” The aliens will be carrying with them a message that transforms Christianity from an earth-centric faith system into a new galactic faith that welcomes extraterrestrials as our “spiritual brothers”. Who will be the savior that emerges from the incoming extraterrestrial object secretly monitored by astronomers that, if Putnam and Horn are correct, the Vatican is preparing to soon announce in an “Urbi et Orbi” speech to the world?