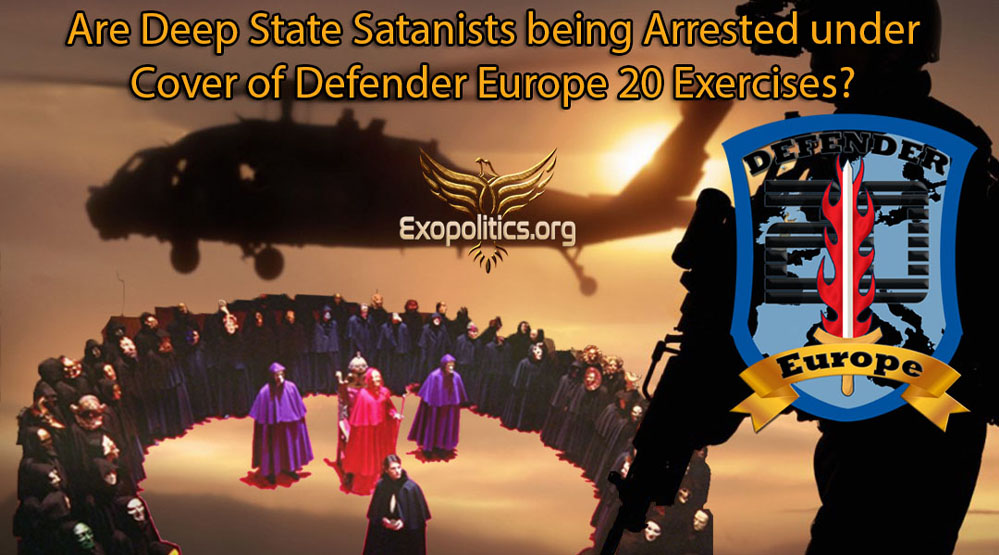 Are Deep State Satanists being Arrested under Cover of Defender Europe 20 Exercises?

While much of Europe has been closed off due to the Coronavirus pandemic, elite military forces from 17 NATO and partner countries are using the Defender Europe 20 Military Exercizes as a cover to arrest leading Deep State Satanists entrenched in fortified European compounds, according to a New York Times best-selling author. David Wilcock made his startling claim in his latest video live-streamed on March 19, to his 288,000 You Tube followers.

In his video presentation, Wilcock cites at length a March 15 English language summary of an article by Manlio Dinucci, who wrote about the Defender Europe 20 Exercices on March 3 for the Italian web newspaper Ill Manifesto. The March 15 article summarizing Dinucci’s earlier Italian language article is titled “30,000 American Troops Arrive in Europe Amidst COVID-19 Crisis”, and begins as follows:

Manlio Dinucci writing in the Italian web newspaper, Il Manifesto on March 3rd, 2020, reports that despite Trump’s travel ban 20,000 American troops will be traveling to Europe in the next few days–joining the 10,00 already there.

Despite the travel advisories issued by the U.S. State Department for Americans traveling to northern Italy and elsewhere in Europe, Dinucci is again cited from his original March 3 article:

However, one category of U.S. citizens is exempted from these rules: the 20,000 soldiers beginning to arrive from the United States in European ports and airports for the Defender Europe 20 exercise, the largest U.S. troop deployment in Europe in the last 25 years. Including those already present, about 30,000 U.S. troops will participate in April and May, flanked by 7,000 troops from 17 NATO member and partner countries, including Italy.

The author of the English language article citing Dinucci, who uses the pseudonym, Poppalloff, subsequently points out:

None of these troops have been issued with Bio/Hazchem suits or masks, which seems a little reckless of the American Government if COVID-19 is really the threat that we are being told that it is…

Dinucci is then cited again:

“The 30,000 U.S. soldiers, who “will spread through the European region,” are in fact exempted from the preventive COVID-19 regulations that apply to civilians. The assurance given by the U.S. Army in Europe that “we are monitoring the Coronavirus [COVID-19]” and that “our forces are in good health” is enough.

At the same time, the environmental impact of a military exercise of this magnitude is ignored. U.S. Abrams tanks will participate, weighing 70 tons, with depleted uranium shells. Each tank consumes 400 litres of fuel per 100 km, producing heavy pollution to deliver maximum power.”

Popalloff, in summarizing Dinucci,  points out the suspicious nature of many European citizens being in locked down in their homes, while elite NATO troops are able to travel around without any restrictions at all. Popalloff, concludes his/her article by saying that the “pandemic is obviously a cover story for some kind of powerplay by the 1%.”

The implication here is that the Coronavirus pandemic, the European lockdowns, and the NATO exercise all combine into a nefarious coup being covertly orchestrated by the 1% (the Deep State), and people need to be concerned about what is really happening behind the scenes.

In contrast, Wilcock cites extensively from the March 15 English language summary of Dinucci’s earlier March 3 article, and reveals what he has been told by his own insider sources, who tell a very different story of what is really happening behind the scenes:

What we’re getting from our briefings folks is that this is a targeted effort for the mass arrests that I’ve been telling you about this whole time. That’s why they’re there. There 37,000 troops from 18 countries including the US. … you better believe those are elite soldiers they’re very trained. What are they doing? They’re going to the places where the Deep State is. They’re infiltrating their strongholds and they are arresting people.

Wilcock goes on to discuss the use of Abrams tanks in the Defender Europe 20 Exercise for a purpose that is very different to the coup that Dinucci proposed was underway:

“U.S. Abrams tanks will participate, weighing 70 tons, with depleted uranium shells.” Ok, well that’s weird, why do they need tanks. It’s a military exercise, the biggest one in 25 years. Well maybe they’re going into to be going into some people’s stronghold’s folks. Some of these guys that are billionaires, they’re Satanic. If you start to learn about this, that’s what’s really going on. You got to bust in through those compounds, you got to get these people. You got to arrest them. Hopefully, they don’t provide armed resistance, they’re not going to make it, okay.

This is the crux of Wilcock’s analysis of current events in Europe that involve an unprecedented shut down of people’s movements and businesses, while NATO is simultaneously conducting its largest military exercises in the last 25 years. The well-protected compounds of Deep State officials, many of whom are practicing Satanists, who frequently conduct child sacrifices, are being raided by elite military special forces under cover of the NATO exercises.

Of the two explanations offered so far for the massive NATO exercises occurring in the midst of the coronavirus pandemic and lockdown in Europe, Dinucci/Poppalloff’s concerns that these are a cover for a coup by the 1% (Deep State) and Wilcock’s diametrically opposing view that Deep State officials are being arrested under cover of the military exercizes, I find Wilcock’s assessment to be far plausible. This is despite reports that NATO leaders have cancelled a number of Europe Defender drills due to Coronavirus concerns.

Importantly, Wilcock’s assessment is consistent with ongoing revelations from the military intelligence group QAnon, which has worked closely with the Trump White House since first coming forward in October 2017. In a number of articles, I have pointed out my reasons for concluding that QAnon comprises White Hats within the U.S. military who are locked in a behind the scenes civil war against the Deep State, whose senior leadership comprises practicing Satanists.

If one accepts what QAnon has revealed in multiple posts which advises readers to “prepare for the storm”, and the taking down of Deep State leaders, then Wilcock’s assessment is more likely than the alternative offered by Dinucci and Poppalloff.

Fortunately, I believe we will not need to wait long to learn the truth about what’s happening in Europe with the scaled-back NATO drills, the unprecedented Coronavirus lockdown, and alleged mass arrests of Deep State leaders occurring behind the scenes.

The world wants to learn the truth about who is really behind the Coronavirus pandemic, and the U.S. military also has strong reasons to reveal the truth given that an increasing number of Chinese officials are accusing the U.S. Army in the initial spread of the Coronavirus in Wuhan during the October 2019 World Military Games.

Note: An audio version of this article is available here.