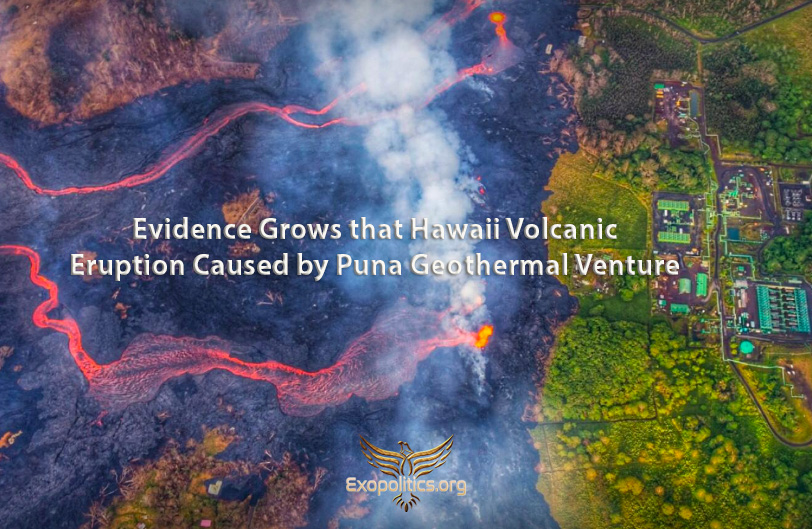 Written by Dr Michael Salla on May 27, 2018. Posted in Featured, science and technology, US Politics

More scientific data shows how the fracking may have been deliberately designed to create a geological process by which lava would drain from Kilauea’s summit into the East Rift Zone so as to create large new vents that would destabilize the geology, and possibly trigger a major collapse in the Hilina Fault System.

A video prepared by Pacific Tsunamic Warning Center clearly shows that the epicenter of earthquake activity centered in the lower Puna region is adjacent to the Puna Geothermal Venture.

The following map from the video depicts all the earthquakes and the eruption site for the recent lava outbreak from 30 April to 6 May. The eruption occurs mainly in Leilani Estates, which is right next to the Puna Geothermal Venture. The following map by the US Geological Service shows where the Puna Geothermal Venture (marked PGV) is in relation to the current volcanic eruption. Here’s a photo showing the lava outbreak and its very close proximity to the Puna Geothermal Venture (circled in red) on May 22. Since then, it has begun flowing onto the property, but still not reached any of the wells. The scientific data clearly shows how the Puna Geothermal Venture (PGV) is at the epicenter of the volcanic eruption. Is this merely chance or by design?

In my previous article and video published on May 15, I wrote about how the fracking activity at PGV has been scientifically linked to earthquakes. The following diagram was included which clearly showed the strong correlation:

Since the publication of my article, there have been other articles linking the fracking at PGV with earthquakes, and also raising the question of whether the fracking caused the volcanic eruption. The most prominent one has come from Jon Rappoport, who wrote a May 22 article on his blogsite titled: “Did fracking cause the Hawaii volcano eruption?”

The following map produced by the Hawaii Volcano Observatory shows how the recent earthquake activity led to the Hilina Slump slipping towards the Pacific Ocean Observatory by about two meters, which is massive in geological terms. Here’s how an article produced by the Berkeley Seismology Lab explained the above photo:

While the earthquakes under the summit and under the eruption center at the eastern end of the rift zone are generated by the movement of magma, the big event and its aftershocks under the pali have a different origin. This becomes obvious in Figure 2 [reproduced above]. It shows how the permanent GPS stations installed and operated by the Hawaii Volcano Observatory moved in response to the 6.9 quake. The red arrows indicate the direction of horizontal motion and all of them point to the southeast. The length of each arrow represents the extent of the motion with the longest ones having moved by more than 2 feet. This shows that the flank of the cliff on the southern coast of Hawaii has moved further towards the ocean.

What the article didn’t mention was that the 6.9 quake on May 4 was triggered by the massive outflow of lava from Kilauea Summit, Halemaʻumaʻu crater, into the East Rift Zone. Basically, the volcanic eruption in the Lower Puna region (where the Puna Geothermal Venture is located) is being fueled by fresh lava from the summit of Kileaua, which is being drained towards it.

While it began slowly as old lava oozed out of the new volcanic fissures in Leilani Estates, the recent upsurge is a result of fresh new lava arriving from the Kilauea Summit. The Honolulu Advertiser explained the process:

The first weeks of the eruption saw pasty, crumbly, slower-moving aa lava oozing slowly through the fissures. But that changed Friday afternoon, scientists said, when preliminary results from a testing sample showed a different composite of lava, the smoother pahoehoe variety that is generally fresher, hotter and faster.

The following diagram shows the dynamics of the lava flows linking Kilauea Summit, the Pu’u’O’o Vent, and the East Rift Zone.

An article by Scott Johnson in Ars Technica, explained the process as follows:

This is where we finally get to the issue of whether the fracking at Puna Geothermal Venture was secretly an attempt to weaken the underlying geology in order to create a path for fresh lava to drain from Kilauea summit into the East Rift Zone. As the following diagram of the East Rift Zone illustrates, lava follows the path of least resistance in a highly pressurized environment. This principle would be well known to any geologist, or plumber if we use Johnson’s analogy. This means that some would have been aware from the inception of the PGV in 1993, that the process of using highly pressurized water on subterranean rocks (aka fracking), severely compromising the underground environment, would effectively open up a new path for lava to flow from the Kilauea summit and the Pu’u’O’o Vent

Apparently, this is exactly what was planned by those behind the Puna Geothermal Venture according to Paul Collin, who has strong ties to the U.S. intelligence community:

It is understood that Hawaii’s geothermal power company “Puna Geothermal Venture” (PGV) purposefully “drilled” wells and “fracked” into the ground in such a way that lava from Earth’s mantle would eventually be redirected to open-up and spout a ‘brand new volcano within the island of Hawaii, and sure enough facts set forth by a USGS chart and briefing that lava has now been routed right along the same linear path south-east, which actually punched-out a ‘brand new caldera volcano’ within the “Lower East Rift Zone” adjacent to the extremely weak debris landmass known as the ‘Hilani Slump’ consisting of 10% of Hawaii’s southeastern land mass that was already slipping into the Pacific Ocean ‘without the new lava delta’ growing huger; about 400 meters per hour on land (alone) – threatening a tsunami event from coast to coast.

In my May 15 article, I described how the creation of a massive tsunami through a collapse of the Hilina slump was the secret purpose behind the creation of the Puna Geothermal Venture, whose owners are linked to the Rothschild family.

I wish to state for the record that I don’t believe the plan will succeed, and that the hoped-for megatsunami that would cripple the United States economically and militarily for decades to come will not occur. However, it is vitally important to expose this plan was and who is behind it.

My view is that the Rothschild family has chosen China as the hub for the kind of New World Order that the Deep State/global elite would like to emerge. That would be an openly authoritarian state where AI technology is used to monitor citizens and quickly remove troublemakers expressing dissenting political views.

The United States is the main obstacle to such an authoritarian New World Order being created, and secret geo-engineering was therefore undertaken in Hawaii that would create a megatsunami via a major collapse of the Hilina fault system.

If the plan had worked, then it is not hard to see how the U.S. would have been unable to prevent a New World Order emerging – based on China’s authoritarian socio-political model masked behind AI technology designed to appeal to a tech savvy Millennial generation.

It is also important to mention that this is the second time in 2018 that Hawaii was targeted by the Deep State/global elites for some kind of catastrophic event that would economically and militarily weaken the United States. On January 13, 2018, a ballistic nuclear missile was sent by a secret CIA linked Navy, called the “Dark Fleet”, in a false flag attack that was meant to embroil the United States in a catastrophic nuclear war.

In a January 20 article, I provided documents and references showing how the CIA has built its own secret fleet that conducts covert operations on behalf of the Deep State/global elite. Thankfully, that plan failed due to the intervention of a U.S. Air Force based secret space program that shot down the missile, as I discussed another article.

Since 2004, I have lived on Hawaii’s Big Island. On May 1, 2018, I moved from the lower Puna region just as the earthquakes intensified, to the Kona side of the Big Island. It boggles the mind that such a beautiful part of our planet is being repeatedly targeted by the global elite for catastrophes that will facilitate their New World Order plans.

I sincerely hope that appropriate legal and political action is taken against: all those behind the Puna Geothermal Venture for their role in the devastation that is being caused in the lower Puna region by their secret fracking; the local County officials that were likely bribed to remain silent over the risk of permitting such a venture; and also against the global elites who put together such a nefarious plan.