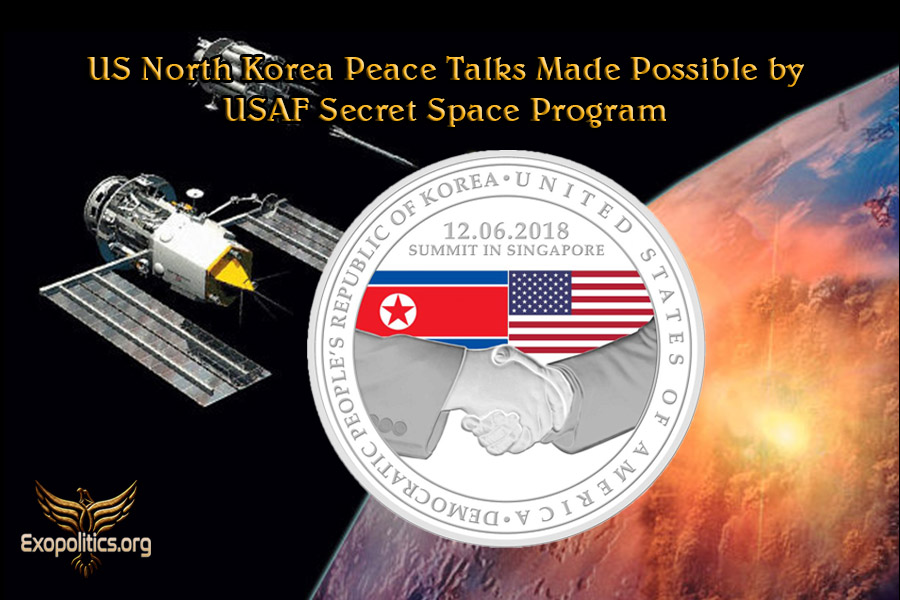 On June 12 President Donald Trump meets with North Korea’s supreme leader, Kim Jong-Un in Singapore to resolve the confrontation over the latter’s nuclear weapons program. The on-off-on again meeting has been a surprise to many believing that the bellicose language used by both leaders throughout 2017 was a sure sign that a nuclear confrontation was inevitable.

During Kim’s January 1, New Year’s Day address, he had announced that North Korea’s nuclear weapons program was completed with the successful testing of a hydrogen bomb and an intercontinental ballistic missile, the Hwasong 15. North Korea was now capable of not only launching nuclear armed ICBM missiles into U.S. territories such as Guam and Hawaii, but was also capable of hitting the U.S. mainland.

On January 17, South Korea announced that a diplomatic breakthrough had been reached with North Korea. The two Koreas would march together at the upcoming February 9-25 Winter Olympics, and field a joint ice hockey team.

This was followed a few weeks after the end of the Olympics, by Kim Jong-Un’s March 6 offer to put his nuclear weapons program on hold and start candid talks with the U.S. Trump immediately accepted Kim’s offer, which had been mediated behind the scenes by senior South Korean officials.

Exactly why North Korea decided to reverse its bellicose policies, improve relations with South Korea, and enter into denuclearization talks after completing its nuclear weapons program has left many media sources puzzled.

One explanation is that the talks are solely due to warming ties between North and South Korea. Another is that North Korea is desperate for cash after years of punishing economic sanctions that have been very effective.

Some believe that Kim has launched the meeting merely to gain time and does not intend to follow through on any agreements reached at the talk. Yet another explanation is that Trump is setting Kim up for failure in order to justify future military actions against North Korea, where Kim will be scapegoated as the villain.

What multiple media sources have not considered is whistleblower testimonies revealing a deeper dynamic at play at the U.S. North Korea summit.

On October 7, 2017 Trump issued two tweets where he gave a stark warning about what his administration was planning for North Korea:

In a previous article, I pointed out that the kind of weapons systems required to take out North Korea’s nuclear infrastructure would have to be orders of magnitude more powerful than those used in the air wars against Iraq in 2003 and Serbia in 1999.

The U.S. would have to achieve its strategic goals in a matter of minutes, rather than weeks in order to prevent retaliatory nuclear strikes that could kill millions. To do so, Trump was ready to authorize the use of highly classified space based weapons against North Korea.

At the official level, space based weapons are non-existent and are merely being planned for the future.  However, whistleblowers/insiders have revealed the existence of operational space weapons such as “Rods of God”, which drops large rod-like projectiles from space with pinpoint accuracy and devastating results.

The effects of a “Rods of God” space weapon was depicted in the movie G.I Joe 2 according to Corey Goode and Emery Smith in a recent interview with David Wilcock:

David: They’re doing these beautiful visuals in the movie with computer animation.

Corey: Oh, yeah, well, especially the second one when they did the Rods from God attacks .. . . on the Earth when that’s exactly what we’re looking at in the North Korea thing.

Emery: Right. Right. Interesting. I didn’t see the second one.

David: They’re telephone-pole-sized pieces of tungsten that you can drop onto the Earth, and just gravity causes a very, very severe explosion that can devastate a huge amount of space.

David: And he had talked about that. And I only watched the second “G.I. Joe” film recently, and I couldn’t believe that it was in there.

Emery: Wow! Yeah, that’s pretty amazing for them to blatantly come out and expose that classified information, but we do start to see that now all the time with the movies are giving tidbits.

In an earlier interview, I asked Goode what his sources had told him about the space weapons that were planned to be used against North Korea, he replied:

I would expect a number of EMP detonations over NK [North Korea] while at the same time “Rods from God” [RFG] projectiles would be released from orbit. It should be noted that North Korea has taken extreme measures to harden their bunkers and systems against EMP attacks.

Each RFG Platform releases 12 projectiles the size of telephone poles. These projectiles are made of Tungsten and are coated with ceramic and have a guidance system similar to the JDAM conventional bombs.

The existence of a U.S. Air Force run secret space program with space based weapons technologies is supported by photos taken on October 23, 2017, in the vicinity of MacDill Air Force Base, Tampa, Florida, which showed a rectangle shaped UFO.

The photographer, JP (who I have known since 2008), claims he had been earlier taken inside the rectangle UFO, and had been informed that it was a weapons platform. He says that he witnessed uniformed military personnel wearing the insignia of U.S. Air Force Special Operations who could operate the weapons system.

Trump’s secret plan to use “Rods of God” and other space based weapons against North Korea had greatly worried Kim, but it was the Hawaii ballistic missile alert on January 13, which took him down the path of cooperation. The missile alert coincided with Kim’s decision to begin secret talks with South Korea to improve relations through the 2018 Winter Olympics, which was officially announced only four days later, January 17.

So what happened during the Hawaii ballistic missile alert that made Kim seek cooperation with South Korea as a prelude to offering genuine denuclearization negotiations with the Trump administration?

On Saturday morning January 13, residents of the Hawaiian Islands received an emergency alert that warned of an incoming ballistic missile and instructed everyone to take cover. This is what appeared on peoples’ cell phones at 8:07 am local Hawaii time: Multiple sources claiming that a ballistic nuclear missile had indeed been intercepted, and a cover up was underway were analyzed in my first article on the incident. My second article pointed to a rogue Deep State/CIA faction that used a boomer submarine to create a false flag attack, which was intended start a war with North Korea.

My third article on the incident described a U.S. Air Force run secret space program that had used its deep space platforms to shoot down the ballistic missile that had been launched. In my fourth article, I pointed out how the whistleblower group QAnon, which is closely tied to the White House, had confirmed that the Hawaii missile alert had been a real false flag attack, and that the goal was to frame North Korea as the culprit.

Consequently, the June 12 Summit marks a genuine turning point in U.S. North Korea relations. There is a real possibility that agreements will be reached to formally end the Korean War, start a genuine Korean unification process, and even lay the foundation for a U.S. military withdrawal from the Korean peninsula.

The back story as to how a Secret Space program was instrumental in bringing about the US North Korea Summit through the threatened, and later actual, use of its space based weapons platforms, is something that will be eventually revealed through official disclosure of these highly classified USAF programs.