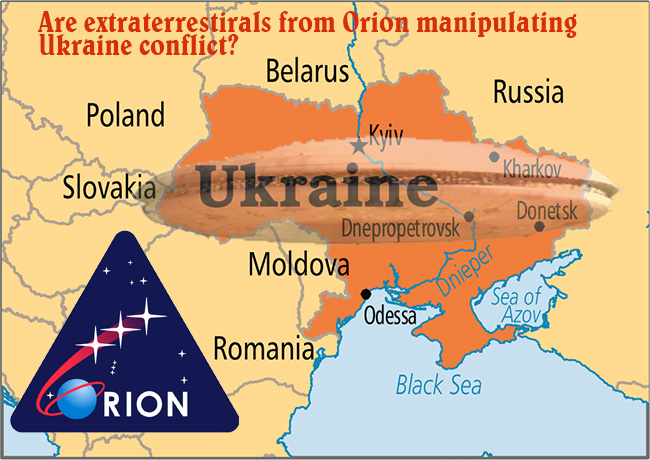 In an article published today on ExoNews.org, Richard Cook, a former NASA engineer and U.S. Treasury official for over two decades, shared some unusual insights about what is driving the Ukraine conflict. Cook’s analysis takes us much further than the geopolitical machinations of great powers jockeying for regional influence. He goes far beyond the musings offered by the mainstream media focusing on the psychology of key political leaders. Cook goes to the heart of a problem confronting humanity. An extraterrestrial presence that has both benign and malevolent factions, the latter of which acts as a third force that manipulates political elites and nations into self-destructive wars.

In his article titled, “Making Sense of Ukraine Through a History of Extraterrestrial Intervention,” Cook elaborates on the Ukraine conflict. He uses communications from the RA material to elaborate upon the different extraterrestrial factions that have intervened in human affairs in our recent history. He identifies two main factions. The first of which he explains:

The RA Material explains that the influx of UFOs/ETs starting around the time of World War II was prompted by the acquisition by mankind of nuclear energy and weapons. This led the higher-vibration beings who stand watch to make their presence known on planet earth. According to RA, these beings constitute a “Council of Guardians” whose headquarters are on the rings of Saturn. Other sources call this Council “The Nine.” Working with them are other extraterrestrial entities who together form the “Confederation of Planets in the Service of the Infinite Creator.”

With regard to the negative faction, Cook explains:

But the opening of the protective gates around earth has also allowed negative entities to slip through. Chief among these, says RA, have been the Crusaders of Orion. These are beings of self-serving character who try to gather disciples interested in manipulating, controlling, and enslaving others. In fact, RA adds, a majority of the UFO appearances of modern times have been of these Crusaders. These are the ones responsible for abductions, animal mutilations, and gloom-and-doom-type channelings. They are allowed by the order of things to prey on human beings, but only by appealing to people’s weaknesses, such as pride, lust, etc. It is the weak-minded who fall for their deceptions and try to use black magic to contact them.

Cook’s analysis then identifies the hidden hand of the third force behind the Ukraine conflict, the “Crusaders of Orion”:

But why is Russia seen increasingly as an enemy? Didn’t we rejoice when the Soviet Union fell and its component states went democratic? Wouldn’t it make more sense to embrace Russia as the return of a long-lost friend to the fold of well-intentioned nations? Instead, it almost seems as if powerful elements behind the scenes want to foment a major war with Russia and possibly China. It makes no sense. The negative frame of mind this attitude signifies is harmful to the point of being pathological. Is it too much to speculate that the hand of the Chariots of Orion is fueling the fire with fear and war-hysteria? Are they stirring the pot just for the delight in seeing people suffer?

Cook’s analysis finally takes us into the real predicament facing humanity today. Most people have been induced into a kind of sleep paralysis where they are not awake to the third force manipulating human affairs:

Also according to RA, the Confederation inspired earth’s scientists to bring forth the technology that gives humanity the opportunity for the leisure required for spiritual pursuits. But technology has been perverted by the Crusaders’ minions for economic exploitation and weapons of war. They use such “gadgets” as television and advertising to keep humanity asleep. Even the internet is used for negative as well as positive purposes. In the Ukraine incident, the Western media are working overtime to demonize Russia and its leaders. Leaders of the Republican Party mock President Obama for his supposed weakness in not being more aggressive, saying, as did former Secretary of State Condoleezza Rice, that the American people “cannot afford to be war-weary.” This is worse than insanity in a world on the brink.

Cook’s article is very helpful insofar as it introduces the reader to a third force manipulating political elites from both sides to embark on self-destructive wars. In an earlier article, I discussed how a hacked phone call between the Estonian Foreign Minister and the European Union’s Foreign Affairs chief, revealed how a shadowy third force was behind the sniper attacks against both protesters and police. I concluded that “the chaos in the Ukraine may be a result of a secret exopolitics conflict between Putin’s Russia and the international power elite responsible for maintaining secrecy about UFOs and extraterrestrial life.” Cook’s analysis casts light on who is behind this international power elite, or third force, manipulating national governments and populations.

While some may question the authenticity of the channeled information the makes up the RA material, it does provide helpful insights into the hidden forces behind international conflict. Cook’s article is an invitation to investigate the possibility of a third force manipulating international conflict, along with the likelihood that it is other worldly in origin.

Russian military intervention in Ukraine and exopolitics
Is hacked phone call of Ukraine sniper attacks evidence of exopolitics conflict?
Russian PM not joking – extraterrestrials among us according to MIB documentary
Is Russia preparing for extraterrestrial disclosure?
World leaders prepare for discovery of extraterrestrial life in 10 years