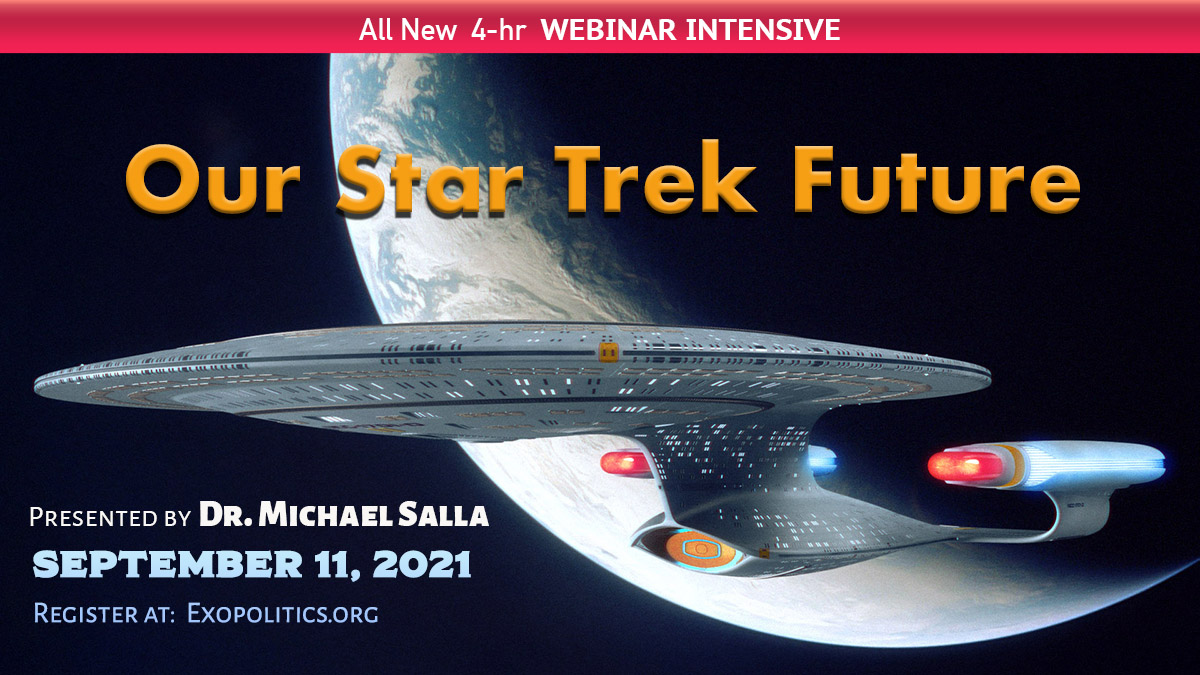 In the midst of Global Pain, Our Star Trek Future is being Birthed

People all over the world have their attention firmly on painful events unfolding all over our planet, and as a result, are not paying attention to something truly astounding happening in space. In many ways, our planet is experiencing a very painful birthing process. If we can look beyond the pain of shattered expectations, collapsing security beliefs, and personal uncertainties, something wonderful is about to happen. A Star Trek Future is slowly being birthed before our very eyes—and we are being helped by some powerful galactic friends.

A Star Trek Future was predicted at a 2019 Space Futures Workshop featuring 60 leading space experts from all over the world, including NASA, NATO, and US Air Force Space Command. They envisaged a multinational space alliance involving commercial, civil, and military aspects that would be forged with the US as the hub. Indeed, if we look at the Star Trek series itself, there are many reasons to believe that it wasn’t science fiction after all, but a future timeline presented to Gene Roddenberry in 1965 by a US Navy secret space program operative.

At this very moment, deals are being struck between multiple national space agencies, major aerospace corporations and military commands all over the world for an unprecedented push into deep space involving vast numbers of people. The Artemis Accords provide the umbrella for the civil and commercial push into space, with NASA as the fulcrum for their implementation. At the same time, US Space Command is forging alliances with like-minded military space commands around the world, and striking deals for the creation of a Combined Space Command Initiative—the foundation from which Starfleet can and will emerge!

Classified technologies are being shared to make possible the construction and deployment of deep space vessels capable of taking humanity deep into our solar system. And we are being helped in this huge undertaking by extraterrestrial friends—the Galactic Federation of Worlds.

This ethical association of extraterrestrial groups is playing the role of midwife to this Star Trek Future. Currently underway, the Galactic Federation is encouraging political unity among the world‘s nations by sharing some of its advanced technologies, which will enable Earth to defend itself against any future takeover attempts by returning negative extraterrestrial groups.

As you are very likely aware from my recent podcasts and articles, I have been covering breaking intel about the liberation of our planet and solar system from a dark alliance of extraterrestrial groups that have been secretly dominating our planet for a very long time due to secret agreements reached with the Deep State (aka Cabal).

Only recently, the negative extraterrestrials have been forced to leave our solar system, resulting in humanity finally gaining planetary and solar system stewardship. The global pain we are witnessing right now is due to the last gasps of a dying regime—the Deep State is playing its final cards in a futile effort to ward off inevitable defeat.

In the meantime, White Hats and the Earth Alliance have been busy not only making agreements, but building the infrastructure of our Star Trek Future, one in which humanity takes on the role of space pioneers, quickly expanding deep into our solar system. There is much to be optimistic about despite the uncertainties and grief during these painful times. You can read about many of the recent events in space I’ve been describing by visiting my website, where all my articles and podcasts are available for free.

If you are for an inspiring immersion into the latest space event, then I recommend you register for my webinar intensive, Our Star Trek Future, which will be held in three days—on September 11. In it, I’ll cover the fascinating history behind the Star Trek series as a real-life soft disclosure of a future timeline, and recent developments concerning the Artemis Accords, the significance of Combined Space Commands, the intervention of the Galactic Federation of Worlds, and fresh breaking intel about what’s happening right now in our solar system. Buckle up, this one will be a fast-paced, hope-filled ride.