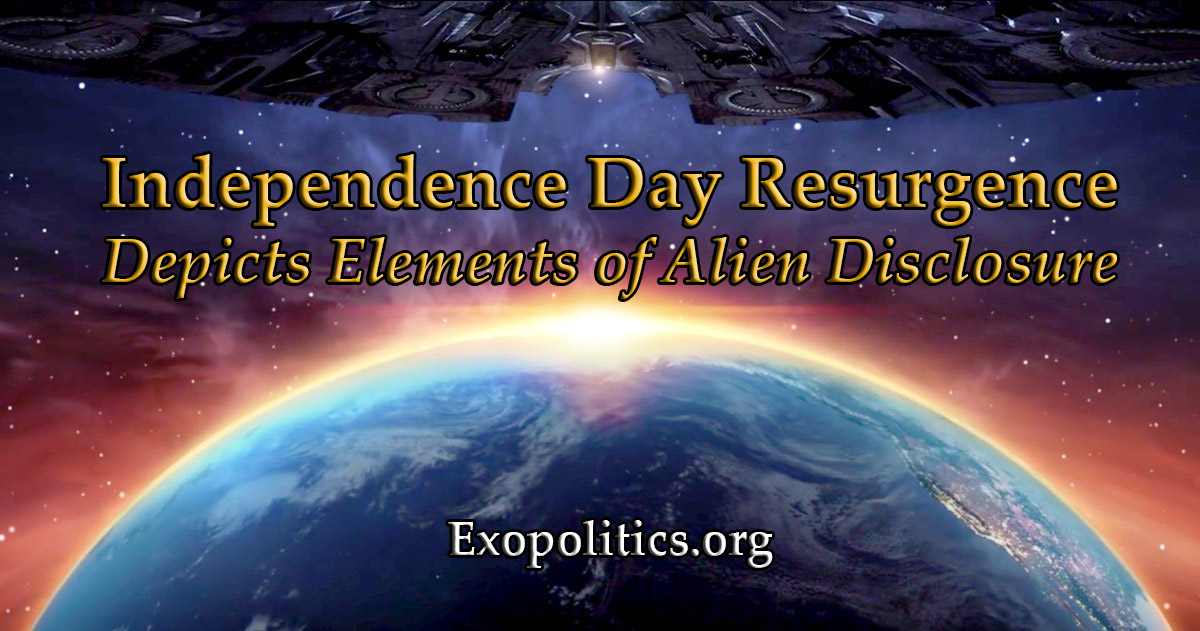 Written by Dr Michael Salla on May 5, 2016. Posted in exonews, world politics A commemorative video is now circulating to promote the upcoming June 20 release of the Independence Day sequel: Resurgence. There are key elements in the video, however, which suggest a “soft disclosure” agenda – preparing the public for official announcements of the existence of advanced antigravity spacecraft that can defend Earth against hypothetical alien threats.

The video pays tribute to the fictional 1996 attack by extraterrestrials on Earth depicted in the original Independence Day movie. The video lauds historic global efforts by nations to unify in forming a global defense force called “Earth Space Defense”, whose job is to defend Earth from future attacks.

Now 20 years later, a new extraterrestrial threat is emerging, but in the meantime Earth has created fleets of antigravity space fighters, a military base on the moon, killer satellites, and many other advanced weapons based on recovered alien technologies from the 1996 attack. Earth is apparently ready to defend against a renewed alien threat.

More significant is the commemorative video’s depiction of the Earth unifying in the 1990’s to form a coordinated global strategy for defending against an extraterrestrial threat. Of course this is a fictionalized version of world history that never officially occurred, but did something similar to these fictional events really happen behind the scenes?

It’s well known that President Ronald Reagan gave a speech at the United Nations in September 1987 calling for the world to unite in dealing with an alien threat. He said:

In our obsession with antagonisms of the moment, we often forget how much unites all the members of humanity. Perhaps we need some outside, universal threat to make us recognize this common bond. I occasionally think how quickly our differences worldwide would vanish if we were facing an alien threat from outside this world. And yet, I ask you, is not an alien force already among us?

Reagan then appeared to walk back his startling remarks by asking: “What could be more alien to the universal aspirations of our peoples than war and the threat of war?” Earlier and subsequent comments reveal that what he really meant by “alien force” was an extraterrestrial threat, rather than a more mundane reference to the danger of global war.

In 1995, he had asked the Soviet leader, Mikhail Gorbachev, whether he would pledge cooperation with the USA in responding to an extraterrestrial threat. In a 2009 interview, Gorbachev confirmed Reagan’s strange request during their 1995 Geneva Summit:

From the fireside house, President Reagan suddenly said to me, “What would you do if the United States were suddenly attacked by someone from outer space? Would you help us?”

Beginning in 1989, the Cold War came to a rapid end with the collapse of the Berlin Wall, and by December 1991, the Soviet Union was no more. President Yeltsin became the first President of the Russian Federation, which was now focused on rebuilding what was left of the crumbling economy of the largest republic from the former Soviet Union.

As far as the world knew, there was no link between the rapid collapse of communism in Europe, and Reagan’s efforts to get the world to unite in opposing an extraterrestrial threat.

However, according to secret space program whistleblower, Corey Goode, the United Nations did covertly come together to form what he has called a “Global Galactic League of Nations.”

In an email interview, Goode replied to a question concerning the relationship between the alleged “Global Galactic League of Nations” space program and the United Nations:

The beginning of this program coincides with a particular speech given to the U.N. by President Reagan that mentions how quickly we would come together if there was an alien threat.

The goal of this space alliance was to find defensive technologies that could protect the Earth against an undisclosed extraterrestrial threat.

Goode claims that interstellar space craft using antigravity technologies were built, which would seek out advanced technologies in other solar systems that could be used to defend the Earth.

He says that during his 20 year tour of duty (1987 – 2007) he visited a remote moon base belonging to this Galactic League of Nations that was located in another solar system. The moon base had scientists from all over the world working together to develop futuristic technologies to defend the Earth.

In the book, Insiders Reveal Secret Space Programs & Extraterrestrial Alliances, whistleblower testimonies and documents are examined which lend surprising support to Goode’s remarkable information. After the book’s publication, another piece of evidence emerged supporting Goode’s claim that key members of the United Nations were secretly negotiating a coordinated response to an “extraterrestrial threat” during the end of the Cold War.

In a November 21, 2015 lecture, veteran UFO researcher Dr. Steven Greer said that he had spoken with the Crown Prince of Lichtenstein, Hans-Adam, who had revealed to him a startling extraterrestrial disclosure plan being negotiated in 1989 at the United Nations. Prince Hans-Adam was participating in the high level negotiations involving Presidents Ronald Reagan and George H.W. Bush (who replaced Reagan on January 20, 1989), Mikhail Gorbachev (Secretary General of the USSR), along with other world leaders who were meeting with Perez de Cuellar, as the Cold War was coming to an end.

Greer said that the disclosure plan was aborted at the 11th hour on November 30, 1989, after Perez de Cuellar was involved in an abduction event where he was forcibly taken to a spacecraft and threatened by extraterrestrials. Greer explained what Prince Hans-Adam had told him:

He said what happened was that Perez de Cuellar … was coming back from a 3 am late night planning session for this event when he was abducted by aliens from his motorcade in Manhattan … Perez de Cuellar was taken somehow out of the motorcade onto an ET craft where he was threatened by the ETs and told: If you disclose this information, we will abduct every world leader involved, including the President of the United States.

Greer went on to say that the event was actually a staged abduction. It involved highly classified corporate programs using bioengineered “Programmed Life Forms” designed to look like real extraterrestrials.

Nevertheless, as far as key United Nations members were concerned, according to Prince Hans-Adam telling of the incident, the Earth was facing an alien threat that was among us, just as Reagan had warned in his 1987 speech. Adding another level of complexity to the 1989 abduction incident involving de Cuellar, is the Linda Napolitano UFO abduction case that occurred on the same night, and was extensively researched by Budd Hopkins in the book, Witnessed.

Hopkins claimed that he was able to get directly in touch with de Cuellar who privately confirmed that he had seen the Napolitano abduction. Hopkins says that he met with de Cuellar who insisted on keeping his involvement in the incident confidential, despite Hopkin’s repeated efforts to persuade him to go public.

The testimony of Prince Hans-Adam, as relayed by Greer, is supported to a significant extent by the impressive evidence accumulated in the Napolitano abduction case by Hopkins. The emerging conclusion is that a secret 1989 United Nations plan for extraterrestrial disclosure was aborted due to a threat the UN Secretary General Perez de Cuellar received.

The events surrounding de Cueller’s involvement in the November 1989 abduction incident confirms that major members of the United Nations were meeting at the time to coordinate a response to extraterrestrials who were perceived, genuinely or not, as a threat. Perhaps more significantly, global leaders believed – based on the abduction phenomenon – that hostile extraterrestrials were already among us.

This makes it plausible that the United Nations decided to cooperate in building an interstellar fleet in the 1990’s using classified technologies developed from crashed alien vehicles. The secret U.N. Space Fleet would travel to other star systems for help in defeating an extraterrestrial threat, part of which involved alien abductions on Earth, in what might be described as an interstellar SOS.

Consequently, there is significant evidence supporting Goode’s claim that the major nations of the world did come together in the 1990’s to form a unified scientific exploratory space fleet which would seek out defensive technologies for the Earth. Rather than an overt alien invasion as depicted in the original 1996 Independence Day, a covert alien invasion was underway as far as world leaders were aware. The events depicted in the commemorative Independence Day video are therefore not entirely fictional.

Major world leaders did indeed come together in the 1990’s to help protect the Earth from a hypothetical alien threat. This was done, however, covertly, rather than with public knowledge as depicted in Independence Day: Resurgence.

While Resurgence is likely to be another in another long line of Hollywood blockbusters depicting extraterrestrial life as an existential threat to humanity, there is an element of “soft disclosure” based on actual events in it as well.

Based on the preceding analysis, a remarkable conclusion emerges. The world public is being subconsciously conditioned, through fiction, to accept the reality of advanced fleets of antigravity spacecraft reverse engineered from crashed alien craft, futuristic space weapons, and a unified global space command secretly established in the 1990’s under the auspices of the United Nations.