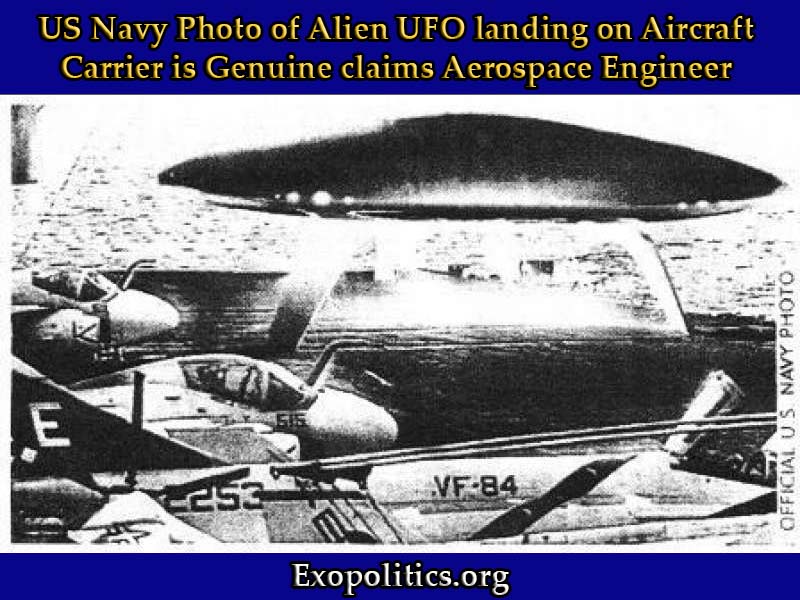 Written by Dr Michael Salla on May 11, 2016. Posted in Space Programs

An alleged photo of a flying saucer landing on the flight deck of an aircraft carrier is genuine, according to William Tompkins, a retired aerospace engineer who had a four decade career with leading U.S. corporations up until 1984.

Tompkins career began with service as a Naval Intelligence operative, from 1942 to 1946, where he provided intelligence briefings to select U.S. aerospace corporations about antigravity spacecraft being secretly developed in Nazi Germany.He has supplied several documents supporting his claims that he was assigned such a covert mission and operated out of Naval Air Station, San Diego.

Tompkins discussed the photo in a radio interview on May 4, and claimed that it was taken from one of what were regular incidents on U.S. Navy aircraft carriers – landings by friendly “Nordic extraterrestrial UFOs”:

It’s one of quite a number of Nordic extraterrestrial UFOs that have landed on US Navy aircraft carriers. And what you’re looking at . . . You’re looking at it from the bottom of the bridge of the carrier because those older ones were much further forward than the photographs you’ve got later on.

Tompkins explains how the extraterrestrial craft would land, and transport the admiral of the naval battle group up to the mothership in space to hold discussions with commanders of a “Nordic Space Navy”.

It’s a long story. They came from one of their starships. So they came down to talk to the admiral that’s the commander on that particular battle group. And they did their other program and their meetings and our admiral left with the captain taking over the ship and some other people and they took off in that vehicle and they went back out to the mothership. And, of course, they brought them back later.

Tompkins emphasized the regularity of such landings due to the small chance they could be witnessed while the ships were at sea:

Like I’m just saying, there’s a whole story of all of these . . . because . . . The UFOs landed on our aircraft carriers many times. Okay? It’s nice because nobody can see them doing it.

On the right side of the photo are the words “Official U.S. Navy Photo” suggesting that someone linked to the Navy had arranged for its release into the public arena.

Another one of the May 4 radio guests, Frank Chille, described how he got first got a copy of the photo, and what he knew about it belonging to the U.S. Navy:

There’s a little bit of a side story on the disk that landed on the aircraft carrier. Believe it or not, that original photograph was shown to me by Graham Bethune more than 15 years ago… And I held it in my hands. He allowed me to make a copy of it. It was on very think paper and on the flip side it said, “U.S. Navy, top-secret, eyes only, 1955”.

Graham Bethune was a U.S. Navy Commander, now deceased, who had after his retirement, released some of the most famous photographs in UFOlogy. His photographs from the 1989 Nashville, Tennessee sighting, for example, are among the best ever released of actual flying saucer craft.

Bethune gained access to many Navy photographs during his distinguished military career which included 12 years as “VIP Transport Plane Commander” and six years with the Naval Bureau of Aeronautics.

He subsequently worked for years to help disclose UFO related information, and there is no reason to believe he would fabricate the photo of a UFO landing on an aircraft carrier.

Chille described the circumstances under which Bethune allowed him to make a copy 15 years ago, and what happened when he first shared it with Tompkins in May 2016:

And Graham always had some incredible photographs, but he let me make a photograph of that, but he never told me the background on it. When I told Bill [Tompkins] about it, he said, “Frank.” He says, “can you get the photograph to me?” He says, “I think I know the story behind it.” And he got the photograph today and he said this dovetails right into his book, starting on page two.

On pages two to three of his book, Selected by Extraterrestrials, which was published in December 2015, Tompkins describes an incident very similar to that depicted in the photo.

In the May 4 radio interview, Tompkins confirmed that the photo was of the USS Coral Sea (CV-43), similar to what he had described in Selected by Extraterrestrials, prior to him seeing Bethune’s photo:

Actually, the aircraft you’re seeing there on the flight deck, those are A-6s, which are an attack-type of aircraft… And that ship is the USS Coral Sea.

The Grumman A-6 Intruder fighter aircraft came into Naval service in 1963, which suggests the photo was taken on or after 1963. The 1955 date Chille recalled on the back of the photo, as an astute reader pointed out in a comment to an earlier version of this article, “would not refer to the date of the photo, but would refer to the date of the classification guide which established the level of the document being stamped.”

Tompkins confirmation that the photo released by Commander Bethune to Chille is genuine is highly significant. It reveals that the U.S. Navy was actively cooperating with a Nordic extraterrestrial race as early as 1963.

Furthermore, Tompkins claims that during his work from 1951 to 1963 at a secretive think tank at Douglas Aircraft Company called Advanced Design, he was being assisted by two Nordic female extraterrestrials who were posing as ordinary secretaries. They were covertly assisting him in designing kilometer long space craft that would be later built for the Solar Warden space program in the 1980’s.

Consequently, during the decades it took for the design and construction of secret space battle groups, it appears that the U.S. Navy was working closely in gathering intelligence on the operations and missions of Nordic extraterrestrial space battle groups.

Tompkins also says that the Nordics were in locked in a galaxy wide conflict with Reptilian extraterrestrials, who had allied themselves with Nazi Germany during World War II, and assisted the Germans in building a secret space program in Antarctica.

The photo of a flying saucer landing on an aircraft carrier, if based on a genuine incident, would be hard evidence that the U.S. Navy has since the 1960’s, been actively cooperating with a group of friendly “Nordic” extraterrestrials which had identified the Navy as allies in a wider galactic conflict.

[Update 5/1916 – Further research has shown the flying saucer landing on aircraft carrier photo is a doctored version of an April 1975 photo of the USS Roosevelt. While the photo is doctored, it may be based on a genuine incident. More details here. Article has been revised accordingly.]

[Update 5/13/16 – A reader has provided a comment that answers the apparent discrepancy between the date on the back of the photo (1955) and the naval service of the A-6 aircraft (1963-1997). The date refers to the Navy classification guide used to classify the photo, not when the photo was taken. Article has been revised accordingly.]