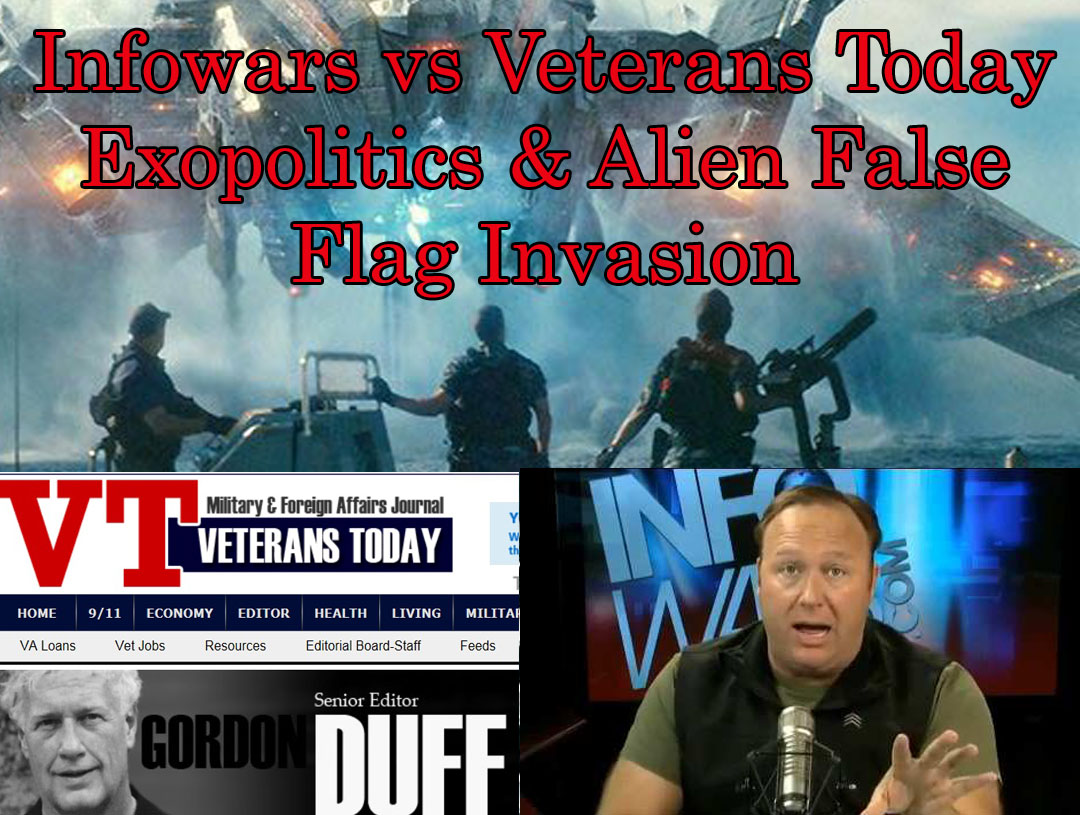 Popular alternative news websites Infowars.com and VeteransToday.com are officially at war. They have traded increasingly critical articles or videos against their respective flagship icons – Alex Jones and Gordon Duff. According to a Feb 19 article from Duff’s Veterans Today, Jones is part of the controlled opposition run by the Mossad and international Zionist bankers.  Duff and his writers quote Jones himself in his uncritical support for Israel and Zionism found in an old radio broadcast.  According to Infowars’ Paul Watson, Duff and Veteran’s Today is a disinformation site citing Duff’s own admission where as much of 40% of what he says is necessarily disinformation to protect himself and his sources.

Supporters of both sides make their respective claims both pro and con of one another’s positions and writers. Rather than simply jump into the fray on behalf of one side or the other, I thought it worthwhile to assess their responses to the exopolitics factor. If exopolitics – an internationally orchestrated cover up of extraterrestrial life and technology – is the biggest secret underlying how the world is run, that would give us a means of assessing whether Infowars or Veterans Today is putting out more of the truth of what is really happening behind the scenes in respect to false flag events.

As far as Alex Jones is concerned, extraterrestrial life is something he believes to exist somewhere in the galaxy, but claims there is no concrete evidence of a government cover up. Jones instead says that an alien false flag operation has been prepared, and commented about this in a May 2009 interview on Coast to Coast Radio.

Jones also claims that a belief in extraterrestrial progenitors as illustrated in the movie Prometheus is a key article of faith for the ‘Illuminati’ which comprises the international banking elite.

The film Prometheus is completely constructed around the secret religion of the Illuminati who believe they are transcendent and becoming the superman… The Illuminati believe they have stolen the fire of true genius from the gods.

In earlier articles, I’ve written about Jones’ problem when it comes to the issue of extraterrestrial life and a high level government cover up.  I have concluded that Jones position is driven by his belief that publicly accepting core premises of exopolitics would undermine his support base. So far, I have to give Jones a bare pass on the exopolitics factor insofar as he chose pragmatism over the truth of his convictions.

This now takes me to the issues of Jones silence on the Mossad and international Zionism that he has been criticized for by Duff as well as many others.

James Jesus Angleton who was the head of Counterintelligence (CI) for the CIA from 1954 to 1975, was the go-to person for the MJ-12 Special Studies Group initially set up to run the extraterrestrial cover up. In addition to his responsibility as CI chief, Angleton also ran the Vatican and Israel desks.  The intelligence service of the Vatican, the world’s oldest and largest, is run by a secretive Jesuit dominated organization S.I.V.  In contrast, Israel’s Mossad, is the youngest and smallest, but probably the most ruthless of the world’s major intelligence services. If you don’t believe so, then I recommend reading Victor Ostrovsky’s By Way of Deception for details.

Both the S.I.V. and the Mossad were essential for the success of Angleton’s covert operations at the apex of which stood the JKF assassination. Basically, the CIA’s CI, the Vatican’s S.I.V. and Israel’s Mossad are the unholy trinity when it came to keeping secret that our world is being visited by extraterrestrial life.

Jones’ focus on the international banking cartel as behind most of the false flag operations and evils facing our world correctly identifies a key factor in the manipulation of world governments. In doing so, Jones has some justification in not exclusively focusing on a sub-group such as Zionist bankers, when there are many other large banking cartels that have little to do with international Zionism.

The key role of the Mossad in the unholy trinity performing covert operations authorized by the MJ-12 Group (as originally known) is another matter. When it comes to Jones silence on the role of the Mossad when it comes to false flag events generally, and exopolitics issues in particular, his critics are correct to point out the disturbing conclusions that might be drawn.

As far as Duff is concerned, he has made quite a number of statements about extraterrestrial life both on air and in articles. He claims to have briefly served with the ultimate controllers of extraterrestrial information, MJ-12, and has many contacts with many intelligence insiders regarding extraterrestrial related projects. Among Duff’s claims is that both Mossad and an international Zionist bankers are key players in the extraterrestrial cover-up.

Duff made a lot of waves in Sept 2012 with his claims that hostile extraterrestrials were battling both US and Chinese forces in the Pacific, as exemplified in the move Battleship:

Duff’s writings and claims about extraterrestrials basically frames them as a global threat that requires a military response. He is ably supported in his claims by Preston James who on Feb 19 wrote the 19th installment in a series of articles about hostile aliens and their threat to humanity.

In response to Duff’s (and James) position, I would point to extensive testimonial evidence that extraterrestrial life forms a spectrum of the good, the bad and the indifferent.  While the international controllers have struck deals with those aliens that don’t hold humanity’s best interests at heart, those that do have been playing a mitigating role.

As far as the Mossad is concerned, Duff is correct of its key role in the secretive world of exopolitics. The Mossad, along with the CIA’s CI and the Vatican’s S.I.V., is essential to covert operations authorized by the successor to the MJ-12 Group which is allegedly called Scion today.

While Duff is correct that a high level cover up of alien life and technology exists, and that the Mossad and international Zionism play key roles, there is quite a lot of disinformation woven in that can prove very disastrous in setting future policy on extraterrestrial life. So I have to give Veterans Today a bare pass on its inclusion of the exopolitics factor.

The disinformation that Duff weaves into his exopolitical analyses, does raise the very real possibility that it could be used to justify an alien false flag operation. I find it ironic that this is precisely what Jones is most concerned about in his more limited exopolitical analysis based on the ‘non-existence’ of visiting extraterrestrials as he claims. While Jones is silent about the role of Mossad in false flag operations generally, Duff is silent about the possibility of an alien false flag operation in particular that could be used for setting official policy on how to respond to extraterrestrial visitors.

Both Infowars and Veterans Today have done admirable work over the years in exposing false flag operations. When it comes to an alien false flag operation, that’s where Duff and Veterans Today seem to have a blind spot.  Jones is correct that such a possibility exists and it’s important to educate people to the possibility that it could be used to significantly increase levels of government surveillance and control.

Yet Jones has his own blind spot when it comes to the key role of the Mossad in the Unholy Trinity of intelligence agencies at the core of the extraterrestrial cover-up. Duff, James and others are right to castigate Jones on his silence over the Mossad in false flag operations.

Exopolitics is a very helpful way of evaluating how well public figures, websites and the alternative media are doing in revealing the deepest truths behind how our world is being secretly run to prevent the release of revolutionary information concerning extraterrestrial life and technology. The need to guard against impending ‘alien’ false flag operation is as important as exposing all the actors responsible for past false flag operations. On that score, Duff, Jones and co., have much to learn from each other.