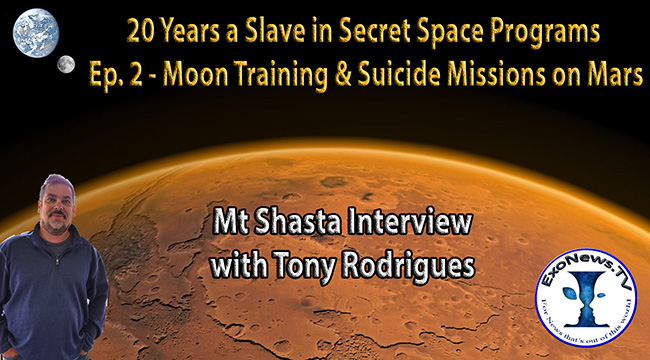 In this second episode of an interview with Tony Rodrigues conducted at Mt Shasta on August 29, we continue to learn critical information about how personnel are treated in secret space programs. Rodrigues says that he completed a 20 and back program from 1981 to 2001 in a number of covert programs including service with the least known of the programs, what has been called the “Dark Fleet”.

Unlike prior participants of secret space programs who have come forward, Michael Relfe, Randy Cramer and Corey Goode, Rodrigues did not undergo a formal military induction process where he signed recruitment papers outlining the terms of his service, and the process by which he would be returned to civilian life.

Instead, Rodrigues was forced into service as a slave where he had no rights, and had to do whatever his superiors desired, as exemplified in the first episode where he was used as a drug courier and then as a sex slave.

In this episode, Rodrigues resumes his story after a three year period in Seattle, where in 1988, at age 16, he was again taken to the Moon, and given rudimentary training as a slave soldier who would be expected to perform suicide missions against insectoid and other extraterrestrial species.

The advanced healing technologies in these programs allowed for seriously injured slave soldiers to be rapidly healed so they could perform multiple missions.

After his short training on the Moon, Rodrigues was taken to Mars where he was expected to conduct suicide missions which would support regular Mars super soldiers in their battles with insectoids and other indigenous races.

In the following interview segment, Rodrigues describes his trip to the Moon and training there, before being taken to Mars to perform what amounted to suicide missions.

Click here for Part 1 of this series of interviews