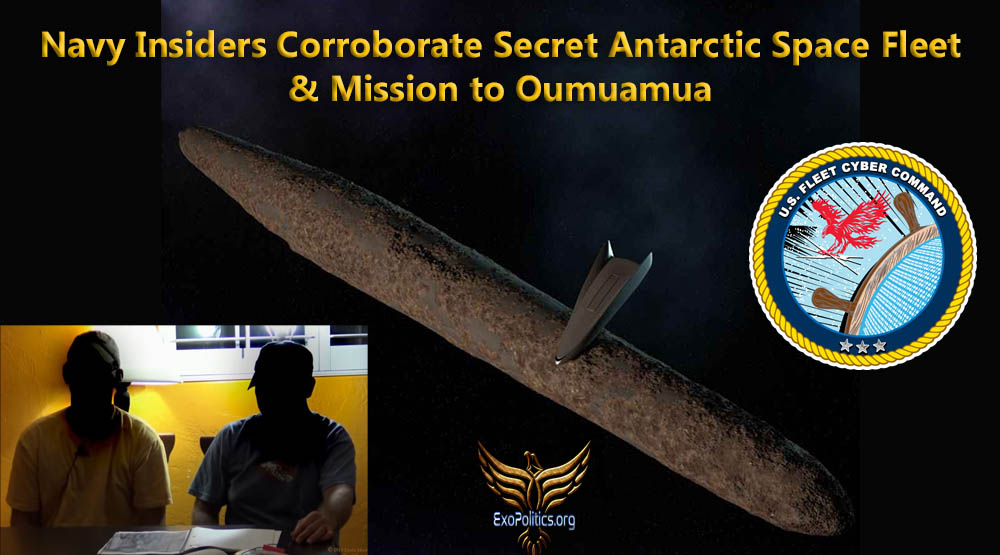 A former Navy Seal and a Marine Corps special operator have just revealed in an interview their knowledge of a secret space fleet that operates out of Antarctica, which flew a landing mission to the recent interstellar visitor to our solar system, Oumuamua. They were interviewed by veteran UFO researcher Linda Moulton Howe who released their startling testimonies on her YouTube channel live streaming on February 20, 2019.

Howe had previously released Part 1 of her interview where Spartan 1, a former Navy Seal, described entering an octagon shaped structure covering approximately 62 acres near the Beardsmore Glacier in Antarctica. His account of what he witnessed and his mission there is described in my earlier article.

Spartan 1 had also shared his knowledge of the existence of a coalition of major nations that are signatories to the Antarctic Treaty, who operate a secret space program out of Antarctica.

This coalition that I talk about, it’s Great Britain, United States, France, Germany, Canada, Russia. There has been a space fleet in existence for the last 25 years” [Timestamp 9:01]

In response to Howe’s question about who is paying for and operating the space fleet, Spartan 1 asserted: “All these coalition countries”.

Spartan 1 went on to describe the different extraterrestrial races that collaborate with the space coalition and how Antarctica is the hub of operations:

Spartan 1:  I have only been told about of at least seven different species of aliens that the coalition has been in contact with.

Howe: How have they been described?

Howe: Do you have the impression that Antarctica is the central crossing hub for these seven species?

Next, Howe introduced the second whistleblower, Spartan 2, who is also a special operator, but whose service branch was instead the US Marine Corps. Spartan 2 first contacted Howe on March 22, 2017 by email and wrote: “Antarctica contains wonders beyond what most can comprehend. It has ties to space and technology beyond belief”. [Timestamp 22:06]

He revealed that for the last decade he has worked with an official from U.S. Cyber Command, whose 8th floor office is responsible for conducting trade with extraterrestrial races. The official, whose first name is Kim, told Spartan 1 and 2 about a secret mission to Oumuamua – the interstellar object that sparked scientific speculation due to its unusual cigar shape and how it accelerated as it began leaving our solar system, which Howe discussed in her live streaming session.

Spartan 2 then dropped a bombshell when he said:

In response to Howe’s question of who gave them their information, Spartan 1 disclosed:

“I can only tell you his first name is Kim, he worked for NSA, has worked for NSA for years. Then, just recently, in the last year he has been put in charge of a certain department in Cyber Command. All I know is that it’s on the 8th floor of the NSA building” [Timestamp 25:30]

Spartan 1 confirmed that the 8th floor of Cyber Command is like a communications department in charge of interstellar trade with extraterrestrials.

The revelations by Spartan 1 and 2 about the secret space mission to Oumuamua before its “official discovery” on October 19, 2017 corroborates an earlier account of this mission by secret space program insider Corey Goode. Goode says that on December 17, 2017, he was taken to a secret moon base called Lunar Operations Command where he received a briefing about the Oumuamua mission involving an alliance of space programs and nations.

Goode asserted that during the briefing he viewed a video of the Oumuamua mission, and that it was led by a senior USAF official he had dubbed “Sigmund”. Goode said:

Sigmund puffed up proudly and stated, “I led an expedition to see who this craft belonged to. Wait until you hear what we found.” Suddenly we started seeing all sorts of readings and telemetry on the monitor. I could also hear what sounded like an old NASA radio transmission. There were beeps along with a pilot calling in positions of his craft, as well as the one he was trying to dock with. That lasted for about five minutes as I saw the two craft spiraling closer and closer together.

As the pilot matched the spin of the object they were approaching, you could see a long cigar-shaped structure that had shiny patches of what looked like ice on the outside. It was obviously made of stone, and looked as if it had been through many meteor showers and collisions. The video broke to a scene where a few people who were suited up in space suits were pushing themselves through what looked like a bored-out hole going down into the rock.

More information about what Goode was told about the secret Oumuamua mission is available here. Significantly, key elements of what Goode was told and publicly revealed back in January 2018 about the Oumuamua mission have now been independently corroborated by the two new whistleblowers, Spartan 1 and 2. This means that there are three individuals who have now gone on the public record about receiving first hand testimony of a classified mission to Oumuamua by a coalition of nations controlling a secret space fleet.

Goode has also spoken in the past about Antarctica being a hub for deep space operations by different groups, nations, and corporations, which is consistent with what Spartan 1 and 2 have revealed.

Goode has also described the creation of an international space fleet created in the early 1990’s that focuses on scientific research in deep space and other solar systems, which he dubbed the “Global Galactic League of Nations.” Again, this is consistent with what Spartan 1 and 2 have just revealed.

Howe has conducted due diligence on her two new whistleblowers in terms of reviewing documents confirming their military service. This makes their respective testimonies about Antarctica and Oumuamua difficult to dismiss, thereby corroborating what Goode had revealed more than a year earlier about the secret mission to Oumuamua.