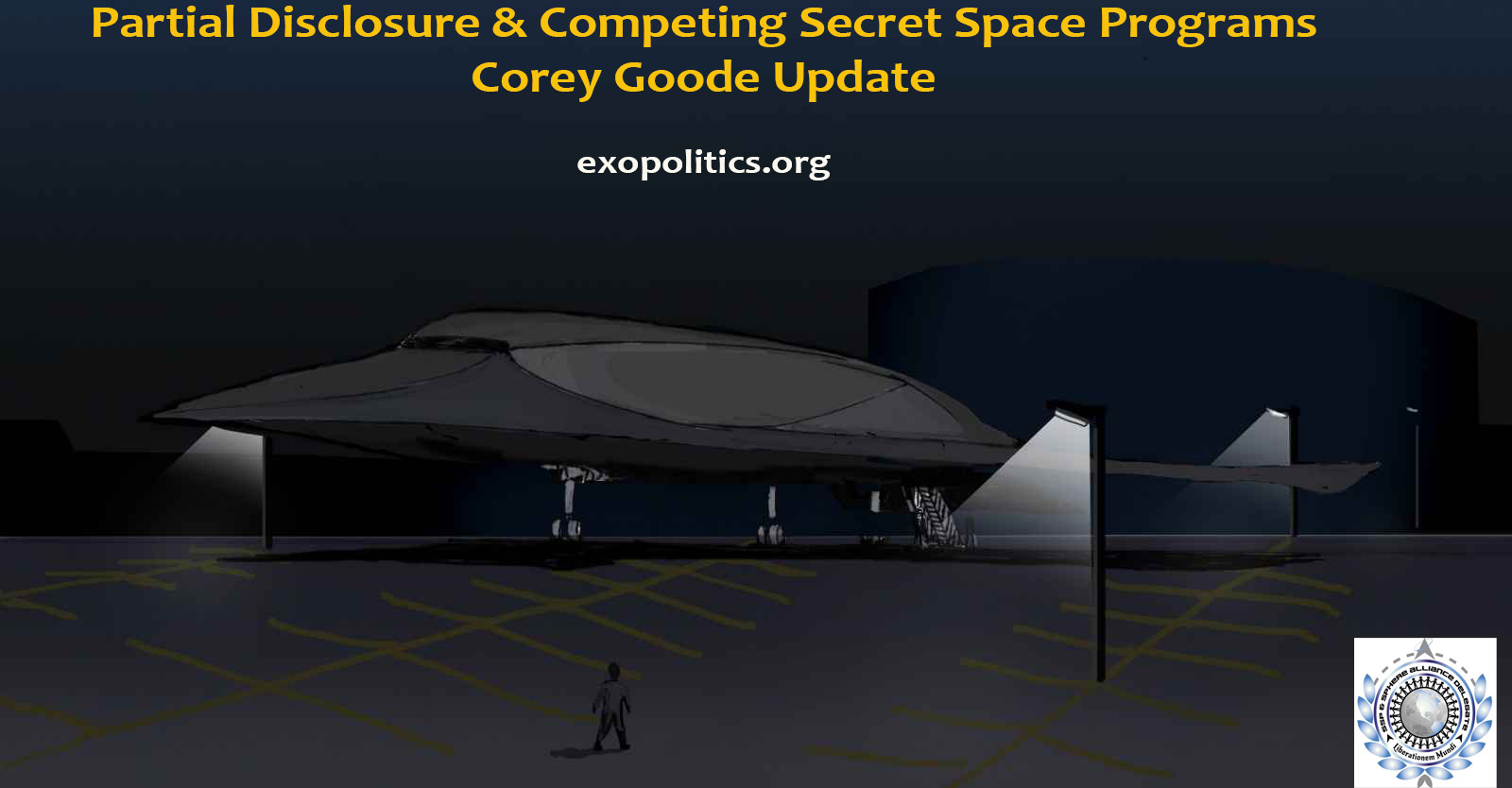 A secret space program run by the U.S. Air Force with the support of the National Security Agency, Defense Intelligence Agency and the National Reconnaissance Office, has concluded that Corey Goode’s testimony of multiple secret space programs with interstellar spacecraft using temporal drive technologies is not disinformation. This is among the most recent claims of Goode in a December 11 update about information he recently acquired as a result of his abduction and interrogation by what he describes as a Military Industrial Complex Secret Space Program (MIC-SSP) comprising the above U.S. military intelligence entities.

In a previous abduction incident in late September, Goode described a senior USAF officer in charge of his chemical interrogation who told Goode that they believed he was spreading disinformation from a rogue Special Access Program.

On October 26, Goode was abducted for a third time by this MIC-SSP, which he states is not advanced as the U.S. Navy’s “Solar Warden”,  and other secret space programs he has previously described in interviews and reports.

He claims that the senior USAF officer in charge of the vehicle he was taken to, which he dubbed “Sigmund”, revealed that analysis of data from the two prior abductions has led to the conclusion that Goode is telling the truth after all.

Sigmund said that the tests first confirmed a key aspect of Goode’s testimony, which is that he has traveled to off planet locations:

The lab results once again confirmed that I had been in the approximate off-planet locations I had claimed. The MIC space program people do not have any intelligence suggesting I had ever actually visited these locations. I was never a part of their program.

This led to the Sigmund concluding that he was being deliberately misled by his superiors about the existence of more advanced programs to his own:

My tests proved, beyond any shadow of doubt, that there was much more to the secret space program than he knew.

As a high-ranking superior officer, this naturally came as quite a shock to him. He was led to believe that he had access to all relevant compartments of the UFO cover-up.

Goode describes how it is possible that a USAF space program would not be aware of other secret space programs, including the Navy’s Solar Warden, despite having craft capable of interplanetary travel in our solar system:

The above descriptions suggest something similar to a 1952 design by Dr. Werner Von Braun. Goode continued to describe other technologies belonging to the MIC SSP:

They are also reported to possess floating aircraft carriers that look exactly the same as what we saw in The Avengers and Captain America: The Winter Soldier.

They have craft that can travel around our solar system, as well as other stealth-looking varieties. This technology makes them feel that if anything else was going on in our solar system, they would be able to see it.

When they see the crafts from other programs, or of any of a number of ET races, they are simply told that these are ours. They are told that they are not on a need-to-know basis about that particular program and not to speak about their sighting with anyone….

The MIC SSP are told that we cannot travel outside our solar system… This is due to gravitational and energetic conditions at the boundary of our heliosphere that any escape impossible with their current technology.

This helps confirm that advanced antigravity craft are revealed through movies such as Captain America: The Winter Soldier in a “soft disclosure” process.

They believe that any ETs have long since come and gone from our solar system, other than time travelers from Earth’s own future who have developed the technology to come back and visit us.

They believe that some of these future humans now look like Grays due to evolutionary changes from living underground for thousands of years.

Goode recalled a conversation he had with “Gonzales” (a pseudonym used by a liaison to the Secret Space Program Alliance), who describes the reason why there was no attempt to stop Goode being abducted by MIC SSP:

Gonzales stated that he was sorry he couldn’t share some of the details before about why I was being abducted and interrogated. He stated that this was part of an operation that was seeding information into the ranks of this MIC SSP.

Apparently many of them are disillusioned and questioning whether or not they were indeed at the top of the intelligence totem pole as they had been led to believe….

These individuals were now in a state of mind that led many of them to believe that there was much more going on in “the programs” than they had been led to believe. Gonzales revealed that allowing Sigmund to extract the information from Goode about the Solar Warden and other SSPs would lead to Sigmund changing his view that Goode, Gonzales and others were part of an Unacknowledged Special Access Program that had gone rogue and was releasing classified information. This had led to Sigmund and the MIC-SSP hunting operatives of the Secret Space Program Alliance (such as Gonzales) for interrogation:

Sigmund was causing a LOT of problems for the SSP Alliance. He was hunting them down as traitors, pretty much. Once he got this recent info from me, he then turned and has been asking a lot of angry questions from his superiors. So that mission seems to be accomplished for now.

Goode’s information here is very significant since it shows how overly compartmentalized the world of unacknowledged Special Access Programs is, where one compartment is not informed about another, even though they are both performing deep space operations.

Importantly, Goode added that his interrogations would have a beneficial in terms of plans for partial disclosure:

He [Gonzales] stated that if this information gets to the right people within the MIC SSP it could hinder the wider plans of doing a partial disclosure of their program.

It has been confirmed through Wikileaks that a partial UFO disclosure initiative was being prepared through rock Star Tom DeLonge, who is being helped by two retired USAF Generals along with senior corporate officials such as the head of Lockheed Martin’s Skunkworks. The plan was to release information about the USAF/DIA/NSA/NRO space program with Earth orbiting space stations and antigravity TR-3B spacecraft capable of limited interplanetary operations.

Partial disclosure would be designed to hide the existence of more advanced space programs that use interstellar technologies with temporal drives, and have been implicated in various abuses including human slave trade in space. Partial disclosure would essentially be a “limited hangout” operation to hide the truth by revealing the existence of the less advanced USAF secret space program.

Goode and the Secret Space Program Alliance has been advocating “full disclosure” of all programs and of extraterrestrial life since late 2014. It appears that his military abductions have led to key leaders in the USAF secret space program finally learning the truth about themselves being deceived about the full scope of what is happening in space. This will add to the pressure for full disclosure, and limit the prospects of a limited disclosure narrative being implemented.