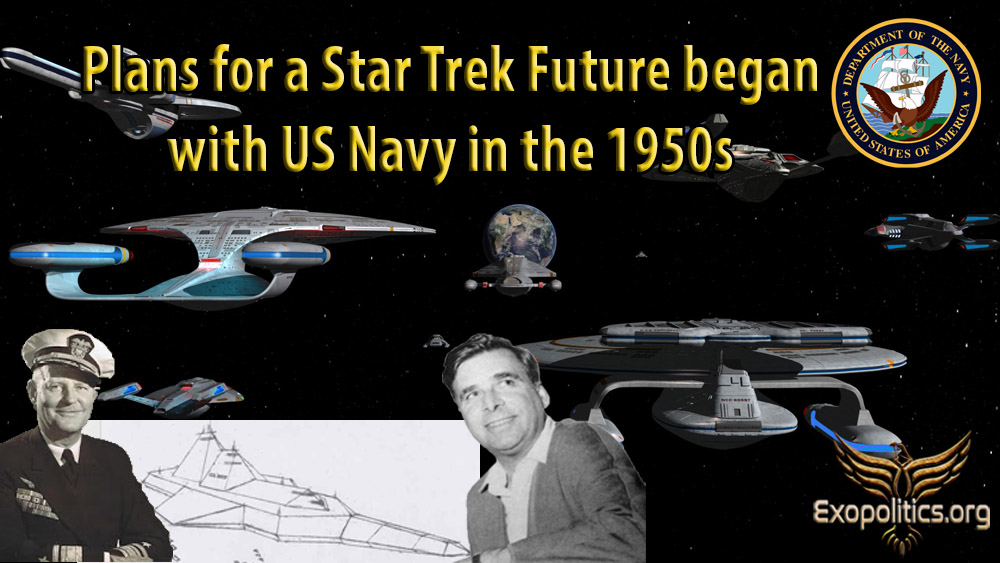 Exopolitics Today Podcast identifying the history, planning and creation of a Star Trek Future that secretly dates back to the 1950s, and is most recently revealed in the recommendations of a 2019 Space Futures Workshop. The creation of a multinational space alliance, the Artemis Accords, intervention by the Galactic Federation of Worlds, and an unknown Temporal War involving the Earth, Moon and Mars are among some of the recent space developments relevant to an unfolding Star Trek future for humanity.

In March 2019, US Air Force Space Command organized a “Space Futures Workshop” that examined eight scenarios of what would happen in space over the next forty years. Each scenario was evaluated in terms of its civil, commercial, and military impact on Earth and in space.

Sixty experts from multiple national space programs, aerospace corporations, and military organizations from around the world attended the workshop. Of the eight scenarios, the experts chose a “Star Trek Future” as the optimal outcome that humanity should strive to achieve by the year 2060.

It’s no accident that a Star Trek Future is being actively pursued by the US military and its major allies for future space operations. Most assume Gene Rodenberry created his Star Trek TV series as a work of fiction in 1966. The truth is much more startling.

We also know, thanks to insiders such as William Tompkins who worked at Douglas Aircraft Company from 1950 to 1963, that the Galactic Federation was secretly helping the Navy design and build future fleets of interstellar capable space carriers, destroyers, and support craft.

Today, the eight fleets of Navy space battle groups are widely known as Solar Warden, and are led by cigar-shaped space carriers. One of the space carriers was seen by British computer hacker Gary McKinnon in 2002.

The relationship between the US Navy and the Galactic Federation of Worlds has become so close that the next generation of space carriers due for release in the 2030s, is being built nowhere on Earth, but in the space docks of a planet in another solar system, according to Tompkins.

Behind the scenes, US Navy admirals played a vital role in seeding the idea of a Star Trek Future in Hollywood as part of a long-term psychological operation to prepare humanity for their optimal future.

It was the son of Vice Admiral Leslie Stevens III, who headed the Navy’s psychological operations division, that recruited Rodenberry into the Navy’s plans to use Hollywood to shape public expectations of the future.

Leslie Stevens IV, the creator of the Outer Limits TV series, which revealed many breakthrough technologies gained from reverse engineering of extraterrestrial spacecraft, briefed Rodenberry about the future Navy space program, and its collaboration with the Galactic Federation.

With the publication of the March 2019 Space Futures Workshop, all is set for plans to create a Star Trek Future moving into high gear.

This requires the creation of a unified political military command in space – something very similar to Rodenberry’s Starfleet. The future Starfleet would offer military protection for commercial and civil space activities.

The rebooting of US Space Command in August 2019 and the creation of Space Force as a new military service four months later were critical steps towards the creation of this Star Trek Future.

In addition, in October 2020 the Artemis Accords were signed making it possible for a multinational space alliance to be created with the US at its core. Since the launch of the Artemis Accords between the US and eight other countries, four more spacefaring nations have signed on.

This has made the Artemis Accords the most popular international agreement for regulating the behavior of spacefaring nations in our solar system.

In 2021, the United Kingdom, Germany, Italy, and Australia authorized the creation of Space Commands within their respective militaries, and all planned to closely coordinate with the US Space Command.

In the meantime, an attempt by Russia and China to set up their own multinational space alliance through a joint lunar research station has failed to gain international support.

All these developments, most of which occurred during the Presidential administration of Donald Trump, occurred with the guidance of the Galactic Federation, according to Prof Haim Eshed, the father of Israel’s space program.

Finally, in July 2021, the Galactic Federation (of Worlds) held a series of meetings near Jupiter with representatives from 14 of Earth’s major space faring nations to discuss the future of our solar system.

The meetings were a result of the looming military defeat of negative extraterrestrial races, the Dark Fleet and the Deep State in controlling the Earth, Moon, Mars, and the rest of our solar system. This made the Jupiter meetings functionally similar to the 1945 Yalta Conference that occurred three months before the collapse of Nazi Germany.

Key aspects of the Jupiter meetings coincide with what is known about the growing popularity of the Artemis Accords among space faring nations, and the failure of the China-Russia Moon base initiative in attracting international support.

The result of the Jupiter meetings is that a comprehensive international framework now exists for the creation of a Star Trek Future.

To learn more about the Jupiter Meetings visit exopolitics.org for a series of free articles and interviews discussing them.

To learn more about these and other exciting new developments, join me for my all-new webinar, “Our Star Trek Future” on September 11, 2021.

This has been Dr Michael Salla with Exopolitics Today