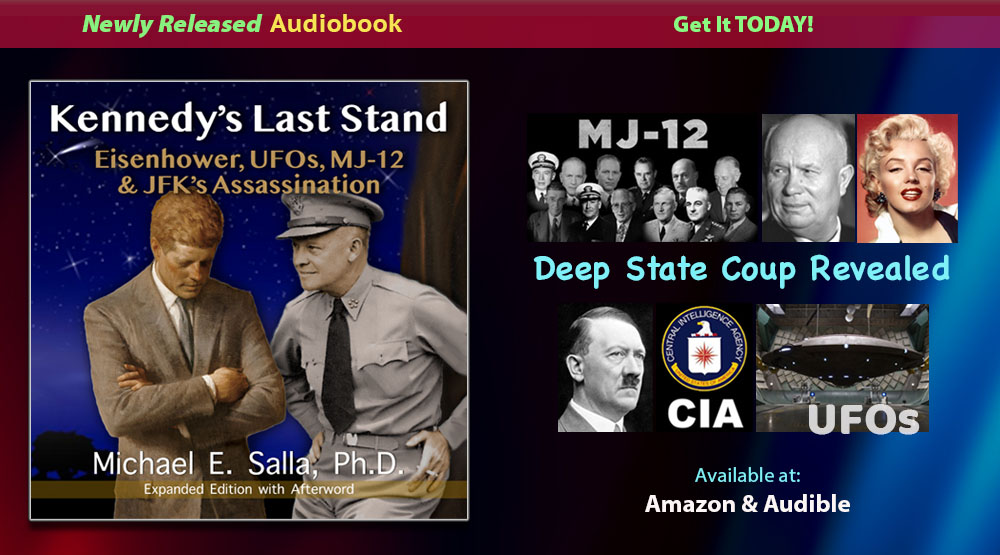 I am delighted to announce that Kennedy’s Last Stand: UFOs, MJ-12 & JFK’s Assassination has just been released as an audible book. This book explains how Kennedy acquired a deep knowledge of UFOs (aka flying saucers) and their origins during his military service for the Office of Naval Intelligence in 1942, and his subsequent travel to Occupied Germany in July 1945 as a guest of Secretary of the US Navy James Forrestal.

Forrestal went on to become a founding member of the MJ-12 Special Studies Group, which was set up in September 1947 to oversee research and development of the flying saucer issue as it was then known.

As a member of Congress and personal friend of Forrestal, who became the first Secretary of Defense in September 1947, Kennedy learned a great deal about a research and development program that had been set up for captured UFOs, some of which were extraterrestrial in origin. Other craft were German and demonstrated how close Nazi Germany had come to successfully weaponizing these for the war effort.

After Forrestal was “suicided” (assassinated) in May 1949, Kennedy was cut out of the loop of information for more than a decade. After he was elected President in November 1960, he was warned by President Eisenhower how powerful and dangerous the MJ-12 Group had become. Eisenhower privately shared advice on how best to gain access to the necessary information.

As President, Kennedy began a number of efforts to learn about MJ-12 operations and what was occurring within the classified reverse engineering programs underway at top secret facilities, especially those controlled by the CIA such as Area 51. He was blocked at every turn by MJ-12 operatives, especially his first CIA Director, Allen Dulles.

It was only after Kennedy had finally reached an agreement on November 11, 1963, with Nikita Khrushchev on joint US Soviet space and moon missions that he had finally achieved a means of forcing MJ-12 and the CIA to share the necessary UFO information with other branches of the US government.

Kennedy’s Last Stand provides extensive documentation and witness testimony explaining the different stages in Kennedy’s efforts to gain access to classified UFO files, and the threat he posed to the MJ-12 Group. The book concludes that Kennedy’s assassination was not a result of a crazed lone gunman, but was the outcome of a well-crafted international conspiracy involving the MJ-12 Group and the CIA’s Counter-Intelligence division, led at the time by James Jesus Angleton.

The newly released audible edition contains an Afterword that updates the earlier 2013 paperback and kindle editions using declassified Kennedy assassination files released by the National Archives in 2017 and 2018. The declassified files confirm that two US army communications experts had tried to warn Kennedy about the international conspiracy but had been silenced by superiors.

In addition, the declassified files point to a German 4th Reich connection to Kennedy’s 1960 election victory, and his subsequent assassination.

What needs to be emphasized is that the Kennedy Assassination marked a coup by the MJ-12 Group, which was affiliated with the CIA and the US Military Industrial Complex, which Eisenhower had warned about. According to multiple sources, the MJ-12 Group was internationalized in 1969. As a result, the US Republic became firmly controlled by a Deep State comprising both US and international figures. The Kennedy Assassination was the key to making this transition possible.

It is more than coincidental that the Audible edition of Kennedy’s Last Stand has been released on January 5, 2021, only one day before the massive Washington DC rally protesting the alleged outcome of the 2020 election. Once again, the Deep State is orchestrating a coup, this time through a stolen election.

There are powerful parallels between Donald Trump and John F. Kennedy in their respective relations with the Deep State. Both presidents made extensive cooperation with Russia key to their policy priorities, but were rigorously opposed by the Deep State.

Both focused on greater international cooperation to peacefully resolve global conflicts, but were again opposed by the Deep State’s machinations to heighten these conflicts to fuel the armaments industry.

Finally, both Trump and Kennedy skillfully used space programs as a means for gaining access to classified reverse engineering programs. Kennedy through joint US-USSR space missions, and Trump through the creation of a Space Force and the Artemis Program. Yet again, the Deep State opposed their respective efforts.

The massive January 6 Washington DC protest carries far more significance than merely overturning fraudulent election results. It threatens to expose the Deep State behind the most recent coup effort, and in the process cast light on the 1963 coup that changed America and the world forever.