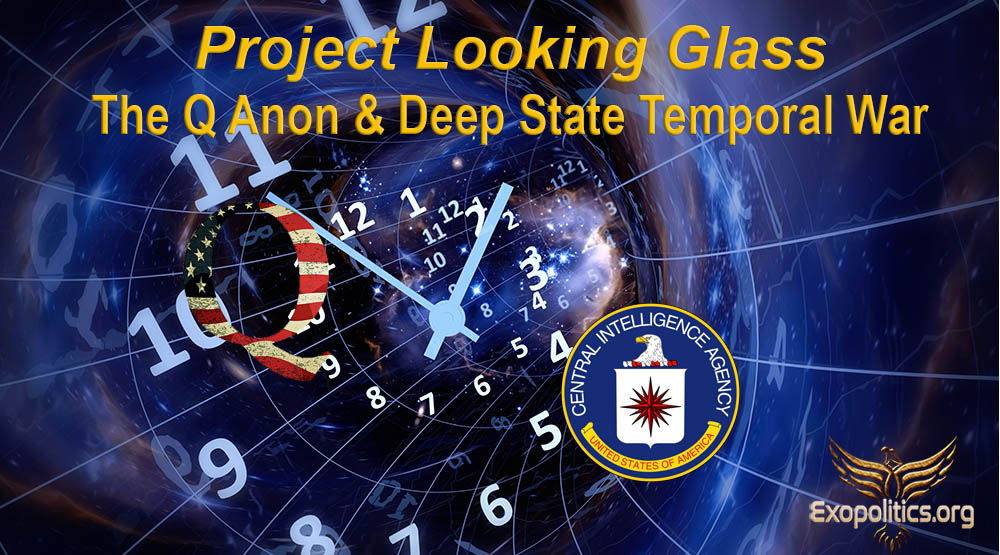 Soon after returning into the public arena with posts on the newly created 8kun channel, Q(Anon) made a very brief reference to a “Project Looking Glass”. Despite the post’s brevity, there is much behind this highly classified project that is relevant to the QAnon movement and the efforts of the Deep State to marginalize it and remove President Donald Trump from power.

The twitter link was to a tweet by Clark Petrounov, who claimed that what he first thought was a reference to a date in a Q post, 11.11.18, was an IP address belonging to the Department of Defense Network Information Center. The implication was that military servers were in some way involved in hosting the 8kun channel through which Q has once again resumed posting after 8chan was shut down due to different internet companies refusing to host it on their cloud servers.

Dang! So that was an IP Address. Not a date! #MilitaryPrecision@POTUS #QAnon #KAG #WWG1WGA #TheGreatAwakening #MAGA #Trump #Trump2020 pic.twitter.com/MBYUuZollm

Many believe that Q, based on multiple posts, is a group linked to US Army Intelligence working closely with the Trump White House. At first glance, it would be logical that military intelligence is helping 8kun to emerge online since that 8chan/8kun was the only venue on which Q posts. However, it’s unlikely that the US military would do this in any transparent way, given the legal and political implications of supporting a posting board that many in the general public have been convinced by the mainstream media to be a venue for radical right-wing radicals.

Nevertheless, by referring to Petrounovu’s tweet, Q was sending a clear message that the military intelligence community is in some way helping 8kun establish a new internet presence, perhaps by protecting it from DOS (Denial-Of-Service) attacks. This is where Q’s reference to “Project Looking Glass” becomes very significant.

The first public reference to a “Project Looking Glass” came from the legendary UFO whistleblower Bob Lazar back when he first emerged into the public realm in 1989 when he identified it as one of the classified projects run out of the S-4 facility at Area 51. In an interview Lazar (L) replied to a question about the project as follows:

L: Yeah, that was later on… when we started getting into the heavy physics of it because gravity distorts space and time and what they were trying to do, and I say look back in time and some people conjure up images of a time tunnel… they’re looking at distorting time in microseconds to see whatever event they were trying to observe through a gravitational lens… so that was a different project they were dealing with that… but that was essentially playing with gravity distorting time.

While Lazar was not himself involved in Project Looking Glass, others have come forward to reveal what they knew about classified military experiments to distort time to peer into the past.

Among these was Preston Nichols, who was involved in a classified project called Montauk that was first publicly revealed in his 1992 book: Montauk Project: Experiments in Time.

Nichols explained that the Montauk Project ran from 1971 to 1983 at Montauk Air Station, Long Island, New York, and involved many human subjects in bizarre military experiments. Some of these experiments involved humans being trained to use extraterrestrial technology, such as a chair that significantly enhanced psychic abilities so one could do extraordinary things like distorting or warping time to look into the past or future.

Nichols explained what happened when the psychic Duncan Cameron sat in the Montauk chair:

Duncan would start out sitting in the chair, then the transmitter would be turned on. His mind would be blank and clear. He would then be directed to concentrate on an opening in time from say, 1980 (then the current time) to 1990. At this point, a ‘hole’ or time portal would appear right in the center of the Delta T antenna – you could walk through the portal from 1980 to 1990. There was an opening that you could look into. It looked like a circular corridor with a light at the other end. The time door would remain as long as Duncan would concentrate on 1990 and 1980. (Montauk Project, pp. 88-89).

Basically, psychics were placed in the Montauk Chair and were, in this way, able to peer into different historical periods to gain information of interest to their military intelligence handlers.

There was a lot more to Montauk than merely viewing the past and future, as suggested by Nichol’s reference to being able to walk through the time portal. A recent documentary called “The Montauk Chronicles” describes the many bizarre experiments that occurred there, and the first-hand testimonies of many participants, the majority of whom were terribly abused. In fact, thousands of children were involuntarily pulled from the streets and were lost or killed after being sent through the “time portals.”

The Montauk Project, however, is not the earliest reference to extraterrestrial technology being in the possession of the US military, which allowed it to view events in different historical periods.

In a 1964 television interview, George Van Tassell, who claimed to have had physical contact with human-looking extraterrestrials, says that they showed him technology that could be used to view a visual scene from any historical time period, which the US Navy had in its possession.

Van Tassell says that the technology was quickly classified by the Navy and the inventor was forced to work for it. The time travel/viewing technology described by Van Tassel in his 1964 interview is very similar to what was decades later described by Lazar as “Project Looking Glass” which he said was also run by the U.S. Navy.

If we accept the testimonies of Lazar, Nichols, van Tassell, and others, then it is clear that the US military intelligence community has been conducting “Project Looking Glass” since at least the early 1960s.  Returning to Q’s November 11 post, is Q suggesting that the military intelligence community is using Project Looking Glass technology against the Deep State?

This is what Jordan Sather declares in his most recent video on his popular Destroying the Illusion youtube channel. He suggests, rather optimistically, this is why the Deep State has been befuddled by Q and the military intelligence community.

The earliest reference to the kind of technology discussed in Project Looking Glass actually comes from Italy in the 1950s! A Dominican priest by the name of Father Pellegrino Ernetti invented a Chronovisor by electronically modifying the frequencies of chants by Benedictine monks when viewed on a TV-like monitor. By manipulating the frequencies, Ernetti discovered one could look into the past. He claims to have witnessed the crucifixion of Christ and other historical events in this way.

In the book, Father Ernetti’s Chronovisor: The Creation and Disappearance of the World’s First Time Machine, Peter Krassa, investigates Ernetti’s amazing discovery. He explains how the technology was turned over to the Vatican hierarchy, which in turn passed it on to the Central Intelligence Agency. It’s worth emphasizing that the then chief of the CIA counter-intelligence division, James Jesus Angleton, handled both the Vatican and the Israeli desks during his long service from 1954 to 1975.

The CIA developed Chronovisor technology for the control group running extraterrestrial related projects, Majestic -12, one of the principal arms of the Deep State. Given that the CIA is the key agency for raising black budget funds for the entire military-industrial complex, it would have been easy to siphon off sufficient funds to conduct its own Project Looking Glass project.

Indeed, this is precisely what occurred, according to Andrew Basiago, a practicing attorney, who says he was involved in a Project Pegasus from 1967-1971 as a six-year old. He says that the chronovisor developed by Father Ernetti was refined by the CIA, in collaboration with the then Advanced Research Projects Agency (ARPA/now DARPA).

In Fall 1970, the children in my group first began accessing past and future events via third and fourth-dimensional Ernetti-Gemelli chronovisors situated at the General Manufacturing Company in Convent Station, New Jersey; a public auditorium under construction in Morristown, New Jersey; and the ITT Defense Communications facility in Nutley, New Jersey.

Basiago’s assertion of visiting a classified facility run by ITT in Nutley, New Jersey in 1970 received surprising corroboration by no less a personage than famed radio host Art Bell, who was at the time employed by ITT in a classified NATO communication project. This was information Bell had never before publicly revealed. He was clearly shocked as Basiago revealed during a live radio interview on August 14, 2015, how he encountered Bell working on a classified project at the Nutley facility in 1970 when Basiago was only 8/9 years old.

Basiago asserts that chronovisor technology was one among many ways in which the CIA and its intelligence partners could view the past and future in order to gain intelligence data and to also attempt to manipulate history through time travel experiments.

Consequently, it’s worth emphasizing that both the military intelligence community (Q) and the Deep State/CIA are using time distorting technologies to peer into the future to anticipate each other’s moves. This would explain why many of Q’s predictions have not panned out, and the Deep State appears to have warded off the most damaging revelations made by Q.

The conclusion is that we are not just witnessing an information war between Q/military intelligence/Trump administration and the Deep State/CIA/Majestic 12, but also a temporal war. Q’s reference to “Project Looking Glass” invites members of the Patriot movement to dive deep into the highly classified world of time-distorting technologies and their connection to visiting extraterrestrial life.