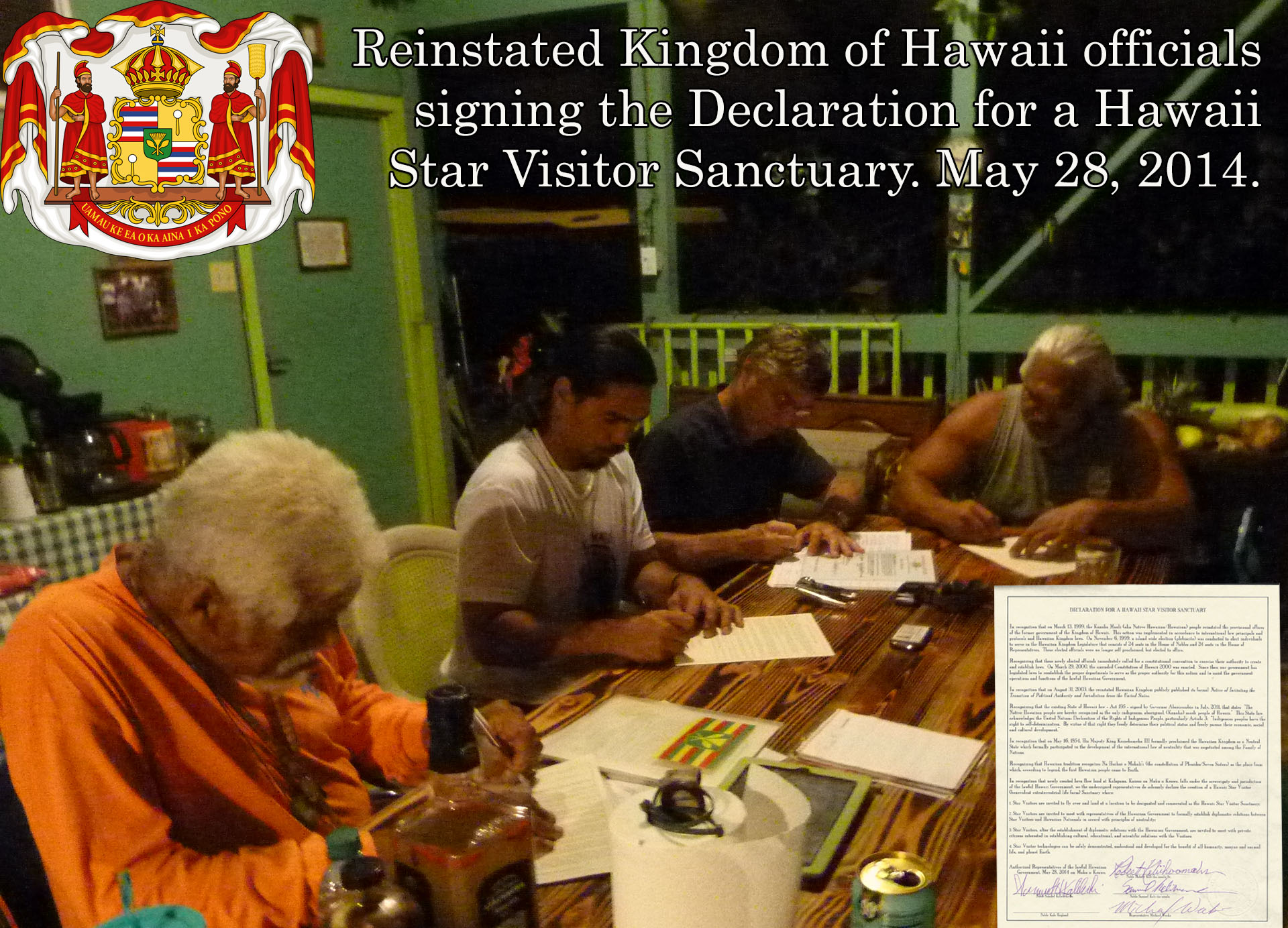 Written by Dr Michael Salla on May 31, 2014. Posted in Announcements, exopolitics activism On May 28, 2014 official representatives of the reinstated Kingdom of Hawaii released a declaration creating a sanctuary for extraterrestrial visitors to Earth. The “Declaration for Creating Hawaii Star Visitor Sanctuary” will make it possible for extraterrestrials to land on property set aside exclusively for hosting “star visitors” in the area of Kalapana on the Puna coast of the Big Island of Hawaii. The “Star Visitor Sanctuary” will be on sovereign land claimed by the reinstated Kingdom of Hawaii. The Kingdom comprises a government led by a Prime Minister, elected representatives to two houses of Parliament, and a revised Hawaii Constitution.

The Hawaii Star Visitor Sanctuary will be the second time a piece of land has been officially dedicated for the purpose of inviting extraterrestrial visitors to land and to promoting peaceful relations with them. On June 3, 1967, the city of St Paul in the Canadian province of Alberta, created the world’s first landing pad for UFOs. The sign besides the pad shows that part of the intent was to create a sanctuary for extraterrestrial visitors:

The area under the World’s First UFO Landing Pad was designated international by the Town of St. Paul as a symbol of our faith that mankind will maintain the outer universe free from national wars and strife. That future travel in space will be safe for all intergalactic beings, all visitors from earth or otherwise are welcome to this territory and to the Town of St. Paul.

Weighing just over 130 tons the landing pad was officially opened by Canada’s then Minister of Defense, Paul Hellyer. Later in June 2006, Hellyer gave the keynote address at the Extraterrestrial Civilizations and World Peace Conference held in Kailua-Kona on the Big Island of Hawaii, again affirming his support for developing peaceful relations with extraterrestrial visitors.

The Hawaii Declaration similarly declares the intention of establishing peaceful relations with extraterrestrial visitors. Drawing on the rich history of international neutrality that was practiced by the Kingdom of Hawaii prior to its illegal annexation by the U.S. the reinstated Kingdom aims to establish formal diplomatic relations with Star Visitors. The preamble to the Declaration points out that according to Hawaiian legend, the Na Huihui o Makali’i (the constellation of Pleaides/Seven Sisters) is the place from which the first Hawaiian people came to Earth.

The Declaration contains four substantive points the first of which invites extraterrestrials “to fly over and land” at the “Hawaii Star Visitor Sanctuary.” The next invites the Star Visitors to “formally establish diplomatic relations” with representatives of the Kingdom of Hawaii. The Star Visitors, in point three, will be subsequently “invited to meet with private citizens interested in establishing cultural, educational, and scientific relations with the Visitors.” The final point affirms that “Star Visitor technologies can be safely demonstrated, understood and developed for the benefit of all humanity, marine and animal life, and planet Earth.”

The Kingdom of Hawaii gains its authority from international law that never formally recognized the illegal annexation of the Kingdom by the U.S. government, and which has long recognized that the native Hawaiians right to self-determination was violated. This was belatedly recognized by the US Federal Government on November 23, 1993 by a joint resolution of Congress signed by President Bill Clinton (U.S. Public Law 103-150) that apologized for the illegal annexation of the Kingdom of Hawaii. The right of the Native Hawaiians to self-determination was also recognized by the Legislature of the State of Hawaii that passed a bill signed by Governor Bill Abercrombie on July 6, 2011.

In recognition of the illegality of US annexation of the Hawaiian Islands and the inherent right to self-determination of native Hawaiians under international law, on March 13, 1999, representatives of the Hawaiian people reinstated the provisional offices of their former Kingdom with the purpose of holding elections to appoint a new Hawaiian government. The provisional government held a plebiscite on November 9, 1999 that resulted in the election of representatives to a bicameral system of government. The newly elected parliament passed a revised version of the last Kingdom of Hawaii Constitution on March 29, 2000, that enshrined the rights and powers of the lawful Hawaiian Government over the territories of the Hawaiian islands.

On Friday, June 27. 2014, there will be a public ceremony dedicating the land assigned for the Hawaii Star Visitor Sanctuary, in accordance with Hawaiian tradition. The ceremony will occur on the first day of a Hawaiian Sustainability conference scheduled for June 27-29, at Uncle Roberts, Kaimu-Kalapana, Kingdom of Hawaii.

All are invited to attend this free public event.

To watch an ExoNews TV report about the Star Visitor Sanctuary, visit: http://youtu.be/wfJcP_uV938

To learn more about the Reinstated Kingdom of Hawaii, visit: http://hawaii-gov.net/