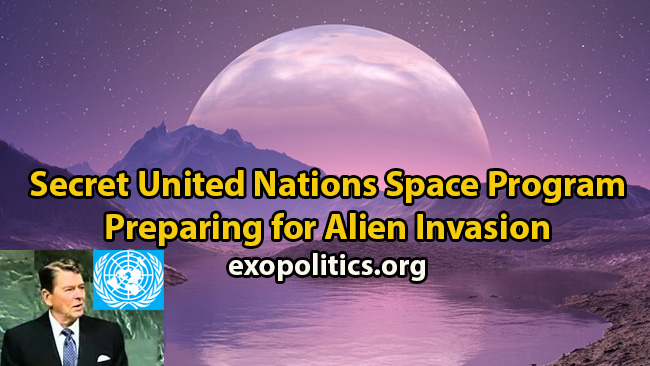 A secret space program was created for United Nations members states in the early 1990s that had agreed to cooperate for an alien invasion, according to the latest startling revelation by whistleblower, Corey Goode. He discloses, in his newly released Cosmic Disclosure Gaia TV interview, more details about the United Nations space program, which he had earlier briefly discussed in an email interview, as a NATO-type space program called the “Global Galactic League of Nations.” Goode says that the origins of the secret UN space program can be dated to the 1980s, with President Ronald Reagan’s statements concerning the need for global cooperation to prepare for an alien threat.

Goode began the interview by saying that during his 20 year tour of duty with a number of secret space programs, he visited a moon base in another solar system belonging to the Global Galactic League of Nations (GGLN). He says that he traveled there through a portal shuttle system, which made interstellar travel between the Earth and the exomoon very rapid – only a few minutes! Once there, Goode says that he saw personnel from many different nations in a very relaxed mood,  similar to what is depicted in the fictional Stargate Atlantis TV series. The mood on the GGLN moon base contrasted 180 degrees with what Goode experienced on the Mars colonies controlled by the Interplanetary Corporate Conglomerate.

The GGLN exomoon had a breathable atmosphere that orbited a nearby gas giant, according to Goode. He was told that the gas giant was part of the Pleiades star system, but was unable to confirm this. Most of the moon base personnel were scientists and engineers, who were working on advanced technologies that had been supplied to them by the Interplanetary Corporate Conglomerate. They were developing these technologies for defending the Earth from a possible alien invasion.

Goode elaborated on his earlier disclosure concerning the connection between Ronald Reagan’s statements about alien threats, the most famous of which was delivered at the United Nations General Assembly on September 21, 1987. This speech was the catalyst for United Nations member states reaching an agreement for forming a secret space program.

The GGLN would be supplied with advanced space technologies supplied by the same multinational aerospace corporations, which had become the backbone of the Interplanetary Corporate Conglomerate.

Goode’s final conclusion was that the GGLN was heavily compartmentalized and manipulated into believing they were building advanced defense systems to protect the Earth from an alien threat. They were not privy to all the information about different extraterrestrials, and thus could be easily manipulated into believing they were the tip of the spear for defending Earth. Goode did not discuss who the aliens were that might be threatening the Earth, but said it was based on what Reagan had earlier revealed. In the forthcoming book, Insiders Reveal Secret Space Programs & Extraterrestrial Alliances, a chapter discusses the relationship between Ronald Reagan and the UN secret space program. An alleged briefing Reagan was given in 1981 concerning hostile aliens is analyzed as the catalyst for his later statements concerning an alien threat and the need for planetary cooperation. The book further discusses how this unprecedented level of global cooperation was the real reason for the end of the Cold War.

The Cosmic Disclosure episode discusses other important historical developments, including the Soviet Union’s development of “cosmospheres,” where cosmonauts could travel into space in small metallic spheres, most of which could accommodate up to three personnel, with larger ones holding even more personnel. The Soviets used their cosmosphere sphere program as leverage for having a greater role in the secret space programs being developed in the United States in the late 1950s. Once again, this is an episode of Cosmic Disclosure that you don’t want to miss.

[Note: The first two episodes of Cosmic Disclosure are available for free on the Gaia TV website. The first episode is on Youtube.  To watch the whole season of Cosmic Disclosure, you need to subscribe to Gaiam TV. If you subscribe using this link, then a portion of your monthly subscription will go towards supporting Corey Goode as he continues his disclosures. His  website is here.]