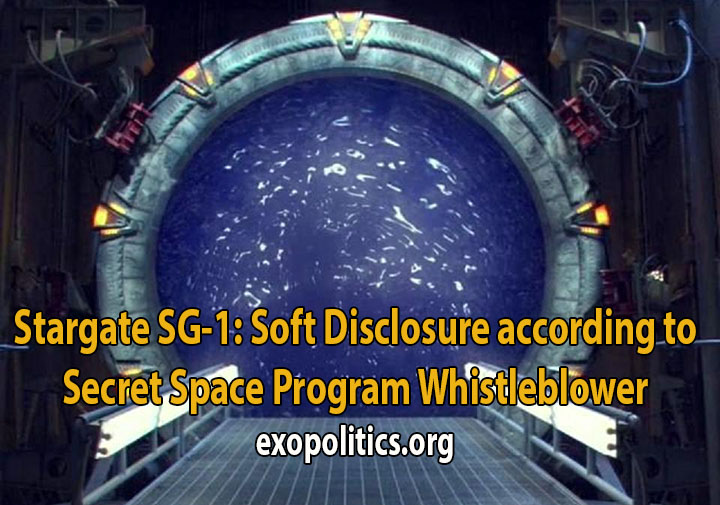 Could the highly popular television series Stargate SG-1 (aired 1997 to 2007) be more science than fiction? Secret space program whistleblower Corey Goode claims it is based on real-life advanced travel technologies found all over the planet, solar system and galaxy.

In the latest Cosmic Disclosure episode, “Portals: The Cosmic Web”, Goode responds to questions posed by the host, David Wilcock, about various kinds of travel technologies used by ancient societies and extraterrestrial civilizations. Goode described the difference between various “portal” or “wormhole” technologies that either naturally occurred, or were built by a highly advanced ancient civilization not known even to current extraterrestrial visitors to Earth. This is virtually the same scenario depicted in the Stargate SG-1 series, where stargates are described as being built by a race of beings called “the Ancients.”

Goode referred to technologies depicted in the Stargate SG-1 as a fairly accurate illustration of how ring-shaped ancient portals or “stargates” actually look and work. He said that the navigation system is similar to how the internet operates whereby numerical sequences are assigned for individual computers, networks, ISPs and countries. This is the basis for the IP (Internet Protocol) numbers, which are the backbone for navigating the World Wide Web. You can check the IP address of the device you are using to read this article here.

Similarly, Goode says that a series of numerical coordinates based on hyperdimensional mathematics designate different galaxies, solar systems, planets, etc., which becomes the address for a particular portal. This has similarities with the coordinate navigation system depicted in the original Stargate movie (1994) that was then incorporated into the Stargate SG-1 television series.

Goode is not alone in describing such a numerical address system. Wilcock pointed out that another secret space program whistleblower, Henry Deacon (aka Arthur Neumann), also claims that this is the navigation method used for portal travel. Deacon began publicly disclosing his information regarding portals/stargates back in a 2006 interview on Project Camelot.

Goode said that these ancient portals have been found all over the world, and these are highly sought after by covert teams from the U.S. and other countries. Another whistleblower, Dan Burisch, claims that he was part of a covert team that went into Iraq to find its portal technologies. Indeed, Deacon independently confirmed that a stargate had been discovered in Iraq. There was much circumstantial evidence supporting Burisch’s and Deacon’s claim that the real reason for the U.S. invasion of Iraq was to find ancient portal technologies, as I proposed back in 2003.

In an earlier episode of Cosmic Disclosure, Goode described the sun as a natural portal that is used by spacecraft to enter into or leave our solar system. Elaborating further, he said that solar filaments form torsion fields that create traversable wormholes for portal travel between suns in our galaxy.

The most startling aspect of Goode’s testimony is that the natural and ancient portal systems form a “cosmic web” that spans the universe. By jumping from one portal location to another, one can travel incredible distances between galaxies, and across the universe. Goode’s claim of a cosmic web of portals was also depicted in the Stargate SG-1 series.

The number of similarities between Goode’s account of portal travel with what was depicted in the Stargate SG-1 series raises an intriguing possibility. Was the series part of a “soft disclosure” or “acclimation program” whereby the entertainment industry was used to prepare the public for the truth about portal travel?

It is very plausible that the producers of Stargate SG-1 were given the key ideas that would disclose the highly advanced science used for portal travel, using fiction as a cover. Many episodes of the series depicted how the “stargate/portal” technology was kept secret from the Earth’s population, and the ethical problems this caused for USAF personnel. One episode even featured the USAF’s then serving Chief of Staff, General Michael Ryan,  who appeared in the Cheyenne Mountain complex which housed the ancient stargate technology.

It is very unusual for a sitting member of the Joint Chiefs of Staff to do a cameo for television, let alone a science fiction show depicting his military service hiding advanced technologies from the public for national security reasons. This Stargate episode clearly implied that very senior officials in the USAF were in favor of “soft disclosure” through the entertainment industry.

There are many more parallels between the Stargate SG-1 series and Corey Goode’s revelations about the portal travel system used in secret space programs. He has earlier described full disclosure as an event that will soon occur through massive document dumps. In this latest episode of Cosmic Disclosure, Goode reveals that the general public has been silently prepared for such an event by the “soft disclosure” offered by popular shows such as Stargate SG-1.

[Note: The first two episodes of Cosmic Disclosure are available for free on the Gaia TV website. The first episode is on Youtube.  To watch the whole season of Cosmic Disclosure, you need to subscribe to Gaiam TV. If you subscribe using this link, then a portion of your monthly subscription will go towards supporting Corey Goode as he continues his disclosures. His website is here.]