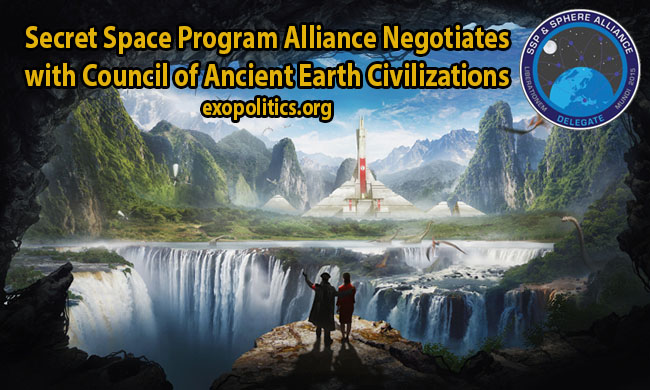 Human civilization has been divided into two distinct branches for millennia according to a report issued today by Secret Space Program whistleblower, Corey Goode. On the Earth’s surface, civilizations have risen and fallen as a result of cataclysmic events, wars, influxes of refugees from other planets, and genetic experiments by visiting extraterrestrial civilizations. In the Earth’s vast subterranean interior, another branch of humanity has found refuge and flourished for millennia, preserving ancient forms of knowledge and bloodlines dating back to a time before cataclysmic surface changes.

In his report, Goode describes a meeting held with a Council representing seven ancient human civilizations, which he described as the “Council of Ancient Earth Breakaway Civilizations.” He describes the Council’s vast historical perspective and why they limited or avoided interaction with surface humanity over the course of millennia.

Goode describes the distrust the Council has of surface humanity, which has been easily controlled and manipulated by secret societies (Cabal/Illuminati) that are aligned with an invasive extraterrestrial group called the ‘Draconians’, who are intent on exploiting surface humanity.

In order to protect themselves from the aggressive and warlike activities of surface humanity and a non-human subterranean race called the ‘Raptors’, the ancient breakaway civilizations claim they have had to pretend to be gods and/or extraterrestrials to hide their true locations.

Goode begins his report with a detailed explanation about the circumstances and events leading up to this meeting with the “Council of Ancient Earth Breakaway Civilizations.” He describes how a break-down in relations between the different secret space programs, the influx of highly advanced weapons, and the emergence of the “Sphere Being Alliance,” led to the ancient Earth civilizations feeling the strategic need to ally themselves more.

Their first step was to form a Council of the seven different ancient breakaway groups, which previously had different perspectives, and were isolationist in their political philosophies. Curiously, this relatively new Council did not include the ancient Mayan civilization that Goode had previously discussed extensively, who have played a very positive role in mitigating the effects of “service-to-self” extraterrestrial groups exploiting humans.

This new alliance would enable the ancient Earth civilizations to counter the increase in aggressive actions by the Illuminati/Cabal and their extraterrestrial allies, led by the Draconians. The latter were encouraging the Raptors to expand their subterranean domains of Earth, leading to territorial losses by the ancient Earth Civilizations. Goode describes the Raptors as a “particularly nasty race” that had “hideous reptilian features as well as a scrawny plume of feathers running down their backs.”

Goode described in great detail how the subterranean Earth civilizations view themselves as racially pure in contrast to surface humanity:

They each described their perceptions of those of us on the surface as uncivilized barbarians who are diseased and genetically impure. They said they were the only ones who had preserved the various original earth human bloodlines.

Wave after wave of refugees from nearby planets had since co-mingled their genetics with the original humans of this planet, and had taken over the surface world like a plague.

Goode refers to four catastrophes on the Earth’s surface that led to the formation of breakaway subterranean civilizations:

They stated that in the nearly 20 million years since the original human bloodlines had arisen on Earth, there had been four major cataclysms that had either changed the Earth’s axis, rotation or orbital path around the Sun.

Each time one of these events occurred, the “elite” or priest caste kept their genetic line pure through isolating themselves beneath the ground. These small groups survived while their surface counterpart civilizations perished.

From time to time, these ancient civilizations would help surface humanity rebuild their destroyed societies according to what Goode was told:

Over oceans of time and smaller destructive events on the surface, which were still obviously catastrophic, nearly all signs of their former civilizations were erased from the memories of the survivors. Only myths and legends of advanced gods remained.

They stated that they would emerge from time to time to kick-start the civilization of the survivors who were the most closely related to them in terms of their genetics.

They claimed that these surviving races assumed they were the gods of their own ancient legends. It was decided that they would allow those they were assisting to believe they were gods, in order to keep their subterranean civilizations secret and secure.

Goode says that refugees from other worlds flooded the Earth’s surface and intermixed with the surviving population after the cataclysms:

To add to this incredible story, they stated that more and more advanced groups began to arrive from outside our solar system during and after these cataclysmic events. These new groups began to take advantage of the situation, such as to farm and manipulate the genetics of the natives of this solar system.

They claimed that the Earth became the destination of the refugees from these other inhabited planets. Advanced ETs relocated these refugees here in several waves as cataclysms occurred on their home planets. The refugee races were genetically similar to the original humans of Earth, but were much more aggressive.

The ancient Earth civilizations knew about the Guardians or the “ancient Builder Race” that Goode has described in a number of Gaiam TV interviews:

The subterranean groups claimed that there had been an ancient civilization that had protected this region of the galaxy for literally billions of years. They were referred to as “The Guardians,” and the Secret Space Program referred to them as the “Ancient Builder Race”…. This Guardian race was extremely advanced. There were no other ET groups who would even think of violating their region of space.

The survivors of those inhabited worlds within our solar system relocated to the Earth. They were extremely aggressive, and began to reproduce and interbreed with the original humans that were on the Earth’s surface.

The ancient human society explained why they had to deceive surface humanity in order to counter the agendas of extraterrestrials:

They continued to appear to certain distant genetic relatives on the surface as gods and ascended teachers, to help them develop their civilizations and themselves spiritually. This was done in the hopes that they might be able to overcome the aggressive part of their genetic programming. This effort has continued right up until the present time.

They decided to start presenting themselves at ETs from other star systems when the surface population became more technologically sophisticated. They say that will continue to do this to keep the people they make contact with looking to the stars, instead of beneath their feet.

The ancient human civilizations are not optimistic about surface humanity’s chances of changing its aggressive behaviors despite the arrival of the Sphere Being Alliance who are believed by the former to be the ancient Guardians:

They stated that they are not optimistic that we will be able to do accomplish this, even with the continued energetic changes or return and assistance of the Guardians. This was quite surprising to hear, as they were obviously referring to the Sphere Alliance as the Guardians….

These subterranean groups are under the impression that after a full disclosure event and the removal of the manipulative ETs from our solar system, it will still take several generations for us to heal and evolve as a civilization. Only then will we be able to have open contact with their civilizations as equals.

The ancient breakaway civlizations are not happy that the Secret Space Program Alliance is acting as the intermediary to the Guardians/Sphere Being Alliance.

They were not exactly thrilled about forming this new council, or reaching out to the SSP Alliance Council to request contact with the newly-returned “Guardians.”

Apparently the Guardians were not going to contact them on their own. If they wanted any access at all, they had to work with us as a team.

They flatly stated that they were doing this under duress. Their alliance was forced into existence by the vast array of problems they were having. This included the lethal resistance they were encountering from various subterranean ET refugees and “ancient pre-human Earth races.”

Goode went on to explain that the ancient subterranean civilizations are frightened of surface humanity:

These people are frightened of us. We inherited very aggressive genetics from groups the refugee groups that were relocated to our planet as well as from genetic manipulation from groups such as the various “Grand Experiment ET’s” and the Draco that they themselves do not possess.

There is much more in Goode’s Report about the philosophy and activities of the ancient subterranean civilizations, and their relations with extraterrestrial visitors and surface humanity. Goode says that he also visited their library which will be the subject of part two of his report.

Corey Goode’s latest report is certain to create much controversy over claims that individuals believing they have had contact with extraterrestrials, were actually being deceived by one or more of these ancient subterranean human breakaway civilizations.

Most controversial is the claim that subterranean humans are genetically purer than surface humanity, which enables them to access ancient technologies left behind by the “Builder Race.” This reminiscent of the claims made by Edward Bulwer Lyton in his book, Vril: The Coming Race (1871), which had a powerful influence at the end of the 19th century.

Lyton’s book depicted a subterranean human race that could harness the Vril Force to use highly advanced technologies. Lyton’s book contributed to the rise of the German Vril Society and the eventual formation of the first secret space program in the 20th century. This historic process is outlined by Goode in an earlier email interview, and discussed in more detail in the new book, Insiders Reveal Secret Space Programs and Extraterrestrial Alliances.

If Goode’s report of his most recent Secret Space Program meeting is accurate, then surface humanity will eventually openly interact with its subterranean ancestors. There will be many controversial issues to navigate, and past conflicts to resolve, as we all learn about a much richer and complex human history than anything previously imagined.