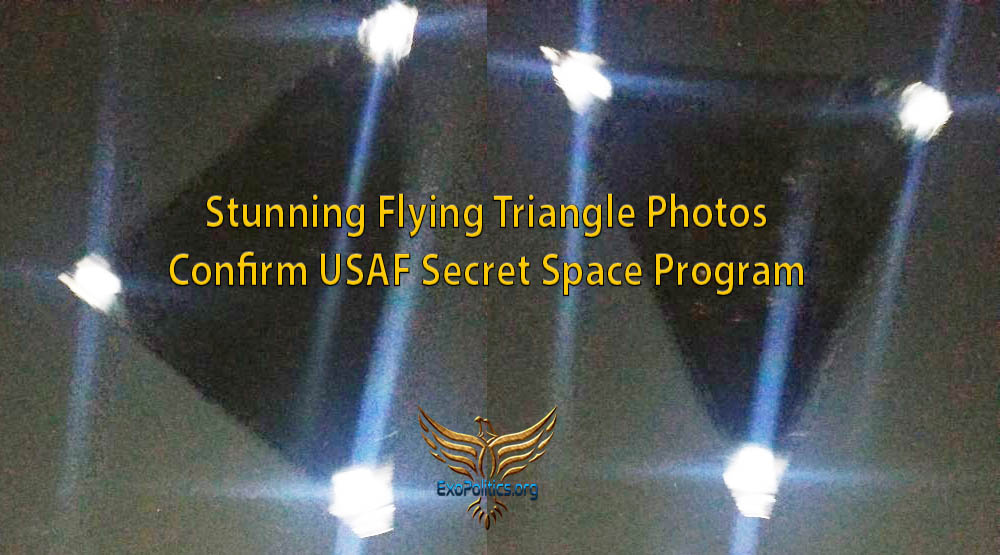 On February 18, four stunning photographs of a flying triangle shaped craft was taken in Orlando, Florida at around 1:20 am. The photographer, my confidential source JP, was then approached by two men in black who threatened him to remain silent about what he had seen and photographed. The craft appeared with three lights shining, one at each corner, and hovered about 45 feet (13.7 meters) away from him over a secluded field near his home.

In a Skype message, JP told me about what had happened. He recalled going to bed around 10 pm on Sunday night, and then waking up at 2:30 am with a sore throat. He says that when he checked his phone, he saw four pictures of a flying triangle. He then remembered that he had been standing out in the field and taking the photos and video of the craft. He says that he felt an electromagnetic field around the craft which was the size of a school bus.

After taking the photos and videos he remembered starting to walk back home. After 10 minutes, JP says that two men in black approached him and threatened him not to tell me about it in particular. He says that one of the men pulled out something like a gun and threatened him. He next remembered waking up in bed. The video of the craft was gone, but the photos remained. What follows is a short video of the original four photos and enhancements to better clarify what JP photographed.

In previous encounters with antigravity craft, both in Tampa (next to McDill Air Force Base) and Orlando, JP recalls being taken inside the craft where he has had multiple experiences with personnel belonging to USAF Special Operations. These earlier incidents have been described in articles where I have analyzed the photos he has taken, and the circumstances of each encounter.

In the earlier incidents, JP recalls being encouraged to take photos of the different shaped craft by covert personnel associated with Air Force Special Operations, but then being threatened by personnel associated with the CIA not to take any videos of the incidents. Indeed, he says that other videos prior to the February 18 incident had also been mysteriously deleted from his phone.

In the February 18 incident, JP believes that he was followed from his home to the field by CIA personnel who have him under constant surveillance due to the regular contacts he has been having with both Air Force secret space program personnel and extraterrestrials, which I have described in previous articles.

JP supplied a screenshot of the information from the last of the four photos he took, which gives the timestamp of when it was taken, confirming his recollection of the events that transpired early in the morning of February 18. The following images are of image 4 in the sequence (original with no enhancements) and the screenshot of his camera phone of the time when it was taken.

JP’s stunning photos are powerful evidence of a Secret Space Program run by USAF Special Operations, which is encouraging him to take photos and videos of their antigravity spacecraft. Other government entities, such as the CIA, are not happy with this arrangement, and are intimidating and harassing JP [see note below], and deleting video evidence of what he is witnessing.

Feel free to share this article with original links. For those planning to incorporate the above video and/or original photos in their own YouTube videos/articles, you have permission to do so provided you link to the original source.

[Special Note: JP recently lost his job after he began sharing his photos with more members of the general public, after repeated warnings of not to do so by personnel associated with the CIA. He has been pressured to join the U.S. military in order to resolve his financial problems, but has resisted since it would impact his ability to share his startling experiences with the public. If you would like to support JP in his efforts to continue disseminating his photos and information, you can do so through a donation via the Exopolitics Institute. Please use the following Paypal link for your donation and mark it, “JP Donation” .]