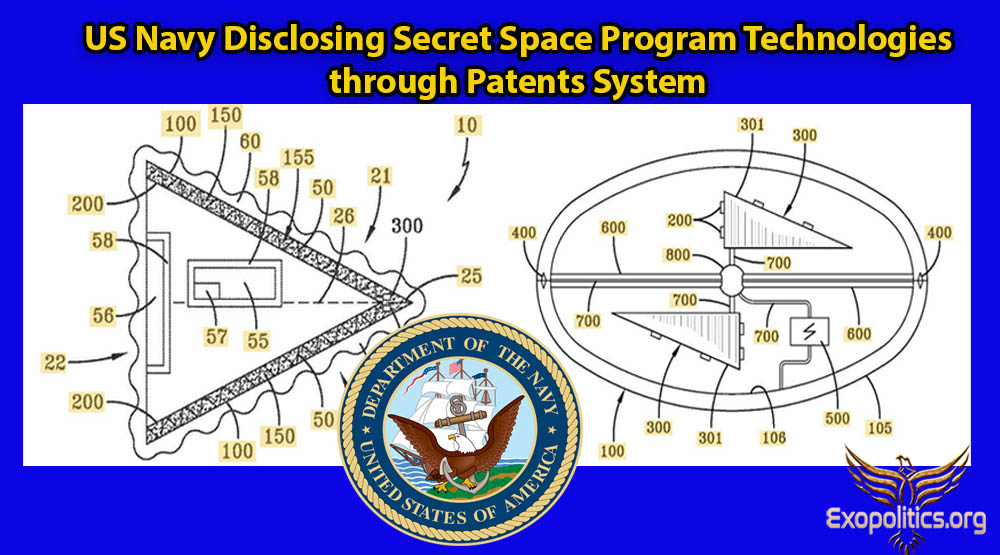 Written by Dr Michael Salla on July 13, 2019. Posted in Featured, science and technology

The US Navy has arranged for one of its scientists to openly apply for patents of advanced technologies that are allegedly under experimental development, but according to multiple insiders have been covertly developed and used in secret space programs for decades. In four patent applications lodged since 2015, the applicant, Dr. Salvator Cezar Pais, who filed on behalf of the Secretary of the Navy as the Assignee, has proposed revolutionary inventions that use principles such as electromagnetic propulsion rather than more conventional liquid fuel propulsion.

In one application, Philip J. Bonzell, a Primary Patent Examiner for the United States Patent and Trademark Office (USPTO) believed the proposed invention of “A Craft Using an inertial Mass Reduction Device” was so outlandish and scientifically unfeasible that he rejected it on November 28, 2017.

The rejection led to an immediate appeal by a Navy attorney who provided a supporting letter dated December 15, 2017, by Dr. James Sheehy, the Chief Technology Officer for the Naval Aviation Enterprise. Sheehy pointed out that Pais was employed by the Navy, and was currently working on proving the feasibility of the revolutionary propulsion system for a hybrid aerospace undersea craft described in the application. Illustration of a craft using an Inertial Mass Reduction Device

Sheehy furthermore asserted that China was seriously researching similar technologies and the Navy would face high costs if the patent weren’t granted:

2…. Dr. Pais is currently funded by NAWCAD [Naval Air War Center Aircraft Division] to design a test article instrumentation to demonstrate the experimental feasibility of achieving high electromagnetic (EM) field-energy and flux values… He is currently one year into the project and has already begun a series of experiments to design and demonstrate advanced High energy Density / High Power propulsion systems.

5. Based on these initial findings I would assert this will become a reality. China is already investing significantly in this area and I would prefer we hold the patent as opposed to paying forever more to use this revolutionary technology.­

Bonzell decided to reverse his decision and granted the patent on December 4, 2018. Other patents awarded to Pais involved the creation of a “High Frequency Gravitational Wave Generator”(2019), a “Piezoelectricity-induced Room Temperature Superconductor” (2019) and an “Electromagnetic Field Generator and method to generate an Electromagnetic Field” (2018).

In the four patents granted to Dr. Pais, on behalf of the Department of the Navy, there is little data on his background. In a detailed article titled, “Docs Show Navy Got ‘UFO’ Patent Granted By Warning Of Similar Chinese Tech Advances”, the authors, Brett Tingly and Tyler Rogoway, delved into Pais’ background and found the following:

Little information can be found about Salvatore Cezar Pais; he has virtually no web presence. What is known is that he received a PhD in Mechanical and Aerospace Engineering from Case Western Reserve University in 1999 and that he currently works as an aerospace engineer for NAWCAD at Naval Air Station Patuxent River in Maryland – the Navy’s top aircraft test base. Pais has published several articles and presented papers at American Institute of Aeronautics and Astronautics conferences over the years describing his work in electromagnetic propulsion, revolutionary room temperature superconductors, and topics like his PhD dissertation: “Bubble generation under reduced gravity conditions for both co-flow and cross-flow configurations.”

One of the key observations of Tingly and Rogoway was that none of the patent applications were marked for classification, even though that was an option the Navy could easily have chosen if they wanted to maintain secrecy for national security purposes. Instead, the Pais applications ignored the option to keep the technologies secret as evidenced by his application for “A Craft Using an Inertia Mass Reduction Device” where the “Request Not Publish” option is unchecked.

Tingly and Rogoway speculated about the Navy’s intentions:

If such a propulsion technology was so revolutionary and if the Navy indeed wanted to keep this technology out of others’ hands, it’s curious that they would choose to make the patent public. Maybe the Navy is signaling to its adversaries that it, too, is aware of this revolutionary capability and to whom it belongs.

Given what we know about secret space programs developed by the US Navy and Air Force respectively, electromagnetic propulsion systems have been used for decades in several crafts that operate both in space and underwater. The reason why Dr. Pais chose not to mark the patent applications secret was that senior Navy officials have decided the time had come for the disclosure of advanced electromagnetic propulsion technologies that were already in operation, rather than merely innovative proposals for future development as suggested in the patent application.

By arranging for one of its scientists to not only publicly apply for patents on revolutionary propulsion technologies, but to actually intervene when the application was turned down marks an extraordinary turn of events. The US Navy is moving forward with the disclosure process and is using the US patents system as the mechanism for the general public and scientific community awakening to the revolutionary potential of propulsion and energy storage systems using electromagnetic principles.

What adds further credence to this conclusion is the role of the Navy in leaking graphic videos of US Navy jets encountering Tic Tc shaped UFOs over the Pacific and Atlantic oceans in 2004 and 2014, and of the tradition breaking practice of allowing fighter pilots to give interviews of the encounters.

Tingly and Rogoway further speculated about the remarkable similarity between the craft in Dr. Pais’ patent applications and the Tic Tac sightings:

Normally, I would agree with others that these patents are likely just the Navy ensuring that when or if this technology does become available, the U.S. will be able to control it. However, these are not normal times. Thanks to To the Stars Academy (TTSA), the Department of Defense, and the media at large, not only are we now being told that Navy pilots have witnessed aircraft behaving exactly like the craft these patents describe, but some of the pilots’ visual descriptions of those anomalous aircraft even seem to be uncannily similar to the drawings of the aircraft as depicted in Pais’ patents.

The similarities between the technologies described in Pais’ patent applications and the Tic Tac UFO sightings clearly encourages speculation that the technologies proposed by Pais have already been developed, and that is what the Navy pilots have been witnessing. It’s worth repeating that Sheehy acknowledged in his appeal letter supporting Pais that the Chinese were already investing in such revolutionary technologies.

Indeed, Tingly and Rogoway speculated that Navy might be playing catch up to Chinese SSP who may be further along in the development of such technologies:

As striking as the similarity between the claimed capabilities of the hybrid craft and those of the objects described by Navy personnel, it’s still unknown whether these patents are related to the ongoing UFO revelations…. Perhaps the few pieces of footage that have trickled out over the last several years that some claim to show advanced craft could be the Navy’s way of subtly hinting that this concept actually works and is being tested in the field by either the U.S. or the Chinese. The fact that Sheehy would lean so heavily on the Chinese threat in the last bullet point of his appeal letter to the USPTO seems to suggest that the Navy may already be playing catch-up to a terrestrial foe.

I deeply doubt that the Navy is playing catch-up to what the Chinese have secret developed. Tingly and Rogoway do not appear to be aware of the many insiders who have come forward with their startling testimonies about U.S. reverse engineering programs involving captured flying saucer technologies that go back as far back as the 1940s.

The recent developments in the cases of Bob Lazar and Admiral Thomas Wilson who respectively described reverse engineering programs of captured alien technologies dating from the 1980s and 1990s, indicates how much public awareness has grown in understanding such programs. Nor do Tingly and Rogoway appear aware of the Navy and Air Force having developed parallel secret space programs using advanced electromagnetic technologies as a result of their reverse engineering efforts. My latest book, the US Air Force Secret Space Program: Shifting Extraterrestrial Alliances and Space Force, provides historical documents and testimonies outlining the origins of the parallel programs, and the aerospace technologies that were covertly developed.

There is a great cause for optimism that Dr. Pais’ patents are part of an officially sanctioned disclosure process by the US Navy wanting previously suppressed technologies to be released into the public arena. The revolutionary potential of electromagnetic technologies for the aerospace industry is enormous. We are on the verge of witnessing the kind of rapid advances in the aerospace industry when it comes to energy storage and propulsion, which has become a norm in the telecommunications industry, thanks to microprocessor storage capacities doubling every two years.