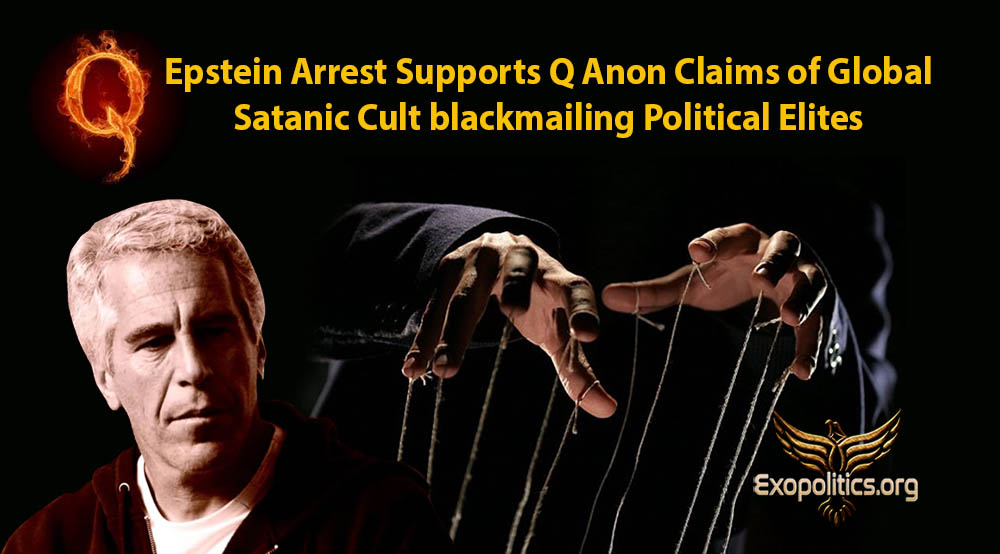 Written by Dr Michael Salla on July 10, 2019. Posted in Featured, US Politics

The arrest of billionaire financier Jeffrey Epstein on child sex trafficking charges threatens to unmask a far deeper layer of crimes that involved the ritualistic abuse of children on Epstein’s private island, and the many political elites that were flown there to participate. The arrest directly supports repeated claims made by the military intelligence group Q Anon that Epstein was part of a global Satanic cult that blackmailed political elites who were compromised at Epstein’s island through the sexual exploitation of children, and more serious physical abuses.

As US Federal prosecutors investigate the full extent of the crimes committed by Epstein through his child sex trafficking ring, the sinister activities that occurred on his island will receive closer scrutiny, as will the involvement of those elites that participated.

News of Epstein’s arrest was first broken by the Daily Beast, which revealed that he was to be formally charged with sex trafficking of children. On Monday, July 8, Epstein’s sealed indictment was unsealed and publicly released. It states:

In the unsealed indictment, the focus is on two of Epstein’s properties, those in Manhattan and Palm Beach. The indictment opens the door to further changes of similar sex trafficking at “other locations” including his private island in the U.S. Virgin Islands called “Little Saint James.” In addition to a mansion and guest houses, Little Saint James includes a temple-like structure, which I will discuss later (see Wikipedia). At a press conference, prosecutors invited other victims to come forward and share their testimonies with investigators from the FBI and the Southern District of New York. The invitation is expected to open the floodgates to many new witnesses coming forward with their accounts of what they witnessed or participated in at the various residences owned by Epstein, especially his private island that was a popular retreat for elites as evidenced by flight records.

Among the first to draw attention to Epstein and the crimes being committed on his private island was the military intelligence group Q Anon. In a November 11, 2017 post, Q Anon laid out the big picture of how a Satanic cult controls social and political elites through the sexual exploitation and abuse of minors, and how Epstein’s Little Saint James was a key part of this global network.

Q began (post 133) by laying out who were the “puppet masters” atop this Satanic network and how they control more than seven trillion dollars in assets to manipulate governments and political elites through slush funds, war, and various global agreements:

Q goes on to describe how at the pinnacle of global power structure lay different families (bloodlines) that are part of a global Satanic cult:

Triangle has (3) sides.
Eye of Providence.
Follow the bloodlines.
What is the keystone?

Epstein island.
What is a temple?
What occurs in a temple?
Worship?
Why is the temple on top of a mountain?
How many levels might exist below?
What is the significance of the colors, design and symbol above the dome?
Why is this relevant?
Who are the puppet masters?
Have the puppet masters traveled to this island?
When? How often? Why?
“Vladimir Putin: The New World Order Worships Satan”
Q

The temple on Epstein’s island was situated atop a small hill on Little Saint James, and appeared to be the top level of a multilayered structure comprising tunnels and rooms situated deep beneath it, as illustrated by the following image. Q’s post alluded to the temple being part of a global network of Satanic worshippers. By “puppet masters”, Q was referring to the Rothschild Family, the House of Saud, and the Soros Group, and asking supporters to investigate how many members of these elite families had visited Epstein’s Little Saint James.

It’s important to keep in mind that Q made the above post in November 2017, and has referred to Epstein many times since as attempting to hide the activities that occurred on his private island. In an April 3, 2018 post (#999), Q said:

Why is Epstein spending $29mm to bury the tunnels underneath is temple on Epstein Island?
Problem.
Phones were allowed in.
These people are stupid.
Q

So even though the tunnels under the temple on Epstein’s island were being destroyed to hide evidence of Satanic ritual abuses that occurred there, Q was alluding to phones that covertly recorded what had happened through backdoor hacking tools used by the NSA. Apparently, the NSA was able to monitor and record activities inside the temple through the phones brought in by elites who never thought they would be caught.

The current estimate is over 100,000 sealed cases, a significant proportion of which are sealed indictments such as Epstein’s. Another recently unsealed indictment involved Keith Raniere, founder of the sex cult, NXIM who on June 19, 2019, was found guilty of sex trafficking by a Brooklyn jury. Many major media sources are giving Epstein’s arrest prominent coverage, but are spinning the information in a way that is damaging to the Trump administration through his current Labor Secretary, Alex Acosta, who had negotiated a sweetheart deal for Epstein under previous Federal charges brought forward in Florida. Acosta is expected to soon resign or be sacked by the Trump White House.

Presently, the mainstream news is focused firmly on child sex trafficking abuses that occurred at Epstein’s Manhattan and Palm Beach residences. Yet, Q Anon has been telling us for over 1.5 years about even more sinister abuses occurring at Epstein’s private island, and the many elites that directly participated.

Given the current charges brought against Epstein, it’s all but certain that similar sexual exploitation of children was occurring at Epstein’s Little Saint James, and this will likely lead to further charges as victims come forward identifying those who abused them. However, it’s the far more sinister Satanic ritual abuses that occurred at Epstein’s island that Q Anon is telling us to pay close attention to, since this involved elites that would subsequently be blackmailed by the “puppet masters” (Rothschilds, Saudis, and Soros).

Epstein’s arrest is not the first time that evidence has emerged of political elites being compromised through sexual liaisons with minors and/or being involved in Satanic ritual abuse. The 1992 book, The Franklin Coverup, by John DeCamp, a former State Senator for Nebraska (1971-1987), presented much evidence of such practices.

Additionally, a former Dutch banker, Ronald Bernard, has given his firsthand testimony about how the pyramid structure of the Illuminati (aka Deep State) operates, and how the progression to higher levels requires participation in Satanic ritual abuse of children.

Unfortunately, both DeCamp’s book and Bernard’s revelations were widely ignored by the mainstream media, which, as Q repeatedly tells us, is controlled by the Deep State.

As Federal investigators dig deeper into the elite figures involved in the manipulation and abuse of minors in a sex trafficking ring, there will be many more sealed indictments being publicly unsealed for upcoming arrests and trials. This will ultimately lead to the exposure of abuses that occurred at Epstein’s other residences, particularly at Little Saint James.

The unsealing of the sealed indictment against Epstein comes as a powerful vindication for what Q has been revealing for well over a year about thousands of sealed indictments secretly put in place against Deep State figures. As more sealed indictments are released to the public, we will learn about the Satanic practices that lie at the core of how the Deep State operates and is run by leading families.

In previous articles, I have shown the connections between Satanism, ruling bloodline families, extraterrestrial life, and the suppression of advanced technologies. As the collapse of the Deep State accelerates with Epstein’s arrest, we are destined to learn much about many previously kept secrets and can thank Q Anon for having been a catalyst for the events we are presently witnessing.