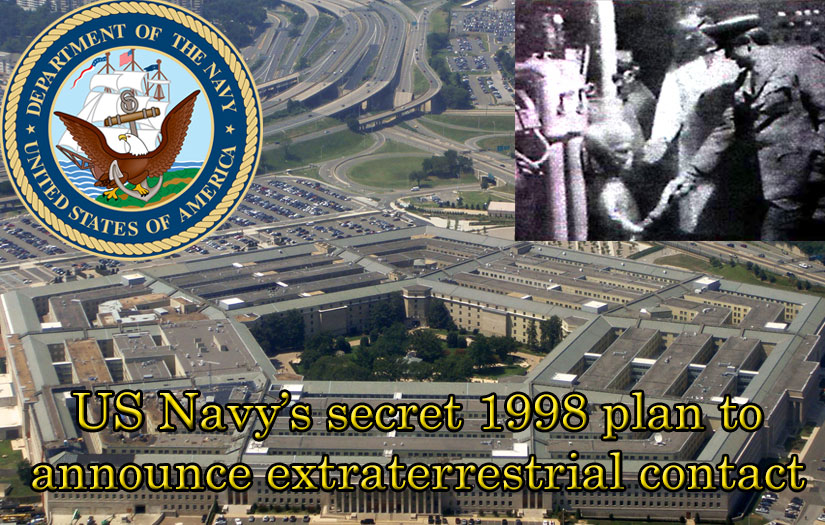 In honor of US Independence Day, Catherine Austin Fitts, a former Assistant Secretary of the Department of Housing and Urban Development (HUD), released a document supporting her claims that the US Navy initiated a plan in 1998 to adjust its operations for a future where extraterrestrials exist and live among us. She claims the plan was commissioned by the Undersecretary of the US Navy and was undertaken by the Arlington Institute, an NGO located near the Pentagon with many military clients, where Fitts served on the Board of Directors. She was asked to assist with the plan and claims she was given an opportunity to meet a live alien, but declined. When I contacted the Arlington Institute in 2008, two members of the Board of Directors repudiated Fitts claims. The document released on her website is the official minutes of a Board of Directors meeting held at the Arlington Institute in 2000. The document confirms key elements in her version of events, especially that Arlington Institute was actively discussing plans for how to best prepare the general public for disclosing the existence of, and contact with, extraterrestrial life.

Catherine Fitts claims that in 1998 the Undersecretary of the U.S. Navy had commissioned a “high level strategic plan” to prepare the American public for an official announcement that extraterrestrials exist and live among us. She wrote:

In 1998, I was approached by John Peterson, head of the Arlington Institute, a small high quality military think tank in Washington, DC. I had gotten to know John through Global Business Network and had been impressed by his intelligence, effectiveness and compassion. John asked me to help him with a high level strategic plan Arlington was planning to undertake for the Undersecretary of the Navy. At the time I was the target of an intense smear campaign that would lead the normal person to assume that I would be in jail shortly or worse. John explained that the Navy understood that it was all politics —- they did not care. I met with a group of high level people in the military in the process — including the Undersecretary. According to John, the purpose of the plan — discussed in front of several military or retired military officers and former government officials— was to help the Navy adjust their operations for a world in which it was commonly known that aliens exist and live among us. When John explained this purpose to me, I explained that I did not know that aliens existed and lived among us. John asked me if I would like to meet some aliens. For the only time in my life, I declined an opportunity to learn about something important.

In March 2008 I was planning to write an article about Ms Fitts claims, and began my investigation by first contacting her to elaborate or clarify her earlier recollection. Fitts said she had nothing to add to what had already been released to the public. I then contacted John Petersen, President of the Arlington Institute. He flatly denied Ms Fitts claims and offered to put me in communication with other members of the Board of Directors to get independent confirmation. In subsequent email communications with Joe Firmage, another Board member, he also denied Ms Fitts version of events, and did not recall any meetings where she was also present where the issue of extraterrestrial life was discussed. I was unsuccessful in reaching Jerry MacArthur Hultin, who served as Undersecretary of the Navy during the period mentioned by Fitts.

To varying degrees, Petersen and Firmage both claimed there was no substance to Fitts story. Petersen was especially insistent that Fitts had contrived the entire scenario. Given that two members of the Arlington Institute Board of Directors directly contradicted her version of events, and I was not able to find any other witnesses to support her claims, I decided to postpone writing an article on the incident until independent confirmation could be found.

Almost five years later, in my recently published book, Galactic Diplomacy: Getting to Yes with ET, I included the incident described by Catherine Fitts along with the denial by John Petersen and Joe Firmage. I wrote:

I have been able to confirm that Fitts served on the Board of Directors of the Arlington Institute during the period in question, and that extraterrestrial life was discussed at some of its closed door meetings as a hypothetical “wildcard event.” However, Fitts’ specific claim of there being a strategic plan sponsored by the U.S. Navy to prepare the public for disclosure of extraterrestrial life, or of a possible meeting an extraterrestrial, was not supported by other Board members.414

In the footnote 414, I gave some details of my communications with Petersen and Firmage. On July 4, 2013 I received a short email by Ms Fitts with a subject header referencing footnote 414 in my Galactic Diplomacy book where I elaborated on the repudiation of her claims by Arlington Institute Board members. The content of her email directed me to a new page on her Solari website which was just uploaded.  She wrote:

In the spirit of Independence Day, I am publishing the minutes of the board meeting of the Arlington Institute on April 10th, 2000. I have repeatedly stated that I would do so if my description of this meeting was contradicted by any of the members.

Mr. Petersen then reported that the Institute had been approached to determine if it was interested in publishing a study by Pickford and Lindemann on the subject of life outside of the earth. After discussion, there was general agreement that publication of the study would be a good idea and would be consistent with the work otherwise being done by the Institute with respect to wild cards.

While the study mentioned by Pickford and Lindemann is not identified, here is an online account of eight alien contact scenarios they developed for a workshop on extraterrestrial contact as recalled by one of the participants:

Called the second “Contact Planning” meeting and held in Denver, Colorado, this workshop was sponsored by the International Space Sciences Organization and organized by Kyle Pickford and Michael Lindemann…. We spent one afternoon in five groups: business, religion, science, government, and media/public. Each group role-played its behavior for each of eight scenarios. Although I have read lots of literature on post-contact behavior, this was the first time that I deeply grasped just how people in each of those categories may actually behave right after contact…. What can we do now to prepare? We spent the last few hours of the meeting generating and clustering various strategic planning possibilities. A large number of these ideas clearly fit into two clusters that I find very encouraging: (a) tell the general public the truth right away and (b) prepare to communicate and negotiate with ETI in a friendly and cooperative manner, even if its behavior seems unfriendly.

The minutes of the meeting confirm that the Arlington Institute was discussing extraterrestrial contact scenarios in at least one Board of Directors meeting as Fitts claimed. Importantly, the minutes confirm that the Arlington Institute was doing work for clients that involved extraterrestrial contact as a wild card issue. According to Ms Fitts, one of these clients was the US Navy.

In private email communications, Petersen confirmed that Fitts did participate in a Navy Project conducted by the Arlington Institute, and that the extraterrestrial contact issue did come up as a “wild card” future scenario event. However, he pointed out that there was no strategic plan commissioned by the US Navy to prepare the public for extraterrestrial contact as claimed by Fitts.

There remains substantial differences between Catherine Fitts and John Petersen over the extent to which the US Navy interest in extraterrestrial contact issues was part of a strategic study as Fitts claims, or simply part of ad hoc discussions as Petersen contends. Nevertheless, the official Board minutes released by Fitts does lend support to her main claim that the US Navy commissioned a project with the Arlington Institute for its expertise on wild card future scenarios involving extraterrestrial contact. It can therefore be concluded with some confidence that official efforts began in 1998 by the US Navy to prepare for a world where extraterrestrials exist and are living among the human population.