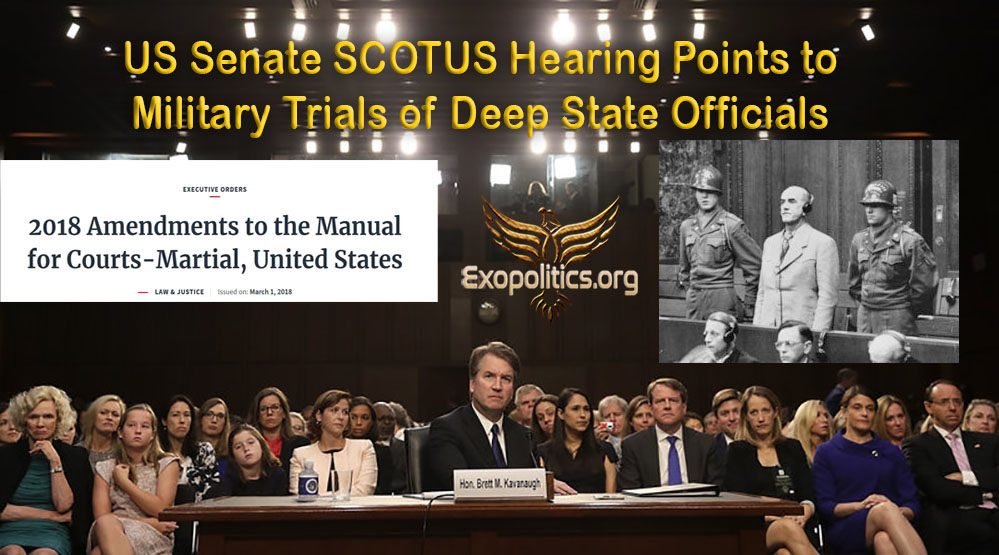 Written by Dr Michael Salla on September 6, 2018. Posted in Featured, US Politics

In a US Senate Confirmation hearing held on September 5, Supreme Court nominee Brett Kavanaugh was asked a series of questions that point to future cases involving the legality of military justice being used against U.S citizens. The military intelligence group QAnon has linked the questioning to an Executive Order by President Donald Trump that creates a legal basis for military justice being used against Deep State officials.

The linked Youtube video, which mysteriously became unavailable (blocked?), showed Senator Lindsay Graham asking Judge Kavanaugh about the legality of the military justice system being used against U.S. citizens who have been colluding with enemy forces. Kavanaugh explained how the Supreme Court has in the past created legal precedents for military justice being applied in such a way.

QAnon referred to Trump’s Executive Order issued on December 21, 2017 creating a “national emergency” in the US due to “serious human rights abuse and corruption around the world”. The Executive Order makes clear that all involved in such abuses constitute an “unusual and extraordinary threat” to U.S. national security:

I, DONALD J. TRUMP, President of the United States of America, find that the prevalence and severity of human rights abuse and corruption that have their source, in whole or in substantial part, outside the United States, such as those committed or directed by persons listed in the Annex to this order, have reached such scope and gravity that they threaten the stability of international political and economic systems…The United States seeks to impose tangible and significant consequences on those who commit serious human rights abuse or engage in corruption, as well as to protect the financial system of the United States from abuse by these same persons.

I therefore determine that serious human rights abuse and corruption around the world constitute an unusual and extraordinary threat to the national security, foreign policy, and economy of the United States, and I hereby declare a national emergency to deal with that threat.

In addition to blocking the financial assets of all that are linked to such abuses, the Executive Order justifies the military justice system being used against all individuals, including US public officials, that participate in subversive acts at a time of a “national emergency”.

[Cause]
Define ‘Subversion’.
The act of subverting : the state of being subverted; especially : a systematic attempt to overthrow or undermine a government or political system by persons working secretly from within?
[Effect]
https://www.whitehouse.gov/presidential-actions/executive-order-blocking-property-persons-involved-serious-human-rights-abuse-corruption/

QAnon is pointing out that U.S. public officials, both former and present, who are linked to subversive acts can have their financial assets frozen as stipulated by the December 21, 2017 Executive Order.

An example of subversion is an incriminating August 15, 2016 text by FBI counterintelligence agent, Peter Strzok, which explicitly states to another FBI official, Lisa Page, that an “insurance plan” had been developed by the Deep State to prevent Donald Trump from assuming or fulfilling the office of the President:

I want to believe the path you threw out for consideration in Andy’s office that there’s no way he gets elected — but I’m afraid we can’t take that risk. It’s like an insurance policy in the unlikely event you die before you’re 40….

The roles of Strzok and other officials in developing an insurance plan through the concocted “Steele Dossier” used in gaining FISA Court warrants is currently under investigation by the House Intelligence and Judiciary committees.

It is what QAnon went on to say in post 1926, which raises the possibility that the military justice system is going to be used against public officials accused of subversion against the incoming Trump administration.

QAnon linked and quoted from Trump’s March 1, “2018 Amendments to the Manual for Courts-Martial”:

Sec. 12. In accordance with Article 33 of the UCMJ, as amended by section 5204 of the MJA, the Secretary of Defense, in consultation with the Secretary of Homeland Security, will issue nonbinding guidance regarding factors that commanders, convening authorities, staff judge advocates, and judge advocates should take into account when exercising their duties with respect to the disposition of charges and specifications in the interest of justice and discipline under Articles 30 and 34 of the UCMJ. That guidance will take into account, with appropriate consideration of military requirements, the principles contained in official guidance of the Attorney General to attorneys for the Federal Government with respect to the disposition of Federal criminal cases in accordance with the principle of fair and evenhanded administration of Federal criminal law.

QAnon is here saying that the military justice system will work with U.S. Attorneys, such as Utah’s John Huber, in investigating and prosecuting criminal cases brought against individuals accused of subversion and/or linked to the national security threat posed by “serious human rights abuse and corruption around the world”.

In post 1926, QAnon next referred to public and corporate officials that have been removed from office, alluding to secret indictments involving them, and the construction of new facilities at Guantanamo military prison for the most dangerous or recalcitrant officials.

What makes QAnon’s post particularly significant is the existence of the “+45,000 sealed indictments” which involve criminal charges against Deep State officials accused of subversion and/or “serious human rights abuse and corruption around the world”.

As I have shown in a previous article, the number of sealed criminal cases is extraordinarily high when compared to earlier years, and that a majority of the more than 50,000 sealed cases do involve indictments against Deep State officials.

From QAnon’s recent posts, it is becoming clearer that some of the indictments involve Deep State officials such as Strzok being charged with subversion, and being tried in military courts.

Finally, in post 2093, QAnon points to Hillary Clinton (aka HRC) being in a panic suggesting that she is also likely to be subjected to military justice for both subversion and involvement in “serious human rights abuse and corruption around the world”.

Since October 28, 2017, QAnon has been dropping breadcrumbs about human rights abuses and corruption by Deep State officials that have been subjected to secret grand jury investigations and indictments. The latest series of posts suggest that there is a definite countdown to when the secret indictments will be unsealed, and that the subsequent trials will involve some former public officials being subjected to military justice  through Courts-Martial rather than Military Tribunals as previously thought.

The general public will learn for the first time the true extent of the criminal acts of Deep State officials when it comes to human rights abuses, corruption around the world, and the effort to subvert the incoming Trump administration. QAnon’s breadcrumbs only give a bare outline of facts that will deeply shock the general public as documentary evidence is publicly released for impending criminal and military trials.

As to when the sealed indictments will be unsealed, it’s worth noting that the reform to the “2018 Amendments to the Manual for Courts-Martial” will take effect on January 1, 2019. Senator Graham’s line of questioning of Judge Kavanaugh suggests that the use of the military justice system against U.S. civilians is likely to be one of the legal issues that the new addition to the Supreme Court will be soon adjudicating. One of the most significant effects of the looming criminal trials in civilian and military courts of Deep State officials is how all this will impact on a decades-long policy of suppressing the public release of advanced technologies associated with secret space programs, one of which  QAnon recently credited with shooting down a missile involved in a false flag attack on Hawaii.

In addition, over 5,700 patent applications that could revolutionize the transportation and medical industries, have been held up and classified due to national security orders by Deep State officials. Much more will likely be also revealed about the September 11 false flag attack, the Kennedy assassinations, the hidden history of Antarctica, and the truth about extraterrestrial life.