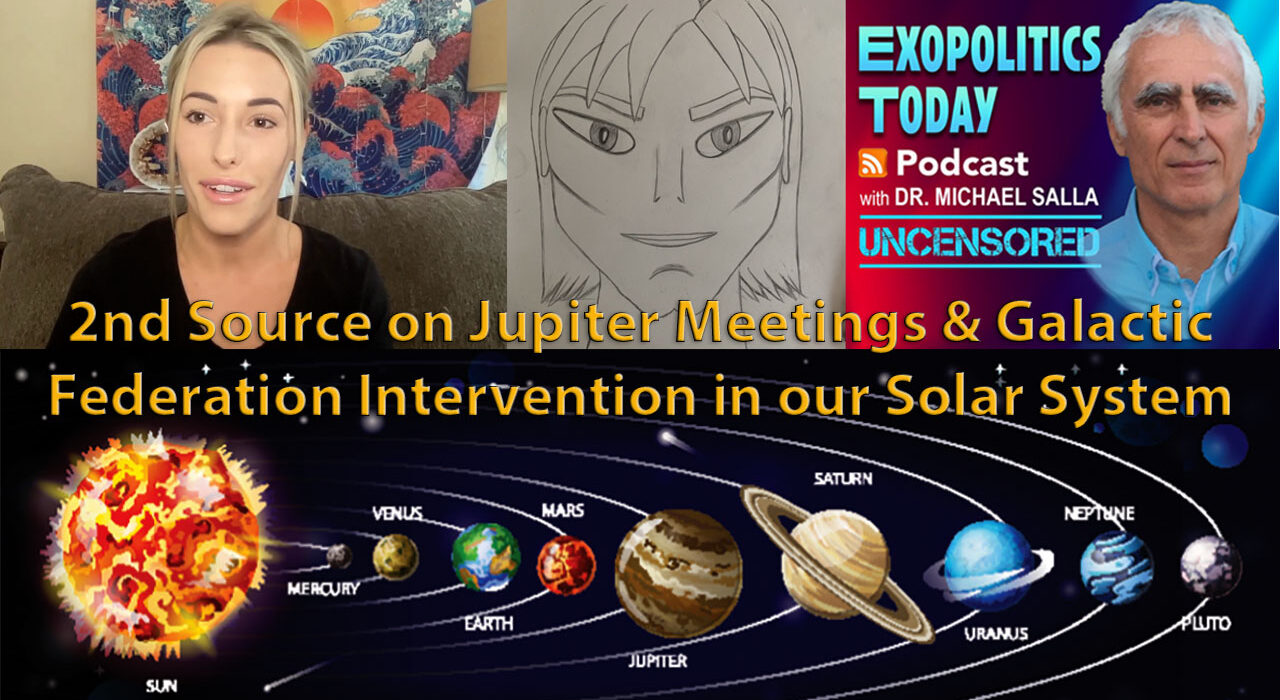 A second source on an alleged set of meetings above Jupiter has come forward to share more details of what occurred and more startling information about the Galactic Federation of Worlds intervening in our solar system. Megan Rose is a registered nurse in the US State of Florida who claims to be an extraterrestrial contactee with the Galactic Federation.

In this Exopolitics Today interview, Megan begins by discussing two alien abduction experiences at ages 5 and 9, respectively, where she was rescued by members of the Galactic Federation. She identifies her primary rescuers as two Galactic Federation pilots and warriors, Val Nek and Thor Han.

In 2019, Megan regained memories of her childhood abductions and rescues. She described a physical implant she was given which enables her to remain in touch with Val Nek who regularly communicates with her in a similar manner to how Thor Han communicates with Elena Danaan, another contactee with the Galactic Federation.

In the interview Megan discussed a telepathic message (see below) she received from Val Nek with additional details of the July 2021 meetings on Jupiter. She provides new details on Galactic Federation intervention on the Earth, Moon and Mars. Megan Rose’s information provides a crucial second source on the Jupiter meetings, and corroborates information earlier revealed by Elena Danaan.

The two telepathic messages from Val Nek read out during the interview are the following. The first was received by Megan Rose in mid-August

“Yes, I was there representing the federation. Helping facilitate things and negotiations between corporations and the alliance. The corporations, those three men, (Bezos, Musk, Branson) among other smaller corporations were chosen to manufacture technology like spacecrafts to serve humanity and help defend earth so that the federation can hand over the responsibility to the Terran people. I have been working to train their military in space travel and navigation and also training them to help use the technology that will be manufactured. I, personally, have been working alongside Terran leaders to help organize their military and choose military leaders who have the consciousness to understand benevolent space beings and how to make peace in the galaxy.

The corporations chosen are under tight strict control. They are not allowed to waiver from the agreements made. The consequences to breaking the agreements, in any way, I cannot say. But I can assure the Terran people that the corporations do not want to make enemies of the federation. These corporations were chosen because time is of the essence, we need to mass manufacture space crafts and supplies to help defend earth and quickly start training the Terran military (US navy/space force). Please understand that it is a very large operation and I have been working very hard to ensure the success of humanity. These corporations have made agreements with the alliance and have agreed to manufacture the necessities in a timely manner. Their businesses, in other parts of neighboring planets around Terra, have completely collapsed and been dismantled. Anything that does not benefit humanity has been cleaned out. We are ready to move forward. This is very good news, I salute you.” -Commander Val Nek

“The moon: The moon was liberated some time ago and put in the hands of the alliance. The US is in charge of it, in charge of arranging all the different countries on the moon. There are sections on the moon, safety zones, where meetings can take place between delegates. There are technologies being released and tested on the moon. These technologies from the GFW are put in the hands of the alliance to be used in service to humanity. The use of these technologies, the agreement to use them, is very strict and must be adhered to. There are bases there, GFW is in orbit there, training them.” – Commander Val Nek