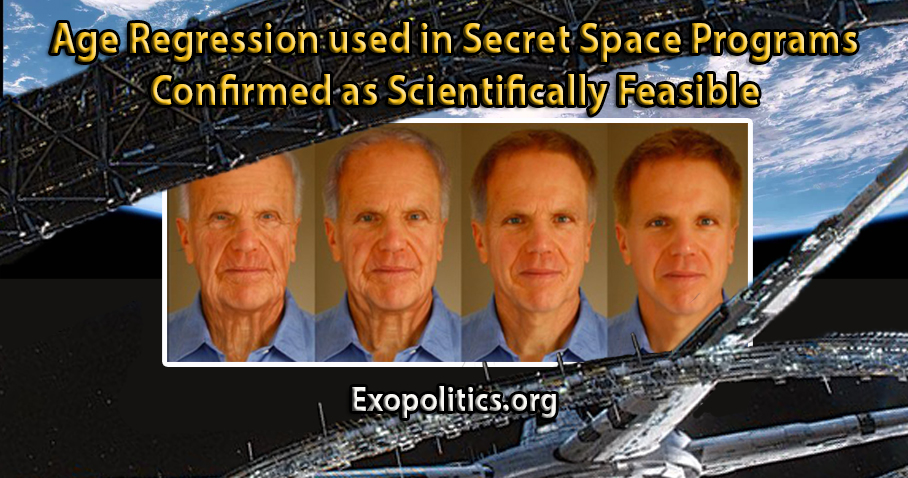 Due to recent breakthroughs in genetic research, the claims of three whistleblowers, who say they underwent an age-regression process in secret space programs, have become that much more plausible. The whistleblowers, Corey Goode, Randy Cramer and Michael Relfe, all say that they were age-regressed to become 20 years younger at the end of their respective tours of duty in secret space programs.

Recently, geneticists have identified the genes that control the aging process, and in stunning experiments, the results of which have been released in peer reviewed scientific journals, have demonstrated that they were able to reverse the aging process to varying degrees of success.

The results of these experiments make it plausible that the three whistleblowers did indeed undergo an age-regression process using classified medical technologies in secret space programs, as they claimed.

The lead genetic scientist in the publicly announced age reversal studies is Dr. David Sinclair, who discussed in an interview the results of his genetic experiments first conducted on mice:

He explained how this process could also be done safely for humans:

We’ve gone from mice into early human studies actually. There have been some clinical trials around the world, and we’re hoping in the next few years to know if this will actually work in people as well … They show that the molecules that extend lifespan in mice are safe in people.

Professor Sinclair went on to say in his interview that drugs based on the nicotinamide mononucleotide (NMN) molecule could be successfully developed “to restore youthfulness in human cells.”

Sinclair’s view that NMN based drugs will eventually be developed for safe use by humans is stunning in its implications. He may well be in the midst of developing the fabled elixir of life, which accounts for him quickly being elevated into the world’s 100 most influential people according to Time Magazine.

It’s important to point out that Sinclair’s pioneering genetic research is open source and unclassified. This means that is very likely, if not almost certain, that classified research in the field of age reversal/regression technology is far more advanced than anything achieved by Sinclair and his peers.

In several private interviews with William Tompkins, a former U.S. Naval Intelligence operative who subsequently worked with leading aerospace contractors for more than four decades, he revealed that he worked on a classified study developed by the company, TRW, on age regression drugs from 1967-1971.

Tompkins said that he first came across the development of age-regression technologies when he participated in the debriefings of U.S. Navy spies, from 1942 to 1945, at the Naval Air Station, San Diego. These spies revealed the existence of age-regression studies that were then secretly underway in Nazi Germany.

At the time, Tompkins job was to distribute briefing packets to U.S. companies and think tanks with expertise in the areas used by the Nazis for developing their breakthrough technologies. Tompkins said that the Massachusetts Institute of Technology (MIT) was among the academic research centers delivered briefing packets by him. Therefore it is possible that scientists at MIT have been aware of the Nazi age-regression studies since 1942!

Significantly, Sinclair’s breakthrough in age-regression studies was achieved while he was a post-doctoral fellow at MIT under Dr. Leonard Guarente at M.I.T.  Was this merely coincidence, or was Sinclair helped or encouraged while at MIT to develop the insights into the age reversal potential of genetic manipulation?

Recently, Tompkins has privately disclosed to me that classified “age-regression” drugs have been developed. He says these drugs have been used for some time in the “20 year and back” tours of duty in secret space programs. This is consistent with the age-regression process described by Goode, Cramer and Relfe, which involved medication administered to them over a two week period where they were physically immobilized.

Even more recently, Tompkins says the drugs have been refined so that they can be used for more extensive age-regression periods. For example, reversing a 90 year old back to where s/he has the physical body of a 27 year old is now possible. Tompkins says that there is a covert U.S. Navy sanctioned disclosure process underway to release these age-regression technologies into the public sector. It is, therefore, possible that Sinclair’s research may have been stimulated by this covert Navy initiative during his time at MIT.

At the very least, Sinclair’s pioneering age-reversal experiments and identification of the NMN molecule that can be used for developing “age-regression” drugs means that the claims of Goode, Cramer and Relfe no longer appear so outlandish, and are indeed scientifically feasible.