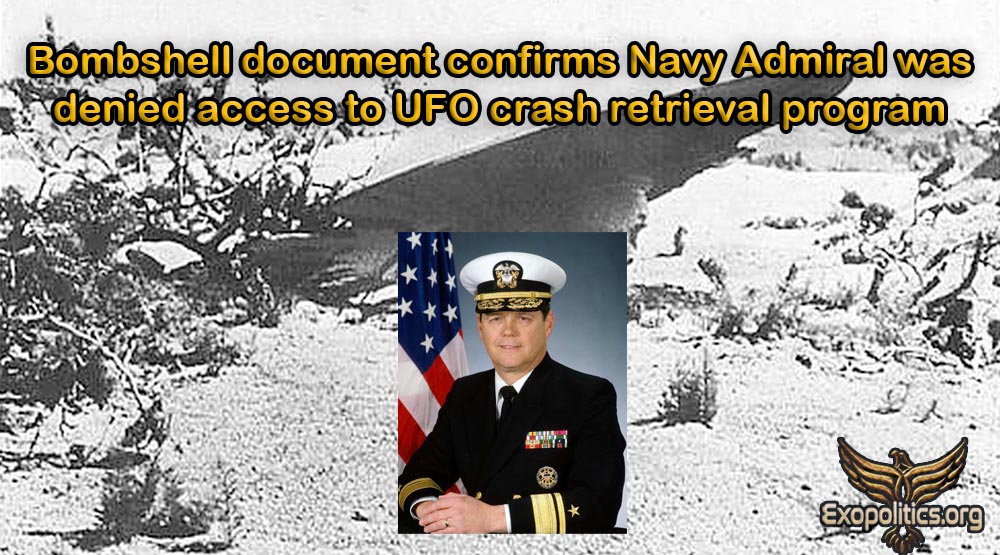 Written by Dr Michael Salla on June 15, 2019. Posted in Featured, science and technology

The transcript of a conversation between a US Navy Vice Admiral and a leading scientist discussing a failed attempt to gain access to a highly classified program involving a crashed extraterrestrial craft has been recently released online. The conversation took place on October 16, 2002, and involved the retired Director of the Defense Intelligence Agency, Vice Admiral Thomas Wilson, speaking with Dr. Eric W. Davis, a scientist working on the feasibility of exotic propulsion systems with EarthTech International, an advanced technology think tank established in Austin, Texas.

In the 15 page document comprising the transcript, summary notes and an accompanying letter, Davis describes what Wilson told him about an April 10, 1997 “briefing” where he (Wilson) received information from former Apollo astronaut Dr. Edgar Mitchell and Dr. Steven Greer (founder of the Disclosure Project) about a classified UFO program that they had codeword information about. At the time, Wilson was a Rear Admiral (upper class); Deputy Director of the Defense Intelligence Agency; and Vice Director for Intelligence (VJ2), for the Joint Chiefs of Staff, a position he held from November 1994 to September 1997.

When Wilson inquired into the program’s existence from a regulatory body created for Special Access Programs, he learned it involved a corporate Research and Development effort involving a retrieved extraterrestrial craft but was denied access by three corporate officials working for a major US aerospace contractor.

The 1997 briefing was first publicly discussed by Greer and his associate Shari Adamiak only a month after it occurred and was corroborated by Mitchell over a decade later. In a May 1997 interview with Art Bell on Coast to Coast AM Greer said:

Joint Chiefs of staff level fellow that I briefed while I was in Washington about a month ago … After he looked at all this and heard the witness, he turned to us and said: ‘Well I have no doubt this is true but I am horrified that I hadn’t known about it’…Because of his position. And very, very senior … I can’t say who it was but a very, very senior position…And then they begin to come to grips with well: ‘Who the hell does know about it, what is going on here?’ And then they become frighten[ed].

“It’s the National Reconnaissance Office document.  …..The reason it’s important is not so much for its content… …..  Take note of the distribution list, please. ….. …….’Blue Fire’, which is a code name, 1991, Commander’s Net, Royal Op’s, Cosmic Op’s…so, cosmic clearance…you’ve heard of this? It’s not a myth.  It’s real.  Maj Op’s, MAJI…It’s MAJIC Op’s.  It goes through a whole bunch of them…Nellis Division, all these code numbers and you get down to some really interesting things. … this secret document went to the admiral [Admiral Tom Wilson] prior to our meeting, and he actually recognized one of these entities and made an inquiry, and it was being run by a contractor.  …..  And the contractor…one of these corporate contractors…when he called them up, he said, ‘I’m Admiral Tom Wilson…at that time he was Head of Intelligence for the Joint Chiefs of Staff… I want to be read into this project.’  Guess what happened?  They said, ‘Sir, you don’t have a need to know.’  This is the guy who’s supposed to give the intelligence briefings for the Joint Chiefs of Staff of the United States.  He was told, ‘You don’t have a need to know’… and Admiral Wilson said, ‘Goddamn it, if I don’t have a need to know, who does?’  They said, ‘Sir, we cannot discuss this with you further’ and they hung up and blocked his line.  This all happened before the stand-up meeting I did for [him with] Edgar Mitchell…6th man to walk on the moon…myself, my military adviser, and a few other people met with the Admiral in what’s called a ‘stand-up’ briefing.  I was doing the presenting.  It was supposed to be 45 minutes.

In 2007 Mitchell began publicly confirming that the briefing had indeed taken place, corroborating what Greer had revealed a decade earlier.

A detailed chronology of articles and interviews referring to the 1997 Wilson briefing is provided by Croatian UFO researcher Giuliano Marinkovic.

The transcript of the 2002 conversation between Wilson and Davis was first discussed in radio interviews by UFO researchers Grant Cameron and Richard Dolan in December 2018. Cameron said he was given the 15 page document, which he shared with Michael W. Hall a former lawyer and Superior Court judge. Hall has given several interviews in March 2019 discussing the document’s origins and authenticity.

Cameron, Dolan, and Hall believe the document is authentic, and its consistency with what Greer and Mitchell had earlier revealed does point to this. I contacted Dr. Eric Davis to comment on the document’s authenticity, and he replied saying: “I have no comment on this.” If the document was a hoax, I see no reason why Dr. Davis would not have said so.

All this leads me to conclude that the document is an authentic transcript of what Dr. Davis and Admiral Wilson discussed back in 2002 about the April 1997 meeting and Wilson’s subsequent investigation. The transcript was very recently released online and are available for public viewing.

The transcript, summary notes, and accompanying letter provide compelling documentary support that the 1997 briefing had occurred, exactly as Greer and Mitchell had reported up to two decades earlier. Importantly, the notes substantiate one of Greer’s major claims that he was regularly briefing senior officials in the Clinton Administration about the UFO coverup – something many UFO researchers had previously dismissed or ridiculed.

The transcript provides a fascinating insight into how a US Navy admiral who was Vice Director for Intelligence (VJ2), for the Joint Chiefs of Staff at the time, was denied access by corporate officials to a classified UFO program, which he firmly believed fell under his field of responsibility.

The briefing and unsuccessful investigation did not negatively impact Wilson’s career. Two years later, in May 1999, Wilson was promoted to Vice Admiral and became the 13th Director of the Defense Intelligence Agency (DIA), a position he served in until July 2002.

Three months after his retirement, Wilson met with Davis to discuss the 1997 meeting and its aftermath. In the transcript, we learn about Wilson’s perspective on what had happened.

Presumably, the recording and transcription of Wilson and Davis’ conversation were intended for a small audience at EarthTech International, founded by Dr. Hal Puthoff, which was studying exotic propulsion systems, and releasing feasibility studies of them to interested scientists and journals.

In 2009, Davis and EarthTech included some of these exotic propulsion feasibility studies as Defense Intelligence Reference Documents, two of which were first leaked online in December 2017 by Corey Goode who says a confidential DIA source gave him them.

In the transcript, Davis (EWD) describes how Wilson (TW) began by confirming that the April 1997 meeting did take place and involved Greer, Mitchell, and US Naval Reserve Commander Willard H. Miller, who was Greer’s top military advisor.

Miller played a critical role in the various “UFO briefings” Greer gave senior officials and politicians during the Clinton administration:

Wilson was here acknowledging that the serving Director of the Defense Intelligence Agency, Lt. General Pat Hughes, also sat in on the meeting. After the meeting broke up, Miller and Wilson continued to discuss issues that had been raised:

TW: Yes, Miller asked the question on MJ-12/UFO cabal – crashed UFO. Confirmed he called Miller ca. late June ’97 and told that he/Miller was right – there is such an organization in existence. [Transcript/Summary p. 1]

Wilson was here acknowledging that after being informed about the existence of the classified UFO program by Greer and Mitchell in April 1997, he had inquired into the program’s existence, and discovered that MJ-12 was real and that there indeed was a UFO cabal running classified operations involving crashed UFOs. This accounted for why Admiral Wilson later failed to gain access to the crashed UFO program, as explained later in Davis’ summary notes.

The significance of all this is that Admiral Wilson did not want the details of what he learned during his investigation of the classified program that Greer and Mitchell had first brought to his attention becoming public. By telling Greer, Commander Miller had in Wilson’s opinion broken trust shared between naval intelligence officers to keep the information confidential. That is why he was so angry.

However, if it were not for Miller taking the risk he had, Greer and the world would probably not have learned the truth of what happened, and how corporate contractors had sidelined Wilson and US naval intelligence over a classified reverse engineering program of a crashed extraterrestrial vehicle.

In part two, I review what Admiral Wilson told Dr. Davis about the classified UFO crash retrieval program and its significance.